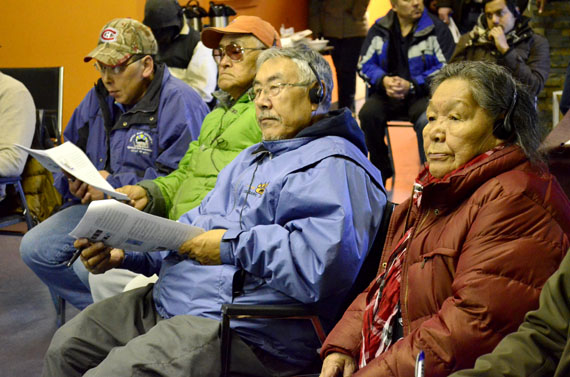 Alacie Joamie, Simon Nattaq and Mosesee Atagoyuk of Iqaluit at a meeting held by the Nunavut Impact Review Board in Iqaluit on the afternoon of Sept. 10 to seek opinions on the Qulliq Energy Corp.’s hydroelectric development plans for Iqaluit. (PHOTO BY JIM BELL)

The Qikiqtani Inuit Association and the Community Lands and Resource Committee in Iqaluit said Sept. 25 that they oppose Qulliq Energy Corp.’s plans to develop a hydroelectric project at Nunngarut (Armshow South,) a popular hunting and camping area close to the Bay of Two Rivers.

The QIA said it “encourages” the power corporation to look for alternative sites in the region that can potentially be used to hydro development.

“The initial plans to build a dam at Nunngarut was opposed by many in Kimmirut and Iqaluit as it is a place that is frequented by Kimmirummiut and Iqalummiut for fishing and hunting activities. Travelling between Iqaluit and Kimmirut would also be threatened as the lake at Nunngarut is the only viable route to cross.

“For these reasons we have concluded that the impact on Inuit would be too great,” said Simon Nattaq in a news release.

Nattaq chairs Iqaluit’s Community Lands and Resource Committee, or “CLARC,” which advises about land management and development on Inuit-owned lands.

Under QEC’s proposal, they would build a hydroelectric dam at Jaynes Inlet first, and after 2030, build a dam and power station at Armshow South.

But the QIA said in a Sept. 25 news release that it will not approve any permits to build at Armshow South, which is partially located on Inuit-owned lands and within Katannilik Territorial Park.

The CLARC and QIA say they want the QEC to resubmit their hydroelectric project proposal without the Armshow South dam component.

The QIA announcement follows a Sept. 10 consultation with the Nunavut Impact Review Boardd where Inuit elders said they feared the effects of a hydroelectric project near Iqaluit.

They also said at the meeting that QEC should negotiate an Inuit impact and benefit agreement with QIA.

“I believe we need an IIBA in the millions,” Nattaq said at that meeting.

On Sept. 18, the QIA provided comments on QEC’s hydroelectric dam proposal, which is currently under a Part 5 review by the NIRB.

In the letter, the QIA said it would support community members’ opposition to the proposal due to the location. And QIA said the proposal should to be sent back to the QEC for changes.

The power corporation has been planning a hydroelectric project near Iqaluit since at least 2005.

The latest version of the QEC’s plan would see them spend up to $450 million on two dams and power stations over the next 20 years or so: the first at Jaynes Inlet (Qikirrijaarvik), about 40 kilometres from Iqaluit, and the second, planned for the decade following 2030, at Armshow South (Nunngarut) near the Bay of Two Rivers, 20 km southwest of Iqaluit.

Those sites would be connected to the city by at least 84 km of power lines.