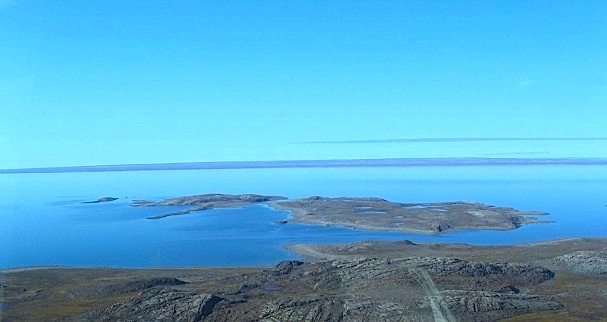 The Qikiqtani Inuit Association now appears ready to accept the choice of Steensby Inlet as a port for the huge Mary River iron mine project. (FILE PHOTO)

The tone of the final comments handed May 30 to the Nunavut Impact Review Board on Baffinland Iron Mines Corp.’s Mary River iron mine project shows the final hearings scheduled for next month in Iqaluit and Igloolik may not be as confrontational as some of the earlier meetings about Baffinland’s environmental impact statement.

A look at the nine final comments shows that the Qikiqtani Inuit Association, which has often sounded critical of the project in the past, is now offering some encouragement to the mining project that would see 18 million tonnes or more of iron ore from Mary River shipped out of Steensby Inlet for markets in Europe and Asia over a period of least 37 years — and some predict up to 100 years.

The giant iron mine project would also see the Canadian Arctic’s first railway from the Mary River mine site to the Steensby port.

“QIA feels that appropriate mechanisms are in place to effectively monitor and manage the Mary River Project in an acceptable manner,” the QIA said May 30.

The organization representing Inuit in Nunavut’s Baffin region also said that “continued work and collaboration after the permitting process, and throughout the life of mine,” would be “critical to the success of this project.”

The QIA also said it would accept a port at Steensby Inlet.

“While a number of views continue to be expressed by Inuit regarding the port-site, QIA understands that a port-site at Steensby Inlet may in fact be the most viable option for BIMC,” the QIA said.

But the QIA said it still wants to see an alternative to storing the first year’s worth of fuel in a tanker offshore at Steensby Inlet.

The QIA and Baffinland have also agreed to develop working groups in the areas of marine, terrestrial, and socio-economics, the QIA noted.

The following includes some highlights from the other comments submitted to the NIRB:

• Transport Canada said the Mary River project’s 149-kilometre railway, which will carry ore from the mine site to the port, looks “feasible,” although TC questioned the plan to carve out two tunnels for the railway, instead of taking a longer and possibly more expensive route. Caribou migrations could “require immediate attention and possible changes to railway operations such as reduced speed or limiting train traffic,” TC said;

• The Department of Fisheries and Oceans’ 61 pages of detailed comments show the DFO “remains concerned that the risks to marine mammals, particularly from year-round shipping, have been underestimated and that the mitigation measures and adaptive management proposed to date will not be sufficient to adequately manage those risks;”

• Environment Canada’s 67 pages of comments said “the lack of information available in some areas will increase the necessity for effective monitoring and adaptive management;”

• The Government of Nunavut doesn’t like the idea of over-wintering fuel in Steensby Inlet. The GN also said “any in-migration will result in adverse effects on the capacity of the public healthcare system and increased costs to the GN.” The GN remains concerned about security on site. It wants to see a working group on health to develop an MOU between Baffinland and the GN’s department of Health and Social Services and similar collaboration between Baffinland and its department of Justice and the RCMP.

“Our EIS [Environmental Impact Statement] team is still currently reviewing the recent submissions,” Greg Missal, vice-president of corporate affairs for Baffinland, told Nunatsiaq News. “However, we are encouraged by the hard work and collaboration by all parties to reach this point. We will be working toward preparing for the Final Hearings and our goal of continuing to advance the Mary River Project through the approvals process.”

To consult all the final comments, you can go to NIRB’s FTP site.

Next week you can also weigh in on Baffinland, as Isuma TV’s Digital Indigenous Democracy project continues its live call-in shows on Baffinland June 5, 6 and 7. For the full schedule or to log on to the radio stream go here.

The call-in shows will consider questions such as “Have Inuit had their say? and “Walrus, wildlife and Baffinland?”