Inuit org: We’re not a dumping ground for space-borne waste 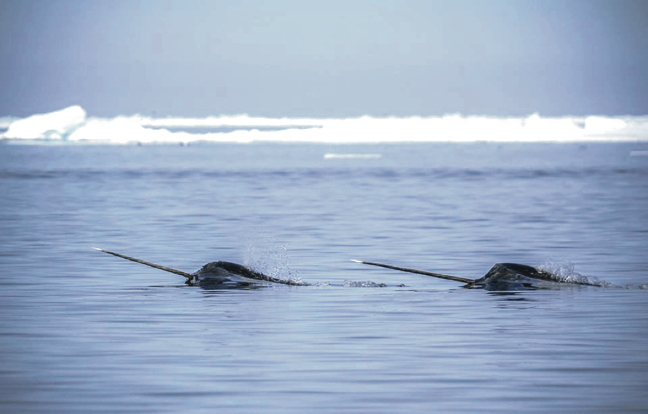 The Inuit Circumpolar Council worries that a piece of toxic Russian space debris set to fall into Baffin Bay June 4 could pose a threat to people and wildlife. (FILE PHOTO)

A highly toxic piece of Russian space junk that’s set to fall June 4 into Baffin Bay between Ellesmere Island and Greenland poses a danger to Inuit and to Arctic wildlife, the Inuit Circumpolar Council said June 2.

“This rocket will not be falling into no-man’s land. This is a vital body of water that is integral to the food supply of Inuit communities in Greenland and Canada,” Okalik Eegeesiak, ICC’s international chair said in the statement.

“Inuit live here, Inuit use the animals in these waters to feed our families. This is our home,” Eegeesiak said.

Nunavut’s minister of Community and Government Services, Joe Savikataaq used a member’s statement in the legislature June 2 to reassure Nunavummiut that the federal government is monitoring the situation and would deal with any space junk that ended up on land or on sea ice.

He said it’s expected to fall into the ocean about 158 km from Grise Fiord.

But Savikataaq admitted Nunavut, which only learned about the situation this week, has been mostly left in the dark up until now.

“Lancaster Sound is known to be inhabited by a wide variety of animals,” said Tununiq MLA Joe Enook. “At least it would have been nice to have been informed earlier because when you hear it in national media, you don’t know what’s going to be happening in your community.”

Savikataaq said Nunavut does not have facilities to observe objects falling from space, “but we will be working and communicating closely with the government of Canada… It’s a Russian rocket. We have very little control over it. I agree with the member that it’s toxic and it’s hazardous and it should not fall in Nunavut waters.”

The minister added that if a ship were to dump hazardous waste in Nunavut waters, “they would be in trouble.”

Even if the junk lands in the ocean, it’s still a concern, said Quttiktuq MLA Isaac Shooyook, because currents in the polynya are strong and move objects around.

“There are a lot of different kinds of wildlife, large ones and small ones. Whether it lands on ice and water, the contaminated material will sink to the bottom but it can spread to the wildlife,” Shooyook said. “I am concerned about it along with my other High Arctic residents.”

Russia plans to launch an old SS-19 rocket June 4 to carry a scientific satellite into orbit. The first stage of the rocket is expected to fall into the Barents Sea north of Norway.

The second stage will fall between southern Ellesmere Island and Greenland on Saturday, according to a NOTAM, or a Notice to Airmen about a hazard, issued May 27 to the aviation industry.

Alarm bells began to ring in northern Canada after Michael Byers, a professor of international law at the University of British Columbia, published an op-ed piece about it May 18 in the National Post.

That’s because that second piece of space junk will likely carry hundreds of litres of a deadly fuel called hydrazine, which is so toxic it can be handled only by technicians wearing pressurized hazmat suits, Byers said.

The SS-19 rocket, an old intercontinental ballistic missile left over from the Cold War, was first designed in the 1970s to carry nuclear warheads. But Russia now uses it for commercial satellite launch contracts.

“The problem is that these SS-19s use a fuel that Western countries have been moving away from because of its high toxicity. The Russians continue to use these SS-19s because they have this stockpile and that provides them with a low cost way of fulfilling their commercial launch contracts,” Byers told Nunatsiaq News.

Byers said it’s not entirely clear right now if the debris will come down on the Canadian or Greenlandic side of the boundary that separates the two countries.

But wherever it lands, it will fall into marine territory covered by each country’s environmental laws. In Canada’s case, that’s the Arctic Waters Pollution Prevention Act, which former Prime Minister Pierre Trudeau’s government passed in 1970.

“That does gives us extensive pollution prevention jurisdiction,” Byers said.

Byers said that no one knows how hydrazine behaves in Arctic conditions, so he’s not prepared to characterize the incident as an environmental disaster.

But he said it’s still a serious incident that Canada should pay attention to.

But that area of Baffin Bay is regularly used by Russia for dumping space junk. Byers said his research shows that on at last two occasions in the past, the Harper government issued diplomatic protests when similar debris landed in Baffin Bay.

“The Harper government was aware of these incoming stages and sufficiently concerned to issue a diplomatic protest,” he said.

But he also said federal officials until now appear to have been unaware of the environmental dangers posed by hydrazine.

“They know that there was incoming space debris, but they assumed it was harmless,” he said.

And Russia appears to have assumed that Baffin Bay is an uninhabited area that is infrequently used.

Kuupik Kleist, a former Greenland premier who sits on ICC’s Pikialasorsuaq Commission, set up in January 2016 to find ways of protecting the nearby North Water polynya, definitely sees the issue as an environmental threat.

“The Arctic should not be seen as a global dumping ground for anyone’s waste,” Kleist said in the ICC statement.

The other Pikialasorsuaq commissioner, former Nunavut Premier Eva Aariak, said dumping space debris in the area should not be permitted.

“You would not be allowed to dump this material from a ship or from the land so the same thing should apply from space,” Aariak said.

Meanwhile, the Government of Nunavut has issued an advisory, saying the toxic debris will likely come down between 9:45 a.m. and 10:45 a.m. June 4.

“It is expected that the debris will fall outside of Canadian territorial waters and is considered a very low risk event. There should be no harmful effects to any community, the environment or animals near the impact area,” the GN advisory said.