Inuit must be the primary beneficiaries of development, NTI president says 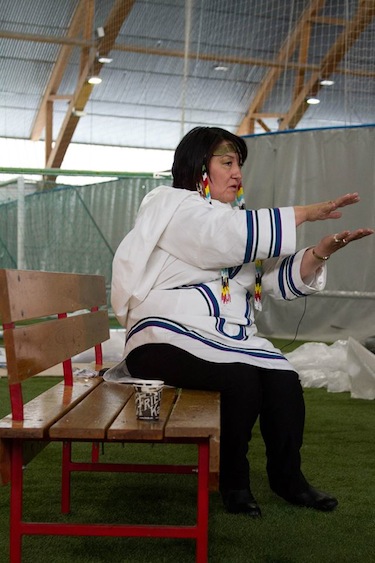 During this past week’s Global Preparatory Indigenous Peoples Conference in the Arctic city of Alta, Norway you could see the diversity — and pride — of indigenous peoples from around the world who attended the gathering in their traditional garments, which included headbands of flowers and lavishly embroidered gowns as well as sealskin vests and amautiit.

Inuit at the conference called for indigenous people to derive more benefit from resource development and the use of their traditional knowledge.

The 600-plus delegates to the gathering, which began June 9, wrapped up their deliberations June 12 with approval of the Alta Declaration.

That declaration contains recommendations for the United Nations World Conference on Indigenous Peoples, slated for the UN headquarters in New York City, Sept. 23 to Sept. 24, 2014.

Then, members of the Arctic Caucus, which included ICC president Aqqaluk Lynge, suggested recommendations that should be included in the Alta Declaration from the Inuit point of view.

Towtongie and Tatiana Achirgina, president of ICC-Chukotka, addressed delegates, asking them to support for a strong stand on the rights of indigenous peoples, particularly with respect to resource development.

“This development has to happen on the premises of the Arctic peoples as the decision-makers, and in a way that ensures our self-determination over our land, waters, territories and resources,” they said. “We must be the primary beneficiaries of the industrial development taking place, both on our lands and waters, and with responsibilities along with rights.”

They also said that nations and states must uphold obligations to share revenues from resource development, at the same time as they grant indigenous peoples the ability to say “no” to developments on indigenous lands, water and lands.

“Indigenous Peoples have to share in the distribution of wealth generated by resource extraction,” Towntongie and Achirgina said.

The two also asked for more emphasis on climate change in the conference’s final declaration.

That’s because climate change also affects the traditional knowledge which is passed on to youth from elders, they said.

“The knowledge which has sustained the Indigenous Peoples of the Arctic is being impacted by the unsustainable industrial contamination and extraction. The transmission of culture relies on our climate and this includes the total cosmology, sky, wind, land and waves, ice and snow,” they said.

The Alta Declaration identifies four themes for the September 2014 conference:

• UN implementation of the rights of indigenous peoples by the creation of a UN body “with a mandate to promote, protect, monitor, review and report” on the rights of Indigenous Peoples, and the establishment of an international mechanism “to provide oversight, redress, restitution and the implementation of treaties, agreements and other constructive arrangements” between indigenous peoples and governments;

• recognition of indigenous peoples’ priorities, based on the “full and effective recognition of their rights to lands, territories and natural resources and the connection between customs, belief systems, values and traditional knowledge;” and,

But he also recommended “the most important good achievements of Indigenous Peoples’ efforts over the last decades” be highlighted, because he said indigenous Peoples “have been instrumental in the advocacy for and recognition of indigenous peoples’ rights, and has at all times participated in international forums and processes.”

For more information on the Alta conference, go to the WCIP website.