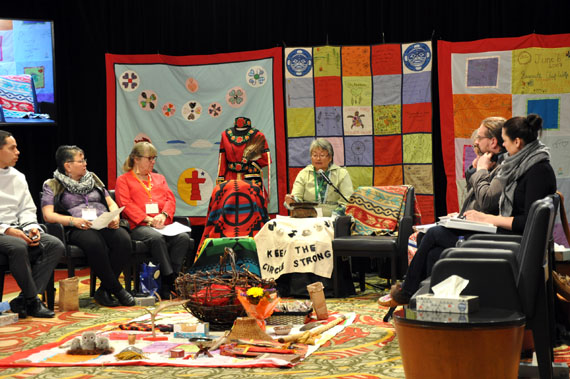 Kuujjuaq elder Martha Greig lights the qulliq March 14 at the opening of week-long hearings by the National Inquiry into Missing and Murdered Indigenous Women and Girls in Montreal March 12-16. (PHOTO BY SARAH ROGERS)

Two major themes emerged from a panel discussion in Montreal last week on violence against Inuit women: Inuit communities must stop encouraging women to stay in abusive relationships, while their abusers themselves often need to be treated for childhood abuse.

The National Inquiry into Missing and Murdered Indigenous Women and Girls hosted a week of hearings in Montreal March 12 to March 16, a day of which was dedicated to Inuit families.

A March 14 panel discussion featuring Inuit women—many of them survivors of abusive relationships—told the commission they were encouraged to stay in their violent relationship as a way to preserve their marriage or reputation.

“We’re all being told to just stay in the marriage—that everything will be OK,” Rebecca Jones told commissioners March 14.

“But patience does not work.”

Jones, originally from Coral Harbour, left an abusive husband for the last time in 2009. She now works as a violence prevention coordinator at the Ottawa Inuit Children’s Centre.

Other women on the panel relayed their own experiences; suffering long and agonizing years of abuse they believed would end at some point. When women did disclose the abuse to family or friends, they said it was downplayed or ignored.

“When you’re going through an abusive, violent relationship, there is no one to talk to,” said Lizzie Aloupa, originally from Quaqtaq. “You always feel like you’re the only one.”

“It’s best to get yourself to a safe place.”

Aloupa did not have the courage to leave her own abusive relationship until she was almost strangled to death.

Through the violence, most Inuit women recognize that their abusers have themselves been victims of abuse as children, trauma that remains untreated.

“Childhood sexual abuse is the main cause for all the violence goes on,” said Aloupa, who now works to help Nunavimmiut children disclose abuse as part of the Good Touch, Bad Touch program.

“My passion is to help people break the silence on their sexual abuse and start their healing journey.”

Testimony at the hearings that day pointed to a pressing need to identify and treat the root causes of violence against women.

“We know that the men who abuse have also been abused,” said Jeannie Nayoumealuk, executive director of Saturviit Inuit Women’s Association of Nunavik.

Nayoumealuk said she sees a potential for Saturviit and Inuit men’s groups in Nunavik, like the Qajaq Men’s Association of Inukjuak, to partner to deliver programming to men and women in Nunavik.

On March 14, the inquiry heard from Sarah Nowyakallak, whose older sister Alacie was found dead in the St. Lawrence River in Montreal in October 1994. The death was ruled accidental—though the 34-year-old woman appeared to have died violently.

Sarah Birmingham and Barbara Sevigny testified about the 1986 murder of 15-year-old Mary Ann Birmingham in Iqaluit, which remains unsolved to this day.

Nayoumealuk called the hearings an important opportunity for Inuit families to voice their loss and recommendations on how to better support communities facing violence and the ongoing impacts of colonialism.

“But one week, one day was too short,” she said. “There are so many families who want to be heard.”

While Montreal is a natural hub for Nunavimmiut, some participants who had registered to give statements to the inquiry had trouble with travel and didn’t make it to Montreal on time, she said.

The national inquiry has asked Ottawa for a two-year extension to its mandate. If that is approved, Nayoumealuk said that Saturviit will consider formally inviting the inquiry to host a hearing in Nunavik, preferably along the region’s Hudson coast, which has seen a number of violent incidents in recent years.