“Everywhere we turn, someone is trying to eradicate us” 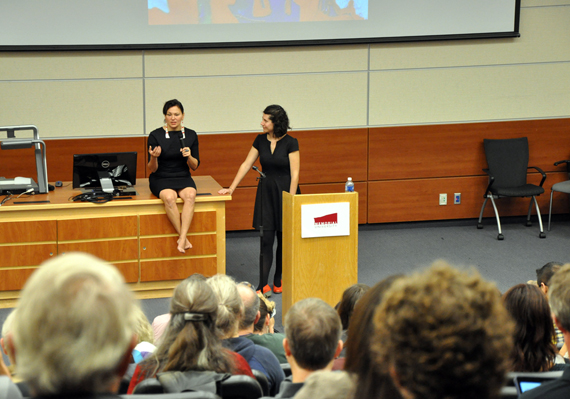 ST. JOHN’S, NL—For anyone who has seen Tanya Tagaq’s intense and guttural live performances, it’s always a surprise to hear how soft-spoken she is in her regular speech.

But her words needed no effect to resonate with a crowd who came to hear her keynote address on unity and reconciliation Oct. 9 at the Inuit Studies Conference in St. John’s.

The Cambridge Bay-raised artist has risen to fame in recent years with her unique style of throat singing and performance.

But more and more, Tagaq has made a name for herself as an outspoken Indigenous activist, calling out Canada’s colonial policies and institutional racism.

“What was done to children in residential school was so disturbing, it’s hard to talk about,” Tagaq told a packed lecture hall at Memorial University.

“Years and years of trauma and torture and then sending them home with no language and no ability to parent.”

The effects of that policy have been massive for Inuit communities—her own family included— setting off decades of trauma, violence, addictions and poverty, Tagaq said.

And even today’s governments have done little to make amends, she added.

“Everywhere we turn, someone is trying to eradicate us,” Tagaq told the audience.

“Why aren’t we moving faster to respond to this emergency? We have to take these things into our own hands and demand change.”

Tagaq called on Inuit across the country to put differences aside and build each other up as a people.

She gave an example of where that isn’t happening: Inuktut language loss, a source of shame within the Inuit community, should be an opportunity for learning and sharing but too often Tagaq says Inuit criticize one another.

“It really hurts to be told you’re not Inuk enough,” she said. “We’re sick right now and we have to get rid of it and move forward. And the only way we’re going to move forward is by loving each other.”

Tagaq spoke barefoot Oct. 9, as she often appears on stage, with her young daughter Inuuja at her side.

As she gave her address, she showed images of her childhood in Cambridge Bay, her favourite fishing spot, and other scenes from life in the Arctic, including the now infamous image of her daughter as an infant, posed next to a dead seal.

“That caused a shit-storm,” Tagaq said, recalling the fierce response from the anti-sealing movement after she posted the photo to Twitter.

Tagaq said she received hateful messages for months, including death threats and a petition to have her children taken from her.

“Before the seal ban, we were thriving, being able to provide for our families and buy hunting supplies and pay rent by doing what we’ve always done,” she said. “People have a right to feed themselves.”

“This is a great dialogue, and we have to keep it going,” commented Nunavik filmmaker Jobie Weetaluktuk.

“I’m talking to you, artists and filmmakers. If you’re starting at a deficit, arrive at a positive conclusion, because that’s where we’re going.”

While in St. John’s, Tagaq also played the city’s Arts and Cultural Centre as the closing event to this year’s Inuit Studies Conference.