Inuk artist to be featured at renowned international exhibit

Untitled (Successful walrus hunt) ink and coloured pencil, 2009 is one of 10 of Kananginak Pootoogook’s that will be featured in this year’s Venice Biennale. (IMAGE COURTESY OF DORSET FINE ARTS) 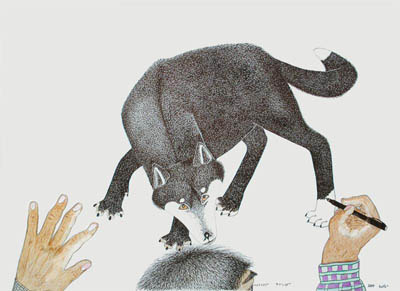 Inuit art will get a major nod on the global stage next month when the work of a late Cape Dorset artist is featured at an international exhibition.

Dorset Fine Arts and Kinngait Studios announced this week that 10 pieces by the late Kananginak Poootoogook have been selected to be shown in the Venice Biennale’s central exhibit—the first Inuk artist to be featured in this show.

This is the 57th edition of the major international art exhibition, which first launched in the Italian city in 1895.

Pootoogook, who died in 2010 at age 75, is one of 135 artists from around the world featured this year at the Venice event, and one of just three Canadians.

Sometimes called the “Audubon of the North” in reference to famed American wildlife artist, Pootoogook was best known for his bold drawings of Arctic wildlife, especially birds and caribou.

The president of the West Baffin Eskimo Co-operative, Pingwartok Ottokie, said the community of Cape Dorset “thrilled” with the news that Pootoogook’s art will be featured in such a prestigious event.

His work will help boost the international profile of other Cape Dorset artists and Inuit art across the North, Dorset Fine Arts said in an April 21 release.

The Pootoogook pieces selected for the Biennale include some of his later ink and coloured pencil on paper works which depict the material culture of Inuit, DFA said.

Pootoogook was born in a South Baffin camp in 1935, where he was raised as a hunter and trapper until his family relocated to Cape Dorset in the late 1950s. That’s where he met James Houston, with whom he helped establish the Arctic’s first printmaking studio, where he continued to produce work until his death.

Dorset Fine Arts will be in Venice for the opening of the Biennale, which runs from May 13 to Nov. 26.

The Biennale also features a pavilion for each participating country; the National Gallery of Canada chose Vancouver artist Geoffrey Farmer to represent the country in the 2017 Canadian pavilion.

The details of his installation, titled A way out of the mirror, won’t be released until just before the exhibition opens.

But Farmer visited Cape Dorset earlier this year, and it’s expected Nunavut will factor into the installation.

Nunavut has played a role in past Biennale exhibits; Canadian design teams prepared the exhibit Arctic Adaptations: Nunavut at 15, which was in display at the Biennale’s renowned architectural show in 2014.