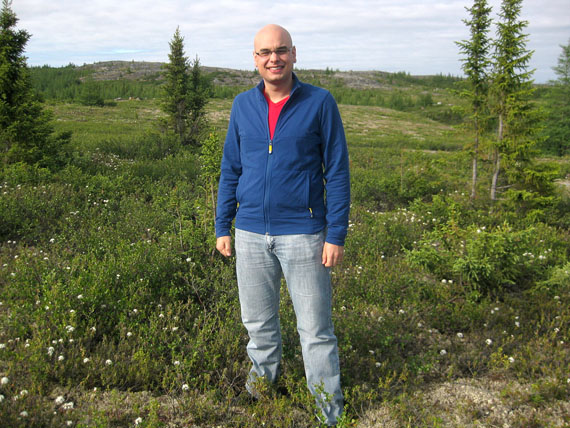 Flowers during a visit to Kuujjuaq. (PHOTO COURTESY OF JOEY FLOWERS) 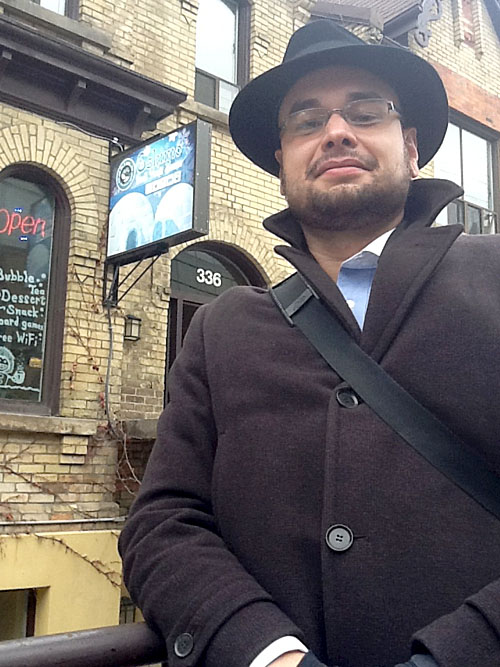 Joey Flowers is shown in a blog post on a site dedicated to challenging stereotypes about Inuit, specifically the “folks dressed up like Eskimos” line in the “Christmas Song.” So far, Inuit have been sending in photos of themselves. Flowers’ caption reads: “This is me standing in front of a shop in Toronto, wearing my CK coat, Stetson Fedora, Dolce and Gabbana glasses, Moores two-tone shirt and a Dell computer bag. My friend Joe took this picture.” (PHOTO COURTESY OF JOEY FLOWERS)

When Joey Flowers listened to the radio last year during the holiday season, he heard Justin Bieber singing the line “…and folks dressed up like Eskimos” in “The Christmas Song” or “Chestnuts Roasting on an Open Fire.”

Flowers, an Inuk man living in Ottawa who recently graduated from law school at McGill, said he thought to himself that “Eskimos, as Justin Bieber calls us, dress in many different fashions. I looked at what I was wearing that day, jeans and a t-shirt, and I wondered if that’s what Justin means when he sings the line.”

(“The Christmas Song” was written in 1944 by vocalist Mel Tormé and in 1946 became a massive hit after Nat King Cole recorded it. Since then hundreds of performers in numerous genres have recorded versions of the tune.)

His response to the incident lead to the creation of an online blog called “folks dressed up like Eskimos.”

“Everybody knows a turkey and some mistletoe helps to make the season bright, but not many people know how Eskimos dress. Eskimos (in Canada at least) generally prefer to be referred to as Inuit… Inuit have a variety of modes of dress,” the website reads.

The idea behind the blog is for Inuit to send in photos of themselves in their attire, explaining their outfits to give people an image to associate with the line in the popular Christmas song.

Now, for the second year in a row, Flowers has posted photos that other Inuit send to him describing their clothing in the photos in their own words because it’s important for people to tell their own story, he said.

“I have photos of Inuit in traditional and non-traditional clothing, in many different situations,” Flowers said.

He chose to use a blog site because it’s easy to use and can act as a public forum, though he does solicit submissions through Facebook and Twitter.

That’s so “when they hear the song, they can think ‘oh, folks dressed up like Eskimos means they look like, [whatever photos are posted],” Flowers said.

“But I also hope to point out that it’s kind of curious and silly that we cling to the tradition of using what many consider to be a racist word in our Christmas music and popular culture,” he said.

However, Flowers doesn’t want to tell people they’re wrong for liking the song.

That’s because many people hold that song in a special place in their hearts and histories, and their memories associated with Christmas, he said.

“But just because it’s not wrong, it doesn’t mean it’s right,” Flowers added.

And so far, people have responded positively to the blog.

“Inuit are sending me lots of pictures for the blog, which suggests to me that they are enjoying it. I’ve received emails from many people to say they think it’s funny. Occasionally, a person will take offence to my project. Rather than get defensive, I see it as an opportunity discuss why they take offence and to talk about the spirit behind the blog,” Flowers said.

He isn’t surprised by that reaction. Flowers says he’s achieving what he set out to do and the reactions are what he had expected and hoped for.

The collection of photos is meant to be humorous to inspire critical thinking, in a “dry, shockingly inoffensive and hopefully surprising way,” he said.

The project has been interesting for Flowers to see the “complex and diverse” photos that come in.

“I think it’s very telling that Inuit present themselves as living in many different realities. We are on the land, we are in cities, we are at the gym, we are hunters, we are university lecturers, we are jokers, we are athletes, we are prom queens, we are artists, we are motorcyclists,” he said.

“Our identity, as individuals and as a collective, is as diverse and as complex as that of any other people. I have made it very difficult to picture one type of “Eskimo” in the line “folks dressed up like Eskimos.” I hope people ask, ‘which Eskimo do you mean? There are many different ones,’” Flowers said.

To him, it remains a problem in society that it’s acceptable to use racist and derogatory names against indigenous people in North America while using derogatory names for other races and minorities is completely politically incorrect, he said.

“We have lots of sports teams like the Edmonton Eskimos, the Washington Redskins, the Cleveland Indians. Why is it that we accept that? Why is it that we can still throw around racially charged names of indigenous peoples for our team mascots, and say “’It’s just a name, get over it?’”

His overall message is that critical thinking “on race and racism can be done with a big smile and open arms.”

Flowers is still looking for submissions to his blog, though he plans to spend time with family and friends over the holidays as well as “lots of food, some turkey and some mistletoe, and perhaps I’ll frolic and play the Eskimo way,” he said.

If anyone would like to send in their photos, they can email Flowers at folksdresseduplikeeskimos@gmail.com.