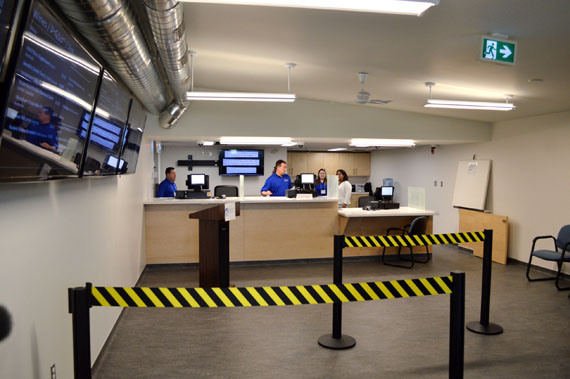 Video monitors on a wall inside the Iqaluit wine and beer store list 23 brands of beer and over 70 brands of wine. (PHOTO BY STEVE DUCHARME) 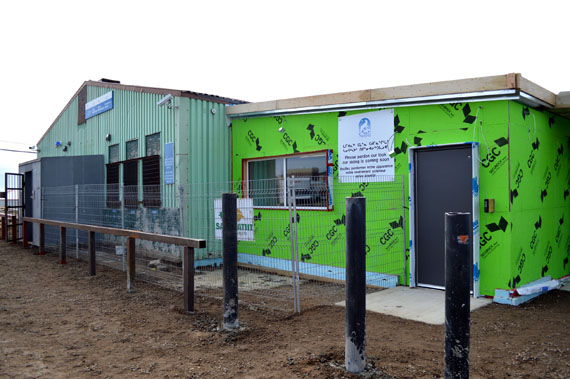 The Iqaluit wine and beer store is located in an addition to the old liquor warehouse in Lower Base. Though the interior is finished, workers have yet to install exterior cladding. (PHOTO BY STEVE DUCHARME) 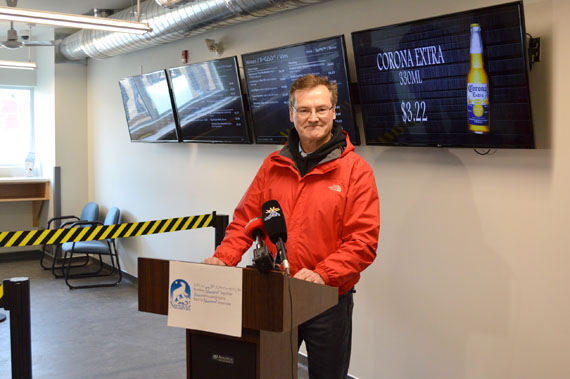 Eight years after a government-appointed task force explored liquor use in Nunavut, the unveiling Sept. 6 of the territory’s first walk-in beer and wine store signaled a new era in Iqaluit, as customers quickly filled the store to make their first over-the-counter booze purchases.

Shortly before doors opened to the public, Nunavut’s finance minister, Keith Peterson, told local media that the store marks the realization of a recommendation made by Nunavut’s liquor task force in its 2012 report, which said a beer and wine store could curb binge drinking and bootlegging.

That report was followed by a 2015 plebiscite, when Iqalungmiut voted overwhelmingly in favour of a strictly-controlled government-owned beer and wine store.

“It’s been a long journey in the making,” Peterson said, shortly before making the store’s first purchase—a 12-pack of Corona.

Nunavummiut should have a choice if they want to consume alcohol, he said, before adding “I believe prohibition has never worked anywhere. When people want alcohol, they’re going to find it.”

“We believe this is the right way to go in the evolution of our territory,” he said, adding that both Rankin Inlet and Cambridge Bay voted in favour of beer and wine stores in dual plebiscites earlier this year.

Billed as a three-year pilot project, the store accounted for “most” of the roughly $2 million allotted to Nunavut’s Liquor Commission in the territory’s 2016-17 capital budget, said the assistant deputy minister of finance, Dan Carlson.

The store was originally scheduled to open during the summer, but construction has been slow. Most obviously, the building’s siding has yet to be put in place.

The result is an exterior covered in bright green Tyvek wrap, with a large white sign at the front of the building assuring customers that the store is indeed open.

But inside it’s a different matter. Televisions lining one wall list 23 brands of beer and over 70 brands of wine, as patrons make their way through a zig-zag queue to cash registers at the back of the store.

But one thing you won’t find at the store: any wine or beer from the European Union.

That ban has since been lifted, but Carlson said it’ll be up to Nunavut’s next legislative assembly, which will be elected in October, to choose what to do.

“It’s a symbolic move and we’re still under that,” he said.

“This [fourth] assembly has chosen not to ask us to reverse it, the next [fifth] assembly might.”

Customers must first fill out an account before ordering, and store employees will relay the beer and wine from the adjacent warehouse after purchases are completed.

No physical beer or wine is on display within the store.

Approximately 800 people had pre-registered their customer accounts prior to the store’s opening, a Department of Finance spokesperson confirmed.

You do not need to be an Iqaluit resident to create an account at the store but Carlson noted it is up to the individual to respect the prohibited or restricted alcohol laws within their home communities.

While turnout at the beer and wine store’s first day of operation was strong, the store’s existence has not been without its share of critics.

Last year, Iqaluit-Sinaa MLA Paul Okalik resigned from cabinet and has continuously sparred with Peterson over creating an addictions treatment facility ahead of the store’s opening.

Those sentiments were echoed later by Baffin mayors, who released a similar statement in favour of an addictions treatment centre in Iqaluit.

After Sept. 6, Iqaluit’s beer and wine store will be open from noon to 7 p.m., Tuesday to Saturday.