“Our Arctic foods speak for themselves” 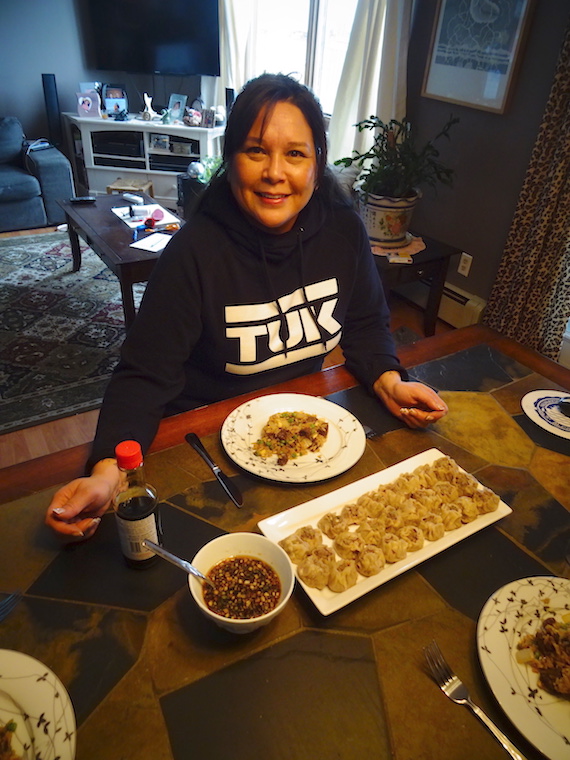 Sheila Lumsden sits at her table spread with muskox fried rice and muskox dumplings. The meal marked the first time she had ever cooked with muskox. (PHOTO BY JANE GEORGE) 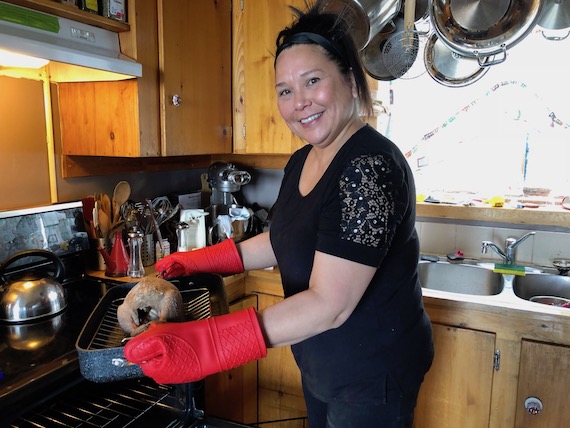 Sheila Lumsden cooks a fresh Canada goose in the kitchen of her Lower Base home in Iqaluit. Whenever possible, Lumsden tries to incorporate inuksiutiit or country foods into her menus. (PHOTO BY JANE GEORGE) 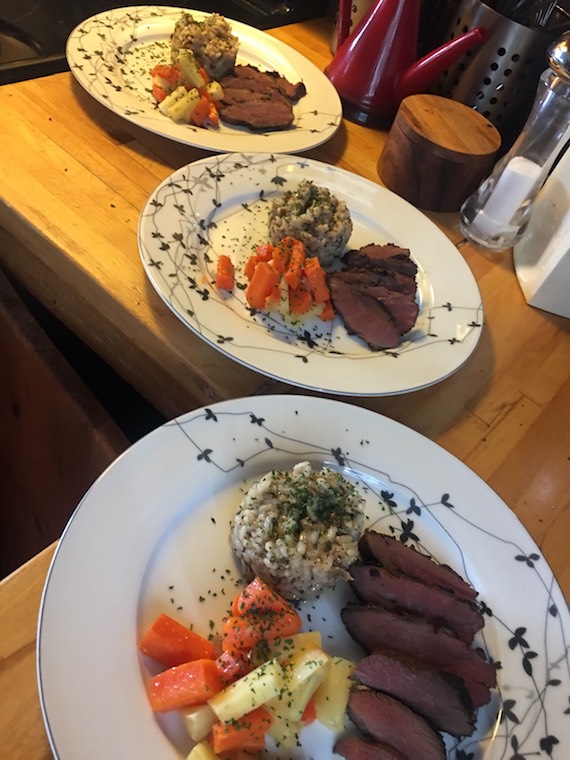 A five-pound Canada goose can easily feed four: here are three of the plates that Lumsden prepared along with vegetables and risotto. (PHOTO BY SHEILA LUMSDEN)

In Nunavut you usually keep your eyes out for signs of spring, for those long days with enough heat to warm the air, melt the snow and leave a sheen on the sea ice.

Spring also marks the return of geese and other migratory birds to the North, along with greater ease of hunting and fishing.

So, in honour of the return of spring, which was late arriving this year, Iqaluit’s Sheila Lumsden agreed to share some ways of preparing muskox, goose, seal and char.

As Iqaluit’s one-time Master Chef contestant, Lumsden is known around Iqaluit for her sushi, cinnamon rolls and maple-smoked Arctic char. These treats typically sell out in minutes on the Iqaluit Sell/Swap Facebook page.

Last summer Lumsden made 500 natsiaminiq, or baby seal, sliders for the Nunavut Arts and Crafts Association’s Nunavut Day event. The sliders disappeared almost as soon as they were laid out.

Lumsden also been known to make hors d’oeuvres for the royal family, the Commissioner of Nunavut and territorial politicians.

And if there’s an overriding approach to her cooking, you might say it’s simplicity—or as Lumsden put it: “Our Arctic foods speak for themselves.”

Now, while you can find muskox in western Nunavut, the High Arctic and even in Nunavik to the south, cooking muskox, which are not native to southern Baffin, was a challenge for Lumsden.

“It’s my first time cooking it,” she admitted, considering the frozen muskox, bought both ground and in steak form at the Nunavut Country Foods Store, located across the street from the Nunatsiaq News office in Iqaluit.

But Lumsden managed to come up with two novel, but easy, ways of preparing the muskox meat.

What Lumsden produced one evening was worthy of an Arctic-Asian fusion table: muskox fried rice and muskox-filled dumplings. “Amazing” is how a drop-in visitor to the supper described the result.

Lumsden said anyone can make the meal with what’s on hand, by substituting meat like caribou or beef for muskox and other leftover vegetables for the frozen peas she used.

In her small kitchen in her Lower Base home, Lumsden laid out the ingredients as she prepared to start cooking: beaten eggs, chopped muskox, diced onions and garlic, ginger, peas and leftover rice.

“I’m making it in my new wok,” Lumsden said, adding that any big flat-bottomed pan would do the job. She had made her own dumpling wrappers the afternoon of our supper (but you can also use store-bought wonton wrappers) and then mixed up the muskox filling.

Then Lumsden stuffed the dumplings with just enough meat so that you could easily pop them into your mouth in one bite after dipping them first in a spicy sauce.

The fried rice mix featured bits of muskox, spiced and coated with cornstarch to soften it before cooking. This turned the meat into mouth-watering morsels. After eating this dish, along with more than two dozen dumplings, no one had room for dessert, an aqpik gelato.

The next night, a totally different supper featured, as its main dish, a fresh Canada goose hunted by Lumsden’s fiancé, Johnny. The five-pounder was one of the first geese seen near Iqaluit where they arrived late this year.

But before the cooking came the plucking. Lumsden plucked this by hand, to add the soft down to her collection. She mentioned you can also freeze the birds with feathers on for future eating. Then, the removal of feathers and down is done in one “fowl” swoop, by dipping the bird quickly in hot water.

Inside the goose, Lumsden also found some unformed eggs: these she left to cook in the bird’s cavity. Also with the meat, she served mushroom risotto, and carrots and parsnips.

After the goose was cooked, Lumsden took off the breasts and seared them in a reduction of juices before presenting them, sliced, on the plate.

Lumsden confessed she likes to “plate”—that is, artfully arranging her food before serving.

She’s fortunate that Johnny is also a willing kitchen cleaner.

Of course, this is not the only way that you can prepare geese, which are often simply stewed or, as is done in the Cree territory of Quebec, slow-smoked, by being hung upside down over a fire so the goose fat falls, slowly feeding the flames.

As for Arctic char, that favourite of all spring foods, you can eat it as quaq or frozen, smoked or in sushi, which, when Lumsden makes it, doesn’t last long.

If you do have seal, Lumsden’s preferred way to enjoy it is as natsiminiq uujuq, or stew.

“Bring meat and cut-up onion to a gentle boil, add a package of tomato vegetable soup to mix in for the last 15 minutes, add whatever vegetables you like, potatoes, carrots and celery, and serve,” she said.

In the meantime, she’s happy to share her recipes on Nunatsiaq.com. Like many avid cooks, Lumsden said she’s inspired by online recipes, for which she then substitutes ingredients, according to what is available locally.

• Rinse and pat meat dry with a paper towel.

• Season meat with salt, pepper and 1 tsp. sugar, then toss with cornstarch until well-coated. Set aside.

• In a large skillet or wok over medium-high heat, add 1 tsp. vegetable oil and eggs. Scramble using a rubber spatula, then transfer to side dish.

• Turn heat on high, then add a drizzle of oil and fry meat until crispy. Cook meat in two batches, then transfer to another side dish.

• Stir in soy sauce, white vinegar, pepper, remaining 4 tsp. sugar, and sesame oil. Add meat and eggs back to the pan, then toss together and serve immediately.

Muskox dumplings: a variation of these Siu Mai dumplings:

For the filling: In a large bowl, combine the muskox, ginger, soy sauce, cornstarch, sesame oil, mushrooms and scallions. Sprinkle with salt and pepper and mix well.

• Oil the bottom of a (bamboo) steamer and/or line it with a piece of perforated parchment paper.

• Place the dumplings in the steamer, cover with a lid and place over a pan or wok of boiling water (making sure the water does not touch the bottom of the steamer.)

• Steam the dumplings until cooked, seven to eight minutes.

For the dipping sauce: combine the chili and soy sauces in a bowl. Serve with the dumplings.

• Grab the fat inside the body cavity and put it in a bowl along with the goose’s tail. All of this should go into a pot with a little water (about 1/2 cup) and put over low heat to render the fat, which you can use to make gravy.

• Prick the goose’s skin all over with a needle.

• Season the goose and place in the oven.

• Rub the goose all over with the cut half of a lemon.

• Sprinkle salt all over the goose.

• Slice off the top of a head of garlic and place it inside the goose.

• Place the goose breast side up on a rack in a roasting pan and into the oven. Prick to test if it’s done, about an hour or more for a five-pound goose.