“Every meeting that happens in the North starts with a prayer”

By THOMAS ROHNER AND SARAH ROGERS 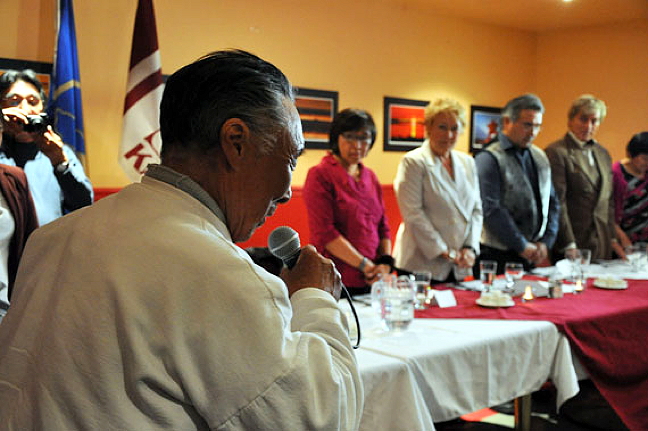 Iqaluit city councillor Kenny Bell says he plans to bring a motion to remove the opening prayer from Iqaluit City Council meetings and replace it with a moment of silence.

The motion is in response to a recent ruling from the Supreme Court of Canada which found that praying before municipal council meetings violates an individual’s freedom of religion and conscience.

Iqaluit’s council meetings — and most other public meetings in Nunavut and Nunavik — open with a prayer that is almost always Christian in nature.

“If you’re making decisions based on your faith, that’s your own personal decision,” Bell said. “But making some councillors, or staff or visitors to council’s chambers pray — that’s just not right.

“I just don’t think it belongs there at all,” he added. “I don’t believe that my faith has anything to do [with] or any place in council.”

The item will be up for discussion among council members at their next meeting, scheduled for May 12.

Bell intends to move to have prayer dropped from the council’s bylaw and replaced by a moment of silence — a time people may use to reflect on whatever they like, he said.

But the issue has stirred strong emotions among Nunavummiut, who argue saying a prayer is a long-held tradition that should be left alone.

Fellow councillor Noah Papatsie is in favour of keeping the prayer at meetings. He said it’s an important practice for groups who are working together.

“In many other meetings, they do prayer, even just community gatherings,” Papatsie said. “It’s to try and have a better understanding of what we can achieve together — we pray to have a better outcome for everyone.”

At the same time, Papatsie said he wouldn’t oppose the idea of a moment of silence.

Iqaluit’s city council is the first in the territory to acknowledge the ruling, which was prompted by a 2007 complaint from a Quebec atheist who took issue with prayers being recited at his local city council meetings in Saguenay.

The court’s April 15 decision hinges on the principle that the state should remain religiously neutral in its services to the public.

But a municipal council in Nunavik does not plan to let the decision change what it considers a “way of life.”

There was little discussion, he said: the entire council agreed they would continue to start meetings with a prayer as usual.

“It’s our way of life, our tradition and we plan to continue,” he said. “It’s not an issue in Kuujjuaq, and I don’t expect it to be one anywhere else in the North.”

Nunavik’s Kativik Regional Government, whose regional councillors open public meetings with a prayer, said May 11 that they would not comment on the Supreme Court decision.