Proposal to choose mayor in by-election dies by one vote 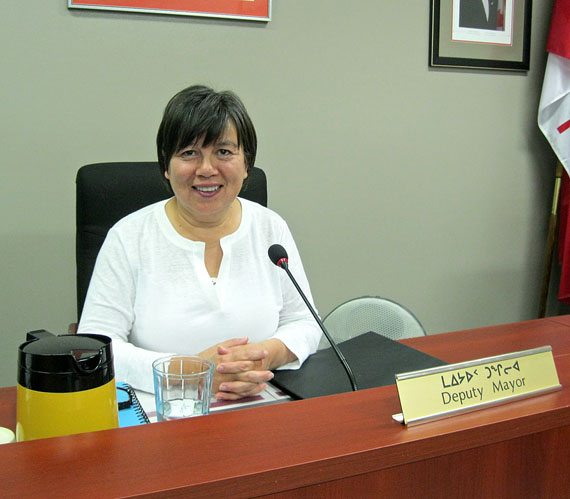 Iqaluit’s deputy mayor, Mary Wilman, has served as acting mayor since May. Since July, she has been paid the same salary as the mayor would receive, on a pro-rated basis. (PHOTO BY PETER VARGA)

Iqaluit’s acting mayor will remain in place for the time being.

Council narrowly voted down a motion Aug. 26 for a $90,000 election to choose a full-time mayor with a $109,000 starting salary to fill the position until the next municipal general election in October 2015. (See Iqaluit council indemnity bylaw amendment embedded below.)

After 2012, that $109,000 salary is supposed to increase at the same rate as salaries paid to unionized workers under their collective agreement with the city.

The motion for an election for a full-time mayor came from self-professed fiscal conservative Coun. Kenny Bell, who explained that he wants to see an elected official fill the seat, rather than an appointed one.

Deputy Mayor Mary Wilman has filled the position as “acting mayor” since the resignation of former mayor John Graham, June 24.

Following a bylaw amendment this past July, she has been paid under the same salary scale that Graham earned at the time.

Bell agreed with fellow councillors that Wilman has done a good job since assuming the role — which started when she filled in for Graham after he departed for a vacation in early May, and then on an indeterminate basis after his resignation in June.

Council has had one by-election to fill a vacant council seat during the current mandate. This came at less than half the usual $90,000 cost of an election, because the poll took place in conjunction with the territorial election last Oct. 28.

Councillors praised Wilman for doing the job in Graham’s absence, during what turned out to be a particularly demanding time.

The city’s dump fire at the city’s past-due landfill site began shortly after she took the helm during Graham’s vacation, and carried on after his subsequent resignation.

“I think Mary did a very good job, keeping both us and the public informed. Thanks a lot for taking the helm during this time,” said Coun. Joanasie Akumalik. Councillors showed their approval by thumping their desks.

“I don’t believe that, for what would amount to 11 months, the $90,000 expense is warranted,” Coun. Stephen Mansell said of the election’s cost to taxpayers. “And I would prefer the status quo, if the deputy mayor is willing to take the job for an extra year.”

City administration said an election could take place in mid-November, at the earliest, after election procedures and campaigns are completed.

Asked about her view on the matter, Wilman said she would continue to act as mayor, as long as council so wishes.

Bell said, however, that he believes voters should decide who serves as mayor.

“I’m conservative at heart, and I don’t like spending money at all,” Bell said. “But to this point Mary’s saying she would like to do it — everybody in their right mind would say that they want to get $115,000, plus living allowance.

“I won’t support an appointment. I will support an election. I think voters need to decide.”

Wilman said, however, that the money isn’t important to her.

“I just want to say, from my heart, that I don’t really appreciate [the thought] that of course I want to run, because of the money,” Wilman responded after Bell tabled the motion for a by-election.

“To me, what’s important is the job. I have always said whatever the council decides, is what’s done. Coun. Bell, it’s not because of the money. I think it’s a very dangerous thing to do, for anybody, just to run because the money is good,” Wilman continued.

“There’s a lot of responsibilities that go with this position, that’s why it’s full-time.”

Coun. Terry Dobbin and Akumalik agreed that Wilman, with her bilingualism and long experience as a councillor, was ideal for the position. But the two disagreed about an election.

“The mayor’s mandate should be decided by the voter,” Dobbin said.

Akumalik agreed, but said he was against the costs of an election – especially in view of the city’s steep cost projections on extinguishing the dump fire.

He added that Coun. Simon Nattaq, who could not attend the meeting, told him that he preferred that Wilman maintain her position as deputy mayor.

In the final vote on Bell’s proposal for a by-election for mayor, Coun. Noah Papatsie, Dobbin, and Bell voted in favour.

Akumalik, Mansell and Wilman voted against, bringing the vote to a tie.

Coun. Romeyn Stevenson held the chair during the discussion item. He cast the tie-breaking vote, and the motion was defeated 4-3.

An earlier version of this story reported that the acting mayor receives compensation of about $8,000 a year. But on July 8, Iqaluit City Council passed a bylaw amendment stating the deputy mayor, when performing the duties of mayor, shall be paid the mayor’s salary on a pro-rated basis.