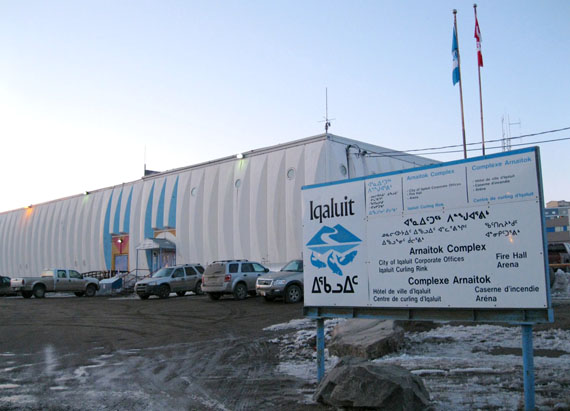 Iqaluit City Council finally agreed to a set of property tax rates for this year on April 28. Complaints from the city’s business community pushed the city to reconsider proposed mill rates this past winter. (PHOTO BY PETER VARGA)

Iqaluit City Council agreed April 28 to set this year’s property taxes in line with rates proposed by the Iqaluit Chamber of Commerce.

Council’s attempt to decrease taxes on homeowners and raise taxes on businesses backfired earlier this year, when the chamber, which represents the interests of the city’s business owners, asserted in a letter to the city that entrepreneurs “are being required to consistently carry a greater share” of the city’s financial burden — including a growing budget deficit — “each and every year.”

The ensuing uproar sent the mayor and councillors back to the drawing board, two months after they had agreed to a second draft of the 2015 budget.

In the end, the mill rates councillors agreed to on April 28 looked a lot more like the rates that they first created with city administrators during budget deliberations last December.

The rates, by type of property, are:

The 2015 mill rates amount to tax increases ranging from about 20 per cent on houses, to more than 25 per cent on institutional and industrial properties.

Council voted in favour of the rates, five votes to one.

“No councillor here wants to raise taxes by 20 per cent,” said Coun. Stephen Mansell. “It’s not what we wanted to do.”

But “I feel very strongly that the major projects that are going forward this year are things that can’t wait,” he said.

“I still believe we can do better,” said Coun. Kenny Bell, who cast the only vote against the amended rates. “I know we’re in difficult financial situations, but we don’t even know how bad it is yet.

“We still haven’t updated our audit from last year. We don’t even know the actual numbers of how far we are in debt,” Bell said

The Iqaluit Chamber of Commerce alleged the city has accumulated a deficit of more than $10 million over the past three years. City administrators have neither confirmed nor denied the chamber’s estimate.

“Is there any plan in place to mitigate or eliminate our deficit besides raising taxes every year?” Coun. Terry Dobbin asked city administrators at the meeting.

“It must be really frustrating for the business community each year, having to deal with a different mill rate,” Dobbin said. He suggested the city should map out long-term solutions.

The city’s chief administrative officer, Muhamud Hassan, confirmed city directors are drafting a plan to deal with the deficit.

He said he hopes to create “a short and long-term deficit plan” that will stabilize the city’s finances.

The city’s budgetary expenditures are expected to top $19 million this year, according to documents presented to city council at the meeting. Revenues from taxes and grants are projected at about $17.5 million.

“To the citizens that are going to be affected by (tax increases), I hope this is a one-time substantial increase, and that we can get our books in order in the long term, and that there won’t be a shock like this ever again,” Mansell said.

Mansell stepped up from his role as co-chair of council’s finance committee of the whole, March 21, to take Bell’s place as chair temporarily, after Bell resigned.

Mansell went back to his role as co-chair, April 28, after Bell nominated Coun. Noah Papatsie as chair.