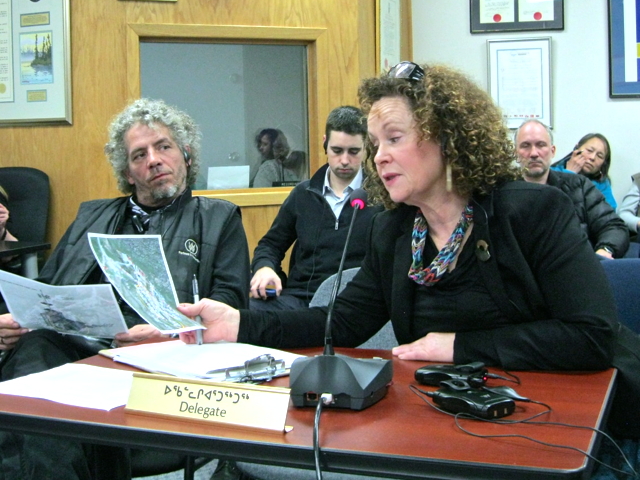 Iqaluit city council promised to help clear the way for a film crew to transform a section of Apex into a camera-friendly zone, with customized night-time lighting fit to shoot for the silver screen.

In a motion passed March 24, councillors agreed unanimously to ask the Qulliq Energy Corp. to keep 18 streetlights off for four nights in an area covering almost half of Apex, for the period April 16 to April 23.

This will allow the producers of Two Lovers and a Bear to use their own lighting design to illuminate the area for all night time shooting.

The costs of the request will be passed on to the production company, lead by the multiple Academy Award-nominated producer Roger Frappier.

Hamilton, who is managing all Iqaluit-based cast members and crew on the project, told councillors that the film project presents a rare chance for Iqaluit’s creative community to work with “some of the best filmmakers in the world.”

It was Frappier who drew director Kim Nguyen, also an Academy Award nominee, to the project.

“We’re hoping to bring in Inuit and Nunavummiut who will train under them in all aspects, both behind and in front of the camera,” Hamilton said.

Frappier, who is based in Montreal, is known for producing films with broad appeal that span both English- and French-speaking audiences in Canada as well as audiences in the U.S. and Europe.

Two Lovers and a Bear is geared toward the same broad viewership and promises to help promote Nunavut among audiences and film producers alike, Hamilton told council.

“There’s a very good chance that there will be a strong influx of tourism as a result of this film,” she said. “And also, there are many more feature films this may attract other filmmakers to make as well.”

“We should support these types of projects, because we have a neat place to film,” Coun. Stephen Mansell agreed.

The film crew’s plans to control lighting in Apex in the last few days of the shoot drew little concern from residents at a public consultation meeting in the community, March 17.

Only three residents showed up at the meeting, “but they all left reassured,” Coun. Kenny Bell said.

Producers determined that streetlights would not allow them to shoot night scenes, and proposed to turn them off in favour of camera-friendly white lights, which Hamilton said are “equivalent to moonlight but much brighter.”

A light tower instead of streetlights will illuminate the western half of Apex, covering buildings 3000 to 3071 on the nights of April 17, and April 20 to 23, Hamilton told council.

Councillors asked how noisy the production would be. Hamilton and Choquette replied that filming of the scenes already called for tight controls on noise levels. With that in mind, crews will use exceptionally quiet power generators, Choquette said.

Coun. Joanasie Akumalik noted that crews will be making use of a lot of production equipment, and asked what they will do with surpluses. Choquette replied that such items will be sold off at a discount.

“People who supported us and did business with us will have first choice, and then we’re going to open it for the public,” he said.

“There’s definitely going to be lots of equipment — skidoos and things like that.”

Hamilton was quick to add that the sales will include clothing, much of it created by Inuit seamstresses.

“The stars are all wearing sealskin,” she said, which producers had not planned for initially, given opposition to the trade in the U.S. and Europe.

“We convinced them to do so.”

Film crews have shot scenes for Two Lovers and a Bear in Timmins, Ont., so far. They will come to Iqaluit March 29, and start work in the city on the 31st, Hamilton said. Shooting will move to Apex on April 14, and wrap up after the 23rd.

Hamilton has helped cast some 40 Nunavummiut for small-scale acting roles in the film, and more than 100 extras. About 10 residents took on positions with the production crew.