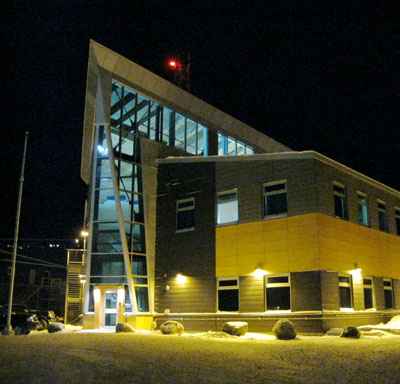 Iqaluit’s RCMP detachment started a vehicle stop program in late September that will continue into 2014. City councillors questioned the detachment’s practice of calling municipal enforcement officers to the scene of traffic violations to issue tickets instead of issuing tickets themselves. (PHOTO BY PETER VARGA)

Iqaluit city councillors, at a meeting Dec. 10, questioned some aspects of an RCMP vehicle checking program the local detachment started in September.

Staff Sgt. Monty Lecomte told council that the detachment started stopping and checking vehicles late that month — to look for traffic violations and to find drivers with out-of-date paper work and licence plates — as a “proactive” measure “to make the roads safe.”

“It’s still ongoing,” Lecomte said, adding that the program will continue into 2014.

The sergeant said patrollers have found a surprising number of vehicles “with drivers whose licenses have expired, or their plates have expired on their cars.”

Police do not know why that is.

“It’s quite a staggering number actually,” Lecompte laughed. “Is it that the notices aren’t getting mailed out like they are in the provinces? I don’t know and I certainly can’t comment on it.”

Increased checks are helping to diminish on the problem, which will benefit in the long run, he said.

Patrollers made 126 vehicle stops in October, the first full month of the program. Lecomte promised that the figure for November, yet to be reported to council, will be higher.

“And the number will rise even more in the month of December, because of the season, and lots of parties. We want to be sure everyone gets home safe,” he said.

Some councillors lauded the RCMP for this work, but many questioned the detachment’s new practice of calling on municipal enforcement to issue tickets when infractions occur.

“I was a little bit dismayed when I saw that,” said Coun. Kenny Bell. “If I got pulled over by anybody, fine. But to have to wait for that member to give you the riot act, and have to wait for municipal enforcement to show up and issue a ticket?”

Lecomte replied that ticketing calls for court appearances. This often occurs on officers’ days off, which means having to pay staff overtime to report to work and appear in court.

Some members are writing a few of the tickets, and police may eventually write more, he said — adding that the new practice is partly “a learning process.”

Asked if tickets issued by a municipal enforcement officer, who did not witness the infraction, would hold up in court, Lecomte said “I honestly don’t have an answer to that.”

“That may be something we’re erring on, and it’s certainly going to have to be ironed out, if that’s the case,” he said.

Coun. Morrissey chimed in to say he thought the stops were an “excellent to see,” and said sworn statements between police and municipal enforcement could work around the problem.

RCMP “are supposed to be dealing with criminal offenses,” Wilman said. “I know the RCMP have a lot [more serious offenses] to deal with.”

“When we have a violation, the one who is there should issue that ticket,” Nattaq said. “You shouldn’t be passing the buck if the RCMP stops the person who does the infraction.”

Nattaq added that he hoped stops would not include hunters travelling by snowmobile without helmets, as they exit or re-enter the city.

“I would like you to know they are not trying to violate traffic laws if they travel without helmets in town,” he told mayor John Graham. “When hunters go out onto the land, they don’t use helmets.”

Asked about general enforcement in the city during the Christmas holidays, Lecomte assured councillors that RCMP will be fully staffed, and working regular shifts.

“We will have several evenings and afternoons of roadblocks planned,” he added.

“The traffic enforcement is certainly going to continue. Other than that, we just want to make sure everybody gets home safe. That’s the bottom line.”