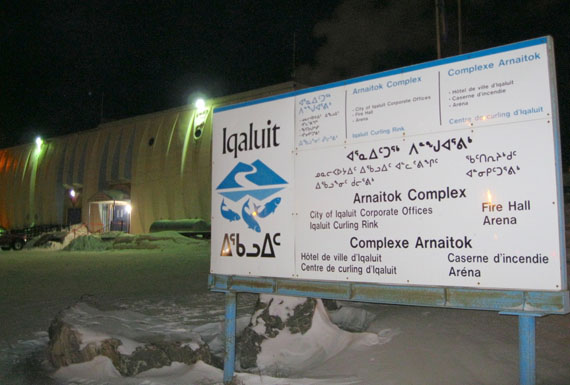 Iqaluit city councillors surprised even themselves when they failed to pass their proposed 2014 budget on Feb. 25, after more than 30 hours of discussion and review. The city will continue to operate on an “interim budget” based on figures from 2013, until council settles on a new one for 2014 by mid-March. (PHOTO BY PETER VARGA)

Coun. Romeyn Stevenson, who led budget deliberations Jan. 9 to Feb. 4 as chair of the city’s finance committee of the whole, resigned as committee chair Feb. 25 after Iqaluit city councillors surprised even themselves when they rejected the latest version of their 2014 budget, saying they want reserve funds used to reduce a proposed mill rate increase.

Iqaluit city councillors had spent two weeks reviewing a final draft of Iqaluit’s budget for 2014, complete with the cuts they demanded in more than 30 hours of meetings.

Councillors deliberated for 30-odd hours, on six separate days, to bring the city’s proposed property tax increase of $3 per $1,000 valuation down to $1.5 mill.

But when it came time to vote on it, three councillors would not budge from their opposition to the draft — and the budget failed to pass, three votes to two.

That’s when Coun. Romeyn Stevenson quit as head of the finance committee.

“I officially resign from my position as chair of the finance committee,” Stevenson said right after the vote.

After a brief moment of silence, Coun. Kenny Bell, who had voted in opposition with Coun. Terry Dobbin and Coun. Noah Papatsie, moved to refer the proposed budget back to the finance committee of the whole “as soon as possible.” Dobbin seconded the motion.

Stevenson voted against it. Three other councillors voted for the motion, as did Mayor John Graham, who participated in the meeting from outside Iqaluit via teleconference.

As chair of the meeting, deputy mayor Mary Wilman did not vote. Coun. Joanasie Akumalik and Coun. Simon Nattaq did not attend.

The result appeared to surprise councillors, who had set Feb. 25 as the target date to pass the budget and formally submit it to the Government of Nunavut that week.

After a five-minute pause, Wilman returned to inform council that the city needed to request from the Government of Nunavut an extension to the budget submission deadline to March 14.

The city would have to operate on an “interim budget” amounting to one-fourth of the 2013 budget until then, she said. Council quickly passed these as a single motion.

Councillors appeared to be baffled by the budget’s failure, starting with Stevenson.

All members of council had deliberated in six finance committee meetings to formulate the final draft, and recommended that the document be passed, Stevenson said.

But when it came time to pass it in a regular council meeting, “for some reason, councillors don’t feel it should be passed anymore,” he said.

“I can’t speak for those councillors who voted against it today,” Stevenson said after the meeting. “I don’t understand why they would change their minds unless they have a lack of understanding of what they were doing for 30 hours of meetings.”

Bell, however, never showed any sign of changing his opposition to city administration’s proposal to increase the city’s reserve funds. The draft budget proposes to increase the funds by $3 million, he claimed, which would bring them to “a total of $12.5 million.”

Bell repeated that this was his reason for opposing the document.

Council proved to be divided on the issue throughout the budget meetings. Stevenson consistently supported the need for putting more money into reserves.

City administrators also pointed to them as a source of funds needed to pay for large capital projects, to keep the city from having to borrow money at interest.

“I can imagine that maybe having that extra money would earn us a better credit rating,” Bell commented. “If they came out and said that, maybe some of us would understand it a little more.”

Bell said in previous meetings that he preferred to cut down on reserves instead of having to cut expenses from each department.

Dobbin seized on the reserve funds as his reason for opposing the proposed budget.

“I say, let’s take some dollars away from the reserve fund, apply it to the mill rate, and let’s give the citizens of Iqaluit a tax break for the year 2014,” he told council.

Like Bell, Dobbin pointed to the city’s new aquatic centre, currently in the planning stages, as a major project that has benefited from the use of reserve funds.

Papatsie had different reasons for opposing the budget. In past meetings, he said he opposed — in principal — any increases in taxes and overall expenses to Iqalummiut.

On Feb. 25, he added that he would not vote in favour if all councillors were not in attendance.

“I want the whole board to be with us,” Papatsie said.

“Why couldn’t we have all the councillors here tonight? Where’s Joanasie and Simon? I’m pretty sure they would have 10 minutes on the phone tonight,” he said.

Stevenson’s resignation from his position as chair of council’s finance committee of the whole leaves Bell, who happens to be vice-chair, with the chairmanship at least temporarily.

Bell denied that he wants to be chairman, which would require he head up the next committee meeting — and the next round of discussions on the city’s budget.

“I was dismayed that he (Stevenson) resigned,” Bell said. “I was shocked and I don’t know what to say about it.”