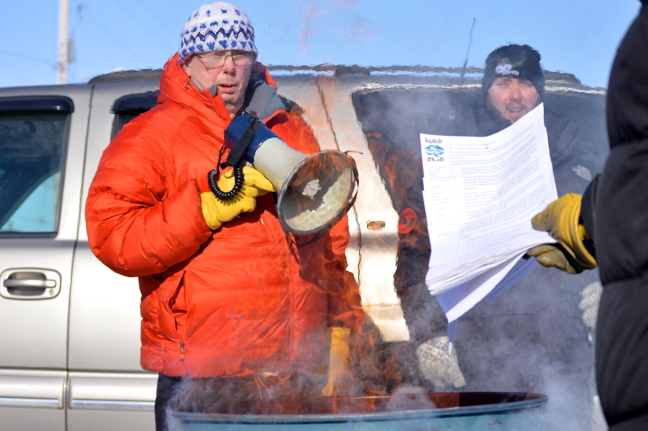 Bill Fennell, president of the Nunavut Employees Union, at a March 30 rally in front of city hall where city workers burned a letter from their bosses freezing wages and benefits. Fennell said April 26 that beefing up benefits for the mayor during a time of cutbacks and contract talks is a bad idea and he thanked councillors for voting it down. (FILE PHOTO)

Those were a few of the words tossed out at Iqaluit city council April 26 as councillors deferred on a bylaw granting Mayor Madeleine Redfern vacation travel assistance benefits.

Dubbed the “Council Indemnities Bylaw Amendment,” deputy mayor Romeyn Stevenson said the motion corrects errors made when council first agreed to pay its mayor as a full time employee in 2012.

Stevenson is filling in for the mayor as she is on vacation.

“It was decided that [the mayoral] financial structure would follow that of a director of Iqaluit. In practice, when the bylaw was written, it didn’t follow [that],” Stevenson said.

The city is also in the midst of allegedly contentious negotiations on a new collective bargaining agreement with the Nunavut Employees Union.

“I’m in favour of the mayor being paid every two weeks, but I’m against the subsection [granting the two VTAs],” said Coun. Jason Rochon.

“We’ve been told we’re running deficits, we’ve been told we’re in debt… we’re increasing user fees across the board, we’ve put huge stresses on residents and local businesses because of this. It’s very disrespectful and poor timing, and the way the bylaw was so poorly written, it’s just highly insulting.”

The bylaw barely even made it through first reading; Stevenson had to break a tie among councillors to proceed to second reading and open debate.

“The timing couldn’t be worse in regards to this bylaw. Two VTAs, I thought you had to be with the city for five years in order to get [them]. I know she was a previous mayor, but that was previous, and she’s starting from scratch again,” Coun. Terry Dobbin said.

“Two VTAs, a six figure salary [which is] tax exempt. There is no way I will support this.”

Coun. Gideonie Joamie added that the bylaw is counter to the demands laid down by city administration as it renegotiates its collective bargaining agreement with the city’s union.

“Our administration has laid down its demands, this is counter to that demand. Can we tie it in to future CBAs?” Joamie asked.

Council agreed to send the bylaw back to city staff to separate the bi-weekly pay schedule from the included VTAs.

Nunavut Employees Union President Bill Fennell, who attended the meeting, is applauding the councillors who opposed the bylaw.

“The mayor was in the news spouting how everybody was having to toe the line and the unionized members should just bend over and accept what the administration is saying… its hypocritical,” he told Nunatsiaq News.

“[Administration] presented a package of major concessions and then they turn around and say the mayor, who by all reports is rarely here, should get two VTAs, while people who have worked here for five years or longer and earned their second VTA, should lose it.”

Fennell says union and city representatives will meet again next week to discuss a new collective agreement for city employees.

But he added that in previous meetings, the city rarely came to the bargaining table.

“We spent eight days in bargaining and the city came to those meetings for a total of two hours and five minutes,” Fennell said.

“We’re hoping that they’re going to come and at least negotiate.”

The last three-year wage-benefit deal between the city and the NEU expired this past December.

Iqaluit City Council’s next regular meeting is scheduled for May 10.