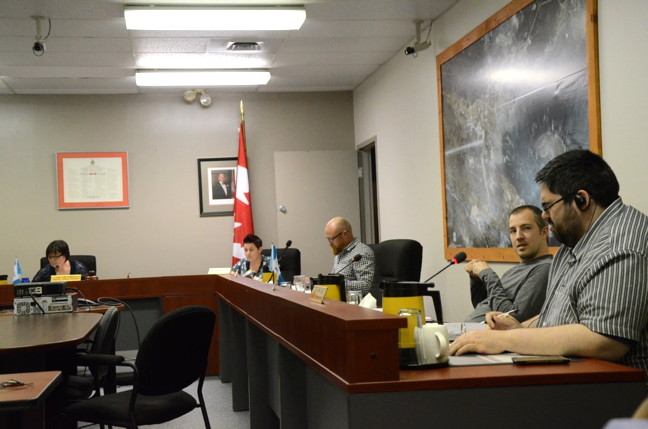 Iqaluit councillors Stephen Mansell, far right, and Kenny Bell, next to him, weren’t the only two to get into a war of words June 23 over a new bylaw that would govern councillors’ conduct. Mayor Mary Wilman, left, eventually joined the fray. (PHOTO BY DAVID MURPHY) 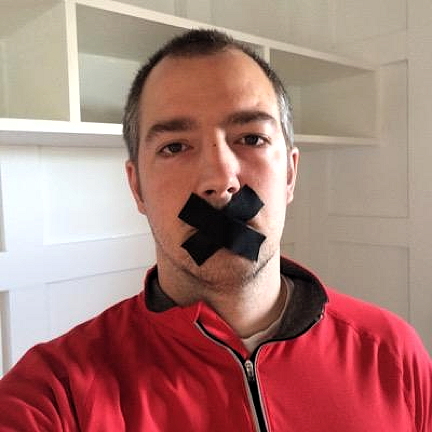 Iqaluit city council dissolved into an angry sandbox June 23 as councillors hurled insults and accusations at one another during debate over a proposed councillors’ code of conduct bylaw introduced during a council meeting.

The proposed code of conduct is essentially a rulebook governing how councillors act — both inside and outside council, toward the public and toward each other.

“As you can imagine I’ve got a million issues with this,” Bell told fellow councillors.

A few examples of “principles” councillors must abide by, according to the new code of conduct, include:

• respecting each other’s right to hold different views and debate strongly on matters of difference while being united in representing council decisions;

• respecting the right of each councillor to speak and represent their views on the needs of citizens;

• always speaking well of each other and council in public;

• always being punctual to council meetings and civic events; and,

• always behaving with the appropriate level of decorum at council meetings and in public.

But few were respecting those principles Tuesday night.

Tensions rose after Bell stated he was “absolutely not” in favour of supporting the first reading of the by-law.

Bell said he was irked by a statement in the bylaw that says the mayor has final authority “to recommend any of the sanctions above or other remedial action at his or her discretion.”

He said the provision is problematic if there are questions about the mayor’s behaviour.

Then he spoke directly to Wilman.

“You’ve accused me, more than once, but once in writing, of breaking policies and procedures that didn’t exist, for talking with the media,” Bell said.

“So I have a problem with that specifically.”

Bell suggested some other formula of discipline, perhaps involving other councillors, “so everyone has a fair shake. Because I clearly wouldn’t get one from you.”

“So knowing that [the by-law] is going to be passed, I’d appreciate you amend that so it’s a fair shake for everyone,” Bell said.

Bell, with his microphone off, retorted, “No, it’s about me.”

“Maybe you should have been here to attend that workshop so you could ask those questions at the time,” Wilman said.

“I just want to make it clear — it’s a mayor. It has nothing to do with me,” Wilman repeated.

Mansell, who sits one seat away from Bell on council, was next to enter the fray, and he didn’t pull any punches. Things went downhill from there.

“In the last year I’ve been taken aback by some of the unprofessional behaviour, and particularly just the way that, particularly councillor Bell, feels is appropriate to speak to people,” Mansell said.

“I think this gives the next council the ability to address situations when they come up, so they don’t become as heated and difficult as some of the issues that we’ve seen at council,” Mansell said.

Bell leaned back in his leather chair, looking directly at Mansell. He wasn’t about to let that one go.

“It makes me laugh that councillor Mansell would say stuff like that when he shows up late multiple times — he’s been better lately so I’ll give him credit where it’s due,” Bell quipped.

“But he yelled at me —” Bell started, before Wilman cut him off.

“Councillor Bell, this is about code of conduct. This has nothing to do with —”

“Showing up late is against the code of conduct. It’s in here,” Bell said, cutting Wilman off and pointing to the booklet.

“On top of it, he’s yelled at me in public meetings. Telling me that I’m a ridiculous human being. Did you turn off my mic?” Bell asked Wilman mid-rant.

“I am turning off your mic,” Wilman replied.

“Then call a point of order, don’t just turn off my mic,” Bell said.

“I don’t appreciate your tone,” Wilman said. “If you could say what you need to say with respect, please … please do so.”

“I would like to know why you didn’t do the exact same thing to councillor Mansell,” Bell asked.

But she ignored him.

“Is there any more questions?” Wilman asked the room.

“Absolutely not in favour,” Bell repeated again when it was his turn to vote.

Later in the meeting, during a break, Bell and Mansell continued to chirp at each other.

“I really don’t care what you think,” Bell told Mansell.

“That’s okay, I don’t care what you think either,” Mansell replied with a laugh.