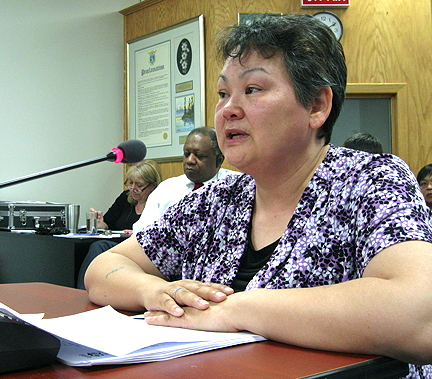 Jeannie Arreak-Kullualik tells councillors May 12 that she opposed a motion to eliminate the opening prayer from council meetings. (PHOTO BY PETER VARGA) 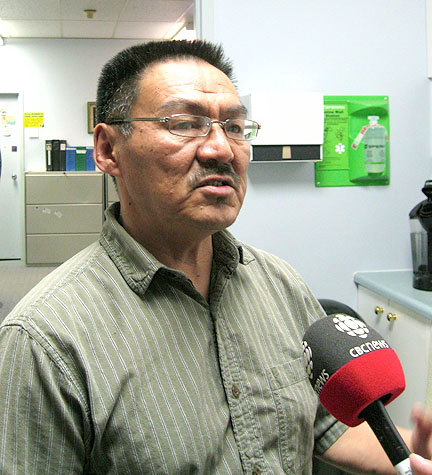 Iqaluit city councillor Joanasie Akumalik insisted, May 12, that the city needs a legal opinion on whether a Supreme Court of Canada ruling obligates the city to drop the opening prayer from council meetings. (PHOTO BY PETER VARGA)

A motion to replace a “prayer” with a moment of silence at the start of Iqaluit city council meetings died after lengthy discussion and debate in a regular meeting, May 12.

Doubts about how an April 15 Supreme Court of Canada ruling might affect Iqaluit if the city continued its procedure of saying a prayer at the start of its meetings ultimately put an end to all comment.

“I think the first question is, what does the Supreme Court of Canada do to us?” Coun. Joanasie Akumalik asked midway though a discussion.

His obvious question interrupted a heated debate: does elimination of the opening prayer threaten Inuit culture — or does the prayer exclude Iqaluit residents who are not Christian?

“If we keep the prayer in, are they [Supreme Court authorities] going to find us?” Akumalik asked fellow councillors.

“Are they going to put the councillors at BCC?” he said, referring to the Baffin Correctional Centre, Nunavut’s Iqaluit-based jail.

“I just don’t know what the Supreme Court would do to us,” he said to laughs in the council chamber, which momentarily lightened what had been heavy discussion.

The Supreme Court ruled April 15 that the Quebec town of Saguenay’s practice of opening council meetings with a Catholic prayer violates an individual’s freedom of conscience and religion.

As a result, some municipalities across Canada started to review their tradition of reciting prayers before council meetings.

A succession of major cities have since dropped the prayer including Ottawa, Niagara Falls, Fredericton, Calgary, and Edmonton.

The City of Iqaluit’s Council Procedures Bylaw actually states that each meeting must start with a “prayer,” without specifying what kind of prayer it must be.

Coun. Kenny Bell tabled a motion to drop the prayer from council meetings on May 12. His motion, seconded by Coun. Romeyn Stevenson, called for council to remove the word “prayer” from the procedures bylaw, and replace it with “a moment of silence.”

The motion died, three votes to two, with one abstention from Coun. Akumalik.

Councillors Simon Nattaq, Noah Papatsie and Stephen Mansell voted against the motion’s supporters, Bell and Stevenson. The only councillor not in attendance, Terry Dobbin, was out of the country on vacation.

“I’m going to have to abstain, because I’d like to hear some legal advice,” Akumalik said.

Bell then promptly tabled a motion “that we seek a legal opinion, to ensure that this is handled properly,” he said. Stevenson seconded the motion.

Mayor Mary Wilman noted that the city’s legal counsel is scheduled to meet with city officials on June 18.

“We can ask them to provide us with a legal opinion then,” she said.

Bell told news media after the April 28 council meeting that he would table a motion to drop the prayer. The councillor did not rise from his chair, April 28, when Akumalik delivered the prayer in Inuktitut. Nattaq normally leads the prayer, but did not attend the meeting.

Bell’s promise to table the motion at the next council meeting — and Stevenson’s promise to second the proposal — drew concern from Simon Nattaq, who threatened to resign if the motion passed.

The motion also compelled lifelong Iqaluit resident Jeannie Arreak-Kullualik to formally address council and voice her support for opening prayers at the start of the May 12 meeting.

She claimed “not all, but the majority of Inuit feel the way I do.”

“Inuit are largely silent, including me, on politics because we put a lot of trust and respect to our elected leaders,” Arreak-Kullualik told council from the delegate’s chair.

“But on this topic is where I draw the line, because it challenges every part of my being, my upbringing,” she said tearfully.

“You may see it as a religious practice, but it’s the philosophy and technical teachings behind the prayer that is of utmost importance to the Inuit and our cultural identity,” she said.

Arreak-Kullualik said praying “is a form of ancient ritual” among Inuit “to recognize, show appreciation for surviving the reality of living in a harsh environment.”

Prayer “centres ourselves as we face challenges and obstacles that we face when we have to make important decisions,” she said. “If we do not, we easily go off balance, become selfish and make the wrong decisions.

“There is Inuit wisdom in this practice, whether you are religious or not. It also brings comfort in unity, to know we are not alone, and together we can handle the most difficult things in life, and achieve more,” she said.

Inuit adopted the custom from Christian missionaries, “but the philosophy behind it [is what] Inuit are very attached to. That is why Inuit feel the prayer is our own.”

“It is one of the only fundamental practices we have not lost,” Arreak-Kullualik told council.

Coun. Stevenson admitted many residents openly oppose his stance to replace the council prayer for a moment of silence.

“Over the past two weeks I’ve been yelled at, belittled – I’ve had what I would call racist remarks directed at me, just because of this issue,” he said.

Nevertheless, he said, bylaws state that meetings must start with a Christian prayer, “and that makes our meetings biased.”

“In this city, we have Christians of all shades and all colours. We have Muslims, we have Buddhists, and atheists. We represent them all,” Stevenson said.

“How can you say to any of these groups that we’re going to make decisions that are fair, and without prejudice, but just wait outside, please, until we’re done with our prayers.

“We can’t do that. We represent all Iqalungmiut.”

Arreak-Kullualik replied that she “never meant” her own comments to be taken as racist. She said it was important for her to state her views, which council might not otherwise hear from “the ones that are silent on the issue.”

“I had to come here,” she said. “Maybe I misunderstood the intent of your motion through the media.”

Coun. Stevenson said he didn’t want the prayer issue to be raised by way of debate in council.

Coun. Mansell agreed, adding, “we should have done our policy research and our legal research before having this debate in the chamber.”