Iqaluit crowd scoffs at storm for a night of laughter 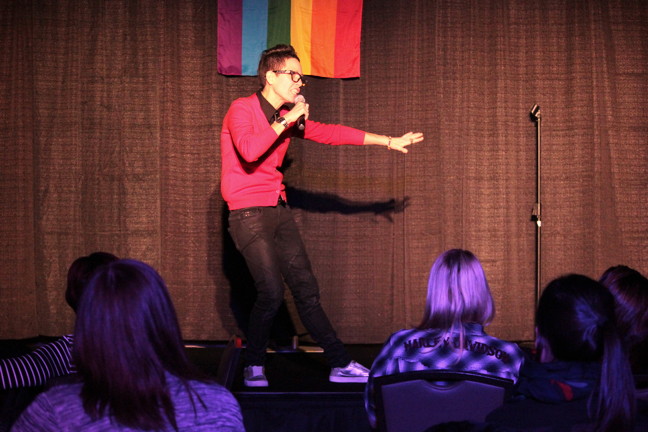 Elvira Kurt performs to an appreciative audience at Iqaluit’s Frobisher Inn Feb. 27. While in town the previous day, Kurt, the Toronto based comedian, said she got to try country foods including muskox, dried char and maktaaq. (PHOTOS BY LISA GREGOIRE) 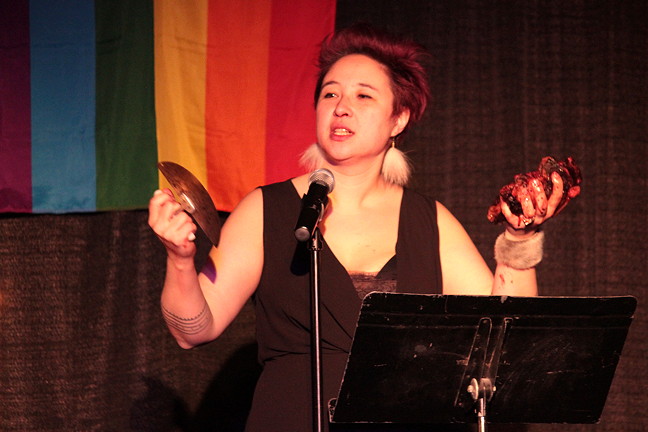 Laakkuluk Williamson Bathory, acting as the Minister of Enlightened Nourishment, holds up an ulu and a handful of raw meat at the end of her performance. 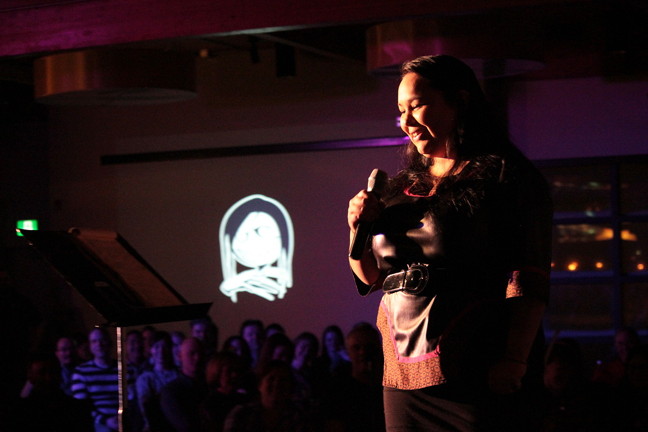 You can’t have a Nunavut comedy show without raw meat.

Well, you could, but it wouldn’t be as interesting.

And though hotel management cancelled the cash bar on account of the blizzard-like weather that night, it was definitely not a family show.

Headlining the night was Toronto’s Elvira Kurt, Second City veteran and comic legend of television, radio and the stand-up stage. She gave a rare marathon hour-and-a-half show simply because she was having so much fun.

“I’m having such a good time up here, I’m just going to keep going until the blizzard stops,” she said, peering outside. “It’s like scuba diving in snow out there.”

But before Kurt even hit the stage, audience members — upwards of 200 in the Frobisher Inn’s Koojesse Room — had sore cheeks already from laughing with the show’s three stellar opening performers: Laakkuluk Williamson Bathory, Bibi Bilodottir and Nicole Etitiq.

Williamson Bathory, who introduced herself as the Minister of Enlightened Nourishment from Hans Island, served up an English-Inuktitut spoof of how Northerners and Southerners differ in how they think about, and consume, food: meat mostly.

“I’ve often wondered if it’s fun to be an animal rights activist,” she said. “Is that why they do it?”

Williamson Bathory ended the show holding up a handful of raw meat and an ulu.

The tank-topped and tattooed Bilodottir, a self-described “Icelandic fairy,” offered a hilarious take on growing up gay in Toronto — faking a British accent to endear herself to her peers — and the soap opera of relationships in Iqaluit.

Four back-up dancers joined Bilodottir for her final bit: a riotous song-and-dance with gay lyrical substitutions to pop and R & B hits.

Etitiq, the youngest of the openers but no stranger to the stand-up stage, kept the laughter rolling with self-deprecating stories of growing up in Iqaluit, learning to swear out of dad’s earshot and the indignities of trying to find, and keep, a mate.

After the break, emcee Franco Buscemi introduced Kurt, who hit the stage like a compact freight train, jokes flying off her like sparks, most of them, it seems, gathered from the preceding 24 hours during which Kurt had been in Iqaluit.

Undeniably delighted to be in Nunavut, she poked fun, and marvelled at, northern life, but mostly told stories about her southern fish-out-of-water self.

“People are really kind here, just doing slow eye rolls so I don’t notice,” she said, describing all her stupid questions, like why are all the buildings on stilts?

“It’s doing wonders for me because I don’t really don’t like people,” she said later in her routine. “Even the people who are rude and dismissive do it lovingly.”

Kurt said after the show that she enjoyed borrowing a sealskin jacket and trying an array of country foods, courtesy of her local hosts.

“I really wanted to know what this part of the country is like. I wanted to be in it and I want to meet all the people who actually choose to live here, and all the complexity of it, ” she told Nunatsiaq News after the show.

“I expected the people were going to be friendly but I didn’t anticipate how welcoming people would be.”

Kurt said she hopes to to come back and bring her two kids next time, both of which seemed to know more about Nunavut than she did, she said.

“My kids are 10 and six and I asked them what they thought I was going to see and my daughter said an inuksuk and my son said you’re probably going to see some seals. I didn’t see any, but I wore a sealskin jacket,” she said.

When asked if she was surprised that Iqaluit had such a vibrant and active gay and lesbian community, Kurt smiled and raised an eyebrow.

“Oh no, we’re everywhere. The cold can’t keep us away,” she said. “I’m surprised I didn’t run into any exes.” 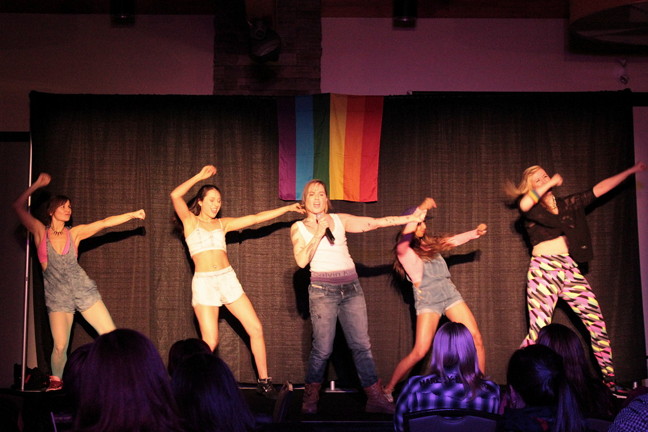 Bibi Bilodottir got a little help from some groovy friends for a song-and-dance routine at the end of her performance.