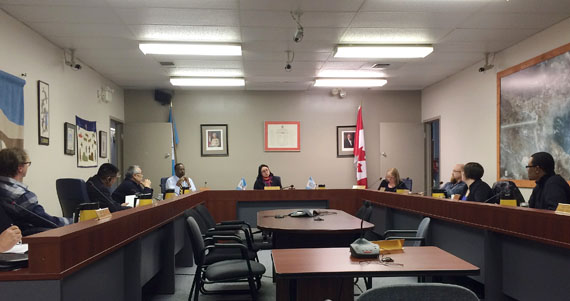 Iqaluit City Council, meeting on the evening of Feb. 23. Councillors voted to increase water and garbage pick-up rates, though residential water customers will be protected from the full force of the water rate increases by a subsidy. (PHOTO BY STEVE DUCHARME)

Iqaluit City councillors passed a flurry of new measures that will raise garbage pick-up and water rates, as well as acquire new land near the city core, Feb. 23 at a regular city council meeting.

An across-the-board water rate increase to two cents per litre will hit businesses the hardest.

Residential users, however, will see most of the increase covered by a subsidy.

After application of that subsidy Iqaluit residences will now pay, just over half a cent per litre for water at $0.007 per litre.

That’s after the automatic government subsidy of $0.013 per litre is applied.

That’s only a fraction of a cent higher than the previous post-subsidy rate of of $0.00571 per litre.

Coun. Terry Dobbin asked the city’s senior director of corporate services, John Mabberi-Mudonyi, if residential businesses, such as daycares, would continue to be be charged the subsidized rate.

“Traditionally we have charged home-based businesses the residential rates. That’s what it is, nothing has changed,” said Mabberi-Mudonyi, who introduced the water amendment to council.

But commercial, industrial and government users will not get any protection from the rate increases.

Owners of such buildings had paid $0.01369 per litre, neaerly 1.4 cents per litres, under the last water rate amendment, passed by city council in 2013. They’ll now pay the two cent per litre rate.

Charges for after hours call outs to the city’s trucked water service will remain the same at $250 per call, plus the cost of the metered water delivered.

That’s an increase of $8.48 a month over the previous rate.

Commercial, government and institutional buildings will be charged $384.78 a month, up by $84.78, for daily garbage pick-up.

According to the bylaw, the city will continue to charge $25 per cubic metre above minimum rates, which are set at a daily volume of 0.5 cubic metres of solid waste.

Acquiring those lots will not cost the city, the director of planning and development, Mélodie Simard, told city councilors.

The city became eligible to own the buildings after the Government of Nunavut passed on an offer from the federal government.

Coun. Joanasie Akumalik, the only councilor to vote against the land acquisition, asked Simard if the land around the RCMP detachment is contaminated.

Simard responded that the land passed its environmental survey assessment.

“In terms of soil, the studies have shown that it’s been sufficiently remediated. The building does have asbestos in it. We do not know the extent of the asbestos,” Simard said.

“The building will need to be demolished. But the costs will be less than the value of the land,” she said.

Simard told council it would take two months to prepare the paperwork to legally transfer the lands to the municipality.

The city has not indicated how it intends to develop those lands.