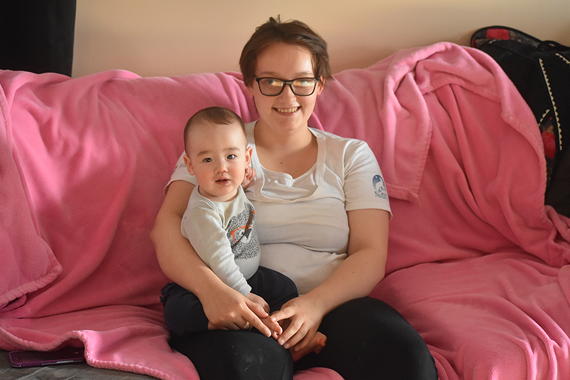 Nicole Alexander, 17, currently brings her infant to class with her at Iqaluit’s Inuksuk High School. She had hoped to place her child in the school’s daycare, but she’s been told there’s no room. The daycare was originally created for students, but today, most of its spaces are taken by the children of non-students. (PHOTO BY COURTNEY EDGAR)

Inuksuk High School’s daycare has lost sight of its original mandate to help students with young children, says the chair of the Iqaluit District Education Authority.

This criticism follows the daycare’s decision to not admit the child of a 17-year-old student.

Because the daycare is full, Nicole Alexander has been attending school with her eight-month-old son, Jake.

Alexander is not allowed in the regular classroom with her peers. Instead, she studies with a computer from the back of the sewing room with a playpen beside her.

“We support the student parent and want her to be placed immediately,” said Doug Workman, the chair of the DEA.

Due to a communications mix-up, Nunatsiaq News was not able to obtain a full comment from the daycare’s board prior to the online publication of this story today.

Workman said that he pressed the daycare’s board of directors at a meeting on Monday to understand why a student parent is not being prioritized at the school’s daycare, which was created in 1994 to serve students.

He said he left the meeting confused.

“We do not understand why Nicole is not getting placed. They have reasons, but do not have clear reasons,” Workman said.

According to Workman, the daycare has 24 spots. Of those, five are used by the children of students, while the rest are used by non-students.

Workman said he would like to see the service revert to its original mandate: student parents as first priority, school staff second and general public last.

He said the daycare has changed its policies in the past few years, and now refuses to bump a non-student’s child to make room for a new teen mom.

Alexander is the only student at the Iqaluit high school who has had to bring a child to class as a long-term solution, said Jean-Philippe Laprise, the communications manager for the Department of Education.

When Erika Alexander, Nicole’s mother, was pregnant with Nicole as a teen back in 2001, the daycare would bump a non-student to make room for a student.

In fact, even today, Arctic College has a similar policy of prioritizing childcare for students rather than non-students. Erika knows this because her other young daughter was bumped out of Arctic College’s daycare recently to make room for the child of a student.

That’s how a school daycare should function, Erika said. She credits the school daycare as the main reason she was able to complete high school and wants that same opportunity for her daughter.

Alexander refused to miss school despite not having access to a daycare, so she brought her infant with her inside her amauti.

But during the first week, when Alexander breastfed the child in class, she was asked to go the counsellor’s office, she said. She said this left her feeling discouraged and she considered dropping out.

Education officials wouldn’t comment on the specific treatment of Alexander, but did say that breastfeeding is allowed in the classrooms of Inuksuk High School.

“We can only state that in a situation like the one you’re asking for, the school usually tries to find a solution that works for the student in collaboration with the IDEA and the parents,” said Laprise.

“The department and the school will encourage students to stay in school and to learn within the school environment and with her peers.”

Workman, however, suggests that Alexander was moved into a separate classroom for liability reasons—and that chemistry and gym classes could be dangerous for an infant.

Alexander said she knows that there are six or seven other pregnant students or young moms in her high school Saputiit class, which teaches girls things like healthy cooking and parenting skills.

She said one of her friends told her she did not want to go back to school because of how Alexander has been treated.

According to Laprise, the high school encourages young mothers to continue their education by helping them submit applications for the Young Parents Stay Learning program, which would subsidize childcare—if they had daycare placement.

He added that the Saputiit program and the guidance counsellors at the school are in place to help students make healthy life choices.

Workman said that the Iqaluit DEA is in the process of arranging meetings with the daycare board to advocate for prioritizing teen mothers like Alexander who need childcare, so they can finish high school.