Photos before the June 19 Iqaluit cleanup, and after, show this river area on the Airport Road much improved. (PHOTO BY FRANK REARDON) 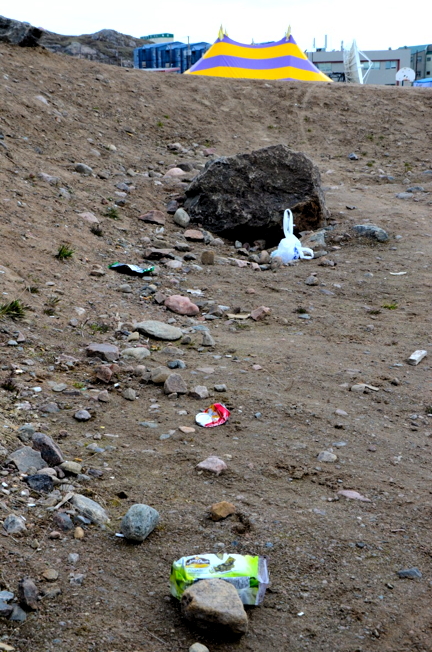 Garbage across the street from the Northmart grocery store in Iqaluit litters the ground outside Nakasuk School, with Alianait’s big top tent in the background. (PHOTO BY DAVID MURPHY)

If we’re talking trash, Iqaluit has to step up its game.

Iqaluit residents tried last week, on June 19, to clean up the capital during the annual spring cleanup, but the day was marred by snowy rain.

Usually the annual cleanup means a morning away from the office cubicle to walk around town in in the sun and pick up the odd Doritos bag — but this year was cold and drizzly.

That meant less people got down and dirty to clean Iqaluit’s streets and streams.

“Approximately 250. Due to the weather, it was down,” said Iqaluit’s community economic development officer, Joamie Eegeesiak.

Although Eegeesiak said she has noticed an improvement in the amount of litter on the ground, she said more can be done.

“Yes there is a difference. Some people just need to get out and do their areas a little bit better,” Eegeesiak said.

“I think it changed. I think it got a little bit cleaner. It’s just the majority of the spots were on the beach where less people walk. And by the river by the airport, it looks so much better,” Eegeesiak said.

Eegeesiak mentioned the city has also hired four summer students, thanks to a donation from Northmart, to pick up trash around the city until the end of August.

Eegeesiak said she’s received complaints from residents about bags of garbage from the cleanup still plunked on the side of the road, not yet collected by the city.

“But it takes time, you know,” Eegeesiak said.

Eegeesiak said there’s no plan yet for another cleanup.

“We haven’t talked about it, but if it’s a demand from the community, and the community is willing to come out, we can,” she said.

One person who supports another kick at the can, so to speak, is local photographer Frank Reardon.

Reardon took photos before and after the spring cleanup and he wasn’t impressed.

He said there “wasn’t any difference” other than the area beside the First Air hanger by the airport and around residential homes.

“It’s obvious the day they picked for the clean-up day, it was snowing and it was terrible,” Reardon said.

That’s a shame, he said, because it would be nice for the community to be clean and tidy for Alianait and Canada Day, Reardon said.

But the city is now forcing property owners to pick up some of their mess.

“We figured with the city wide cleanup happening right now, it would be a good time to start enforcing it,” said Sgt. Michael Hatch said.

That’s when the city picks up larger items, such as old couches, from the curb-side and takes them to the landfill.

After the large item pickup has passed through specific areas of the city, municipal enforcement officers will then check out unsightly areas.

If your land is deemed unsightly, you’ll get a 30-day clean-up notice.

“If they fail to comply with that 30-day notice then they’re given a 30-day order where they’re actually ordered to clean it up,” Hatch said. “Technically, in total, they have 60 days before further action.”

After the 60 days, if the mess is still there, the property owners get a fine. On top of that, city officials clean up the area, and bill the owners on an hourly rate.

No fines have been given out yet but according to bylaws, they can range from $50 to $1,000, depending on if the type of land usage, if it’s a repeat offence and the degree of mess in the area.

Hatch said 30 notices, or warnings, have been handed out to date.

These before and after cleanup photos out on the Federal Road in Iqaluit show little improvement. (PHOTO BY FRANK REARDON)