Iqaluit doing nothing about homelessness: councillor 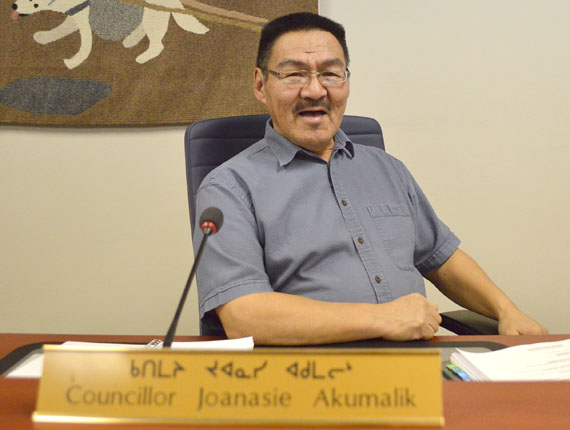 Coun. Joanasie Akumalik said March 22 that the city must follow-up on homelessness strategy discussions that started in 2014 and then fizzled. (PHOTO BY STEVE DUCHARME)

Recent efforts by the City of Iqaluit to respond to homelessness in Iqaluit have been all talk and little action, Coun. Joanasie Akumalik complained March 22 during a city council meeting.

“As you may have known, staff of the city and I were involved in the homelessness strategy sessions some time ago,” Akumalik said.

“Since then, the issue of homelessness has never materialized and nothing has been going on.”

Akumalik’s reference is to a 2013 strategy and action plan tabled by Premier Peter Taptuna in Nunavut’s legislature, entitled Igluliuqatigiilauqta, or “Let’s build a home together.”

As part of that strategy, Akumalik said a working committee was created in 2014 with representatives from the Government of Nunavut, the City of Iqaluit, Nunavut Tunngavik Inc., the Qikiqtani Inuit Association, Nunavut Housing Corp. and Iqaluit businesses.

Its objective was to draft solutions to combat homelessness in Iqaluit as part of a broader initiative throughout the territory.

But the committee only met once, at a preliminary gathering.

“We never met again. [It was] a preliminary meeting. We set up stakeholders. That’s why I’m bringing it up tonight,” Akumalik told Nunatsiaq News.

The previous city council, under Mary Wilman, then the mayor, failed to follow-up on the issue.

That was due in part to other emergencies, like the 2014 dump fire and a growing deficit, Akumalik said.

“I might not be well informed but I think that we need to start taking another look at how to deal with homelessness in Iqaluit,” Akumalik told city councillors.

“There have been incidents where Iqalungmiut have died in a fire because they were living in a shack by the beach,” he said.

Redfern agreed that the current city council must do more.

“Service Canada made a presentation to the Baffin mayors today, and they committed to meeting with the city regarding the homelessness report that was done a few years back,” she said.

Mayors from across the Baffin region are currently meeting in Iqaluit at the Baffin Mayors Forum, set to conclude March 23.

The Liberal government’s March 22 budget promises to spend $2.3 billion on affordable housing in Canada, but much of that is not for housing construction.

Nunavut will get $76.7 million over two years, enough to build less than 200 units across the territory.

The budget also promises $111.8 million to “tackle homelessness” through a variety of projects in communities.

“The City of Iqaluit is one of the 61 cities that has a homelessness strategy agreement with the federal government,” Redfern said.

The mayor is promising to work closely with the GN and Nunavut’s housing minister, George Hickes, on the issue.

“The City of Iqaluit has over 40 per cent of the territory’s population and it continues to grow at approximately 300 new residents every year,” she said.

“As such, we are one of the key and vital components of the territorial strategy.”

The Igluliuqatigiilauqta strategy plan tabled by Nunavut’s premier in 2013 called for improved collaboration among Nunavut stakeholders to identify and address gaps in Nunavut’s housing infrastructure.

That strategy was followed up by an ill-conceived study by then-minister of homelessness and poverty reduction Jeannie Ugyuk in June 2014.

The results concluded that only 100 people across the territory are classified as “homeless.”

Days after that report the GN announced it hadn’t drafted a definition for homelessness, rendering the results of Ugyuk’s study useless.

A 2010 Nunavut Households Needs Survey concluded that approximately 1,220 people across Nunavut do not have a permanent home.

The next regular city council meeting is scheduled for April 6.