Recycling “still has a long way to go” in Nunavut, Bryan Hellwig says 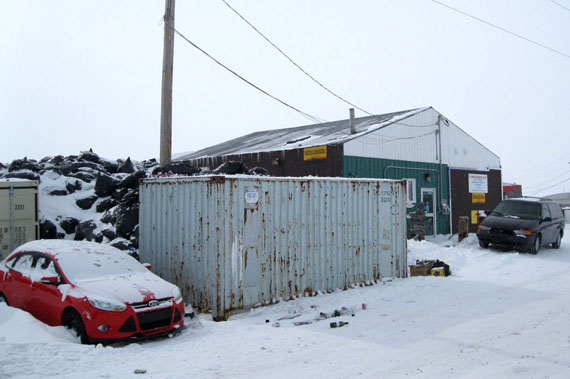 Bagged piles of aluminum beer cans accumulate at Southeast Nunavut Company Ltd., where they await shipment out of Iqaluit once the sealift season begins in July. Company owner Bryan Hellwig operates the depot and Northern Collectables, an Inuit arts and crafts store, as part of his business. (PHOTO BY PETER VARGA) 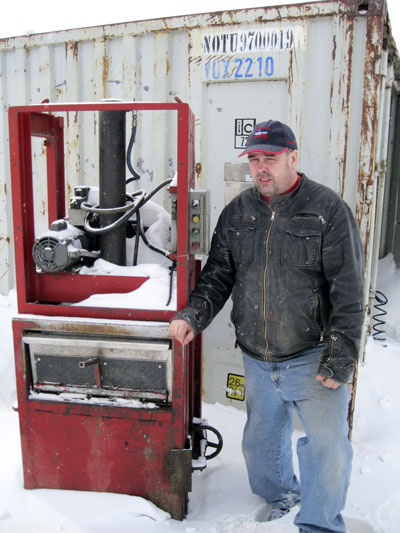 Once summer is underway, Bryan Hellwig will put this aluminum can-compactor back online to crush beer cans returned for deposit to his business, the Southeast Nunavut Company Ltd. Hellwig’s company ships more than 1.2 million beers cans out of Iqaluit each year, to recyclers in southern Canada (PHOTO BY PETER VARGA) 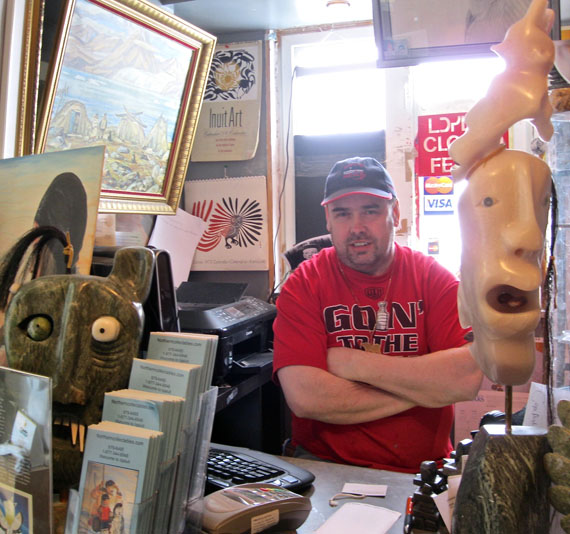 Bryan Hellwig runs Iqaluit’s only can and bottle-recycling depot as well as Northern Collectables, an Inuit arts store, under the Southeast Nunavut Company Ltd. (PHOTO BY PETER VARGA)

Well over a million beer cans make into Iqaluit every year.

And sending those empties back out, clear of the city’s overflowing landfill has been the core of entrepreneur Bryan Hellwig’s business for the past 20 years, but he says the job might be more of a challenge than it’s worth.

“I have buyers who take the cans,” he says, referring to recyclers in the area of Montreal, more than 2,000 kilometres away.

“That’s not a problem. The problem is getting a half-decent price to at least cover your shipping.”

Hellwig runs the only regular can and bottle-recycling depot in the territorial capital through his business, Southeast Nunavut Company Ltd.

Even though he’s seen Iqaluit double in size over the past two decades — from a remote Arctic community of the Northwest Territories, to capital of Nunavut with a population topping 7,500 — sending beer cans and liquor bottles has become no more viable than it was when he first started.

“Recycling is still in its infancy” in Nunavut, he says. “It has been for the last 20 years or so, and it still has a long way to go.”

Twenty years is a long infancy, but Hellwig is sure recycling has a future in the territory.

The root of the challenge lies in the question of whether the territory’s economy — starting with Iqaluit — can stand on its own two feet.

Both the can-and-bottle collection depot and arts shop are at the same location, off the eastern stretch of Federal Road, where Iqaluit’s industrial neighbourhood begins.

“I recycle stone too,” he joked. Most of the art on sale at Northern Collectables are stone carvings by Inuit artists and craftspeople from throughout Nunavut and Northern Quebec.

Running a local business that sells locally-produced finished products is a fickle matter in Iqaluit, he says, reflecting on the overall economics of the city.

“It’s not like down south where they can re-use everything.”

The central problem, in recycling as in production of finished products, are extreme costs of transportation to and from Iqaluit — just the same as for all other communities in Nunavut.

“Transportation is number one. Cost of doing business is number two. Labour cost is number three, and they all come together and do you in,” he laughed.

“This kind of program is self-supporting, in essence.”

Purchases of liquor are made through Nunavut’s liquor commission, which include can and bottle deposits as well as a handling fee.

Hellwig’s business pays the deposit to customers, which he then gets back from the liquor commission, in addition to the handling fees charged on all liquor shipped into the territory.

The company’s biggest customers are Iqaluit’s Royal Canadian Legion and the city’s restaurants and bars.

Returns from Iqaluit residents round out the rest. These bring in anywhere from 1.2 to 1.4 million beer cans every year, Hellwig says.

“I look at this more as my community service than anything,” he says. “It’s part of the business that I do. Could I survive on it by itself? No.

“The cost of doing business here is Iqaluit is rising every year, to a point where it may eventually become unviable.”

To keep it viable, Hellwig must run the operation seasonally, with the sealift-shipping season — from July to October.

Running a can and bottle depot year-round would require a building, he says, which would add heating and electricity bills.

Putting up a building to hold beer cans alone won’t fly, at least not without an added source of revenue to pay utility bills and other real estate-related expenses.

“You’re not going to build a building here in town to hold beer cans,” he says, which is why Hellwig simply keeps the cans outside.

A depot structure would generate extra costs, “and every time you turn your head around in this shit town, all you see is the costs going up,” he says with a hint of resentment.

Shipping out a sealift container loaded with crushed cans cost about $4,000 in 2013, he says.

“You try to figure out why it costs so much. I never could — especially when the boats are going back (empty) anyways.”

Charges to load boats heading back south could not be much more than $400, Hellwig estimates.

“What else do they need? They’re going back anyways.”

Asked if there is much of a will to recycle rather than dump waste in Nunavut, Hellwig answers that he believes there is — “as long as there’s a monetary value for it, at the end of the day.”

“There are certainly die-hard people who are into recycling, who don’t care about the money,” he says. “But unfortunately the majority bring it back because they’re putting money into their pocket.”

A program run by Arctic Co-operatives Ltd. presents the only other aluminum-can recycling option in Iqaluit, which pays a sum to non-profit groups who collect.

It does not, however, pay deposits back to contributors.

Hellwig’s Southeast Nunavut Company returns 10 cents for each beer can and beer bottle, and 25 cents for liquor bottles. He estimates the aluminum-can return angle of his business has sent 30 million empties back to recyclers in southern Canada over the past 20 years.

“That’s 30 million cans saved from the dump,” he says. “Every little bit helps, I guess.”