All schools closed until at least Wednesday 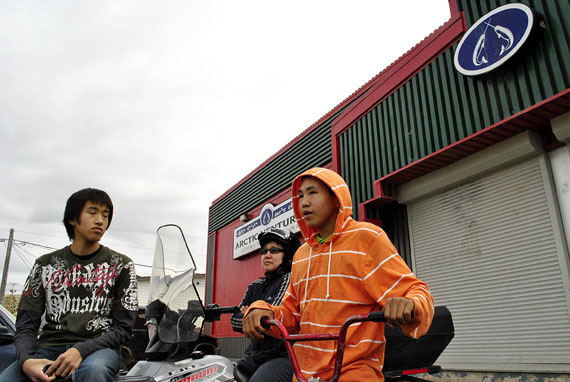 Gordy Kootoo, Oloria Pitseolak and Jason Pitseolak sit at the empty parking lot in front of Arctic Ventures in Iqaluit at around 1:00 p.m. Aug. 29. A series of rotating power blackouts brought chaos to Iqaluit Aug. 29, shutting retail stores, restaurants and schools, and idling many workers. Arctic Ventures was able to re-open later in the afternoon, but the on-off cycle of rotating blackouts is likely to continue until at least Wednesday. (PHOTO BY JIM BELL) 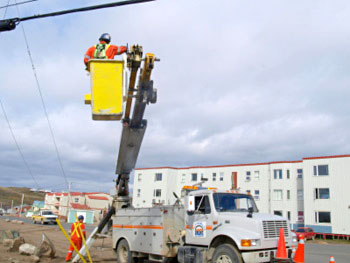 Qulliq Energy Corp. linesmen prepare to throw a switch to restore power to feeders connecting Upper Iqaluit. Iqalummiut faces the prospects of rolling power outages until at least Wednesday after two turbines at the city’s power plant broke down. (PHOTO BY CHRIS WINDEYER)

Iqaluit faces the prospect of several days of rolling blackouts after the main generator at the city’s power plant broke down during the early morning hours of Aug. 29.

Power was out early Monday in the Plateau subdivision, parts of Tundra Ridge and Apex.

The Government of Nunavut also announced on Twitter that all schools in Iqaluit are closed. Schools will re-open Wednesday, Aug. 31, the GN said.

Peter Mackey, president of Qulliq Energy Corp., said the outages began when the power plant’s main generator broke down at the same time that another generator had been taken offline for maintenance.

“It’s not something that’s kept on the shelf,” he said.

The two remaining generators can only produce 5.2 megawatts of the 7.5 megawatts Iqaluit needs to fully function during the summer.

QEC put replacement parts on rush order, but Mackey said the soonest Iqaluit could be back at full power is Wednesday.

At the Arctic Circle Dental Clinic in the Tundra Ridge neighbourhood, dentist Steve Partyka stood in his darkened office waiting for the lights to come back on so he could start seeing patients again.

He said he wishes he had power at his clinic so he could serve patients, including emergency cases referred by Qikiqtani General Hospital. The outage will snarl patient appointments, forcing many people to rebook, he said.

“I don’t want to start surgery and not be able to complete it,” Partyka said.

The clinic can still do cleanings and some of the more low-tech dentistry, but even Partyka himself was inconvenienced by the outage.

Staff at DJ Specialties said their store would remain open but would be taking cash only while the power is off.

According to a schedule supplied by the QEC (see document embedded below), power was 3:00 p.m. to Happy Valley, Tundra Valley, Road to Nowhere, and Apex, shut down again at 6:00 p.m., then restored again at 10:00. Mackey said the schedule was designed to reduce the impact of outages on vital facilities like the airport and hospital.

Power was supposed to have been restored to the Tundra Ridge/Tundra Valley area until 1 p.m. but in a news release QEC said “switching issues” prevented the juice from coming back online on schedule.

This on-off cycle is supposed to continue every four hours until Aug. 31.

At the same time, power to the downtown area, Plateau subdivision, the justice building, and Arctic College is scheduled to shut down at 1:00 p.m., then follow the same four-hour on-off cycle.

At the area around Arctic Ventures and the public health building, power is supposed to rotate every two hours.

The City of Iqaluit urged people on trucked services to conserve water, but said deliveries will continue at a reduced pace while the power is off.

Government of Nunavut offices and the Arctic Winter Games arena closed for the afternoon Aug. 29. Dozens of people were walking around downtown and many more took their kids to city playgrounds, taking advantage of the sunshine.

“We have 17 power plants in Nunavut that are at or near the end of their design life,” he said. “The power plants themselves, the generators, we’ve been attempting to keep on top of (them) the past 10 years. That’s where the majority of the money in (the) capital (budget) has been going to.”

Many communities don’t just need new generators, but entire new power plants and the utility just doesn’t have the money, Mackey said. And despite an 18.9 per cent rate hike that took effect April 1, QEC can get only so much money from ratepayers. The federal and territorial governments need to step in with funding, he said.

With files from Jim Bell

Where and when power will go down in Iqaluit: