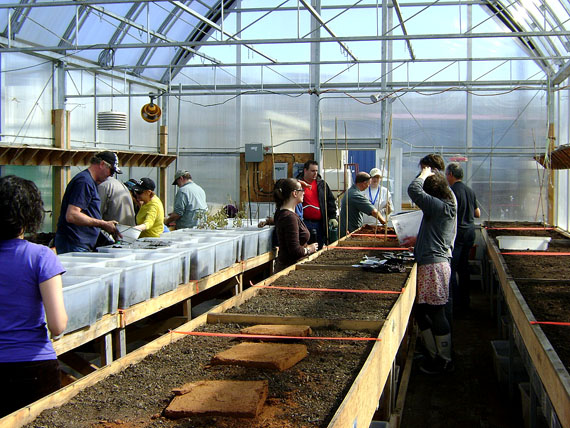 The Iqaluit greenhouse in June last year, on its opening day. Preparations for the 2013 growing season are underway, with a work party set to plant the first seeds June 1. The Community Greenhouse Society will take on new members starting that day, and welcomes non-member volunteers who are willing to help. (PHOTO COURTESY OF THE IQALUIT GREENHOUSE SOCIETY)

Growing food in the Arctic is now a group effort at the Iqaluit community greenhouse.

Instead of parceling out separate plots to different groups, as in past years, members will work the soil together when the gardening season opens June 1.

“The majority of members were interested in that,” said Suzanne Etheridge, treasurer of the Iqaluit Community Greenhouse Society.

Decided at the group’s annual general meeting in May, the plan is designed to allow the group to make the most of the 1,000-square-foot structure, the only one of its size to grow produce in Iqaluit.

The easiest-growing vegetables would be planted in the greatest quantities, putting different varieties of lettuce, kale, beans and peas at the top of the list, Etheridge said.

Instead of minding their own vegetables in their own plots, members will be responsible for the entire greenhouse and care jointly for the plants that prove to be most successful.

“This year is going to be sort of experimental,” said Etheridge, a third-year member of the society.

“It’s almost like a farm-style, I think. We’re excited about it and have a lot of hope for it to work out.”

Once all soil is in place in June, and seeds planted, members will tend to the plots in rotation, day after day.

When it comes time to harvest, members will count vegetables by weight and quantity, she said, and split the produce among themselves.

“We’ve never had an accurate count of yield, and we’re hoping this year we’ll be able to do that.”

Society members hope the new method will make it easier to finally achieve a few unmet goals in the near future.

“If it is successful, I think it will be a chance for us to start applying for grants and special projects, and we might hopefully one day be able to expand,” Etheridge said.

This may allow them to provide fresh food to the community, which has been one of the society’s longstanding aspirations.

Meanwhile, fundraising efforts will continue to keep the greenhouse afloat, she said. These are needed to cover between $3,000 to $6,000 in costs over and above what’s covered by membership fees, grants and donations.

“It’s an expensive venture to run a greenhouse,” said Etheridge. Soil and seeds are brought up from the South, and routine maintenance and repairs to be done when spring sets in.

“We’ll cover it with car-washes, bake-sales, whatever we need to do,” she said.

The society typically attracts 40 to 60 members each season. This year’s community gardening plan should allow for more members than usual, she said.

Preparations for the 2013 gardening season kicked off at the society’s annual general meeting, May 11.

A work party will gather at the greenhouse on Saturday, June 1, where members will plan the lay-out for planting, prepare soils plant the first few seeds and paint some structures. All interested in helping are welcome, including non-members.