Group effort raises enough food to share with those in need 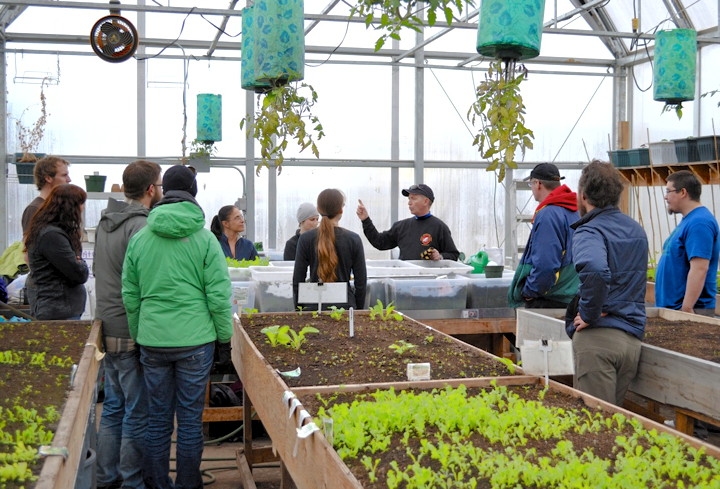 Teamwork proved to be the right formula for success for the Iqaluit Community Greenhouse Society last year, when members worked the soil together to raise community greenhouse’s highest yield on record.

“Our yield was just under 50 kilograms last year,” said Suzanne Etheridge, treasurer and spokesperson for the society. “It was our highest ever.”

Unlike previous years, when gardener-members worked separate plots in small groups, society members pooled their efforts to produce the biggest crop since the greenhouse started operation in 2007. The record food yield was enough to share with charitable community services for the homeless and those in need.

Vegetable harvests went to the Qayuqtuvik Soup Kitchen, as well as Sivummut House, the community’s shelter for women and children, and the Uquutaq Men’s Shelter.

The society hopes to improve their record for 2014. As it gears up for the new growing season, starting in June, members must first decide what vegetables to plant.

Fast-growing crops that proved to be the most successful are at the top of the list. These include varieties of loose-leaf lettuce, kale, spinach, radishes, carrots, beans, and peas.

“We do like to keep with what works,” said Etheridge. The society has tested several varieties of plants over the years. Its eighth year of operation will benefit from “an extensive library of experience, where we know what’s successful and what isn’t,” Etheridge said.

Membership and fundraising efforts keep the greenhouse going year after year. Even though Iqaluit residents have shown much interest in volunteering their time, Etheridge said the society hopes to better harness that interest by expanding its membership for 2014.

“We’re excited about the number of people that have signed up for updates (via email), so we suspect we’ll start seeing them pop out now that there’s more activity at the greenhouse,” she said.

The society’s board decided to bring this season’s membership fees down to $75, in an effort to make it more accessible to all Iqalummiut. The fee includes everything gardeners need.

“We provide it all, including experience and advice,” Etheridge said. Members tend to the plots in rotation, on a daily basis, tending to soil, seeds and water in the 1,000-square-foot structure.

The mix of vegetables planted this year will be largely the same as in 2013, with some tweaking in favour of varieties that have shown better results in Iqaluit’s long periods of daylight, within a short three-month growing season.

Loose-leaf lettuces and other leafy plants such as kale and spinach grow abundantly enough to be harvested every few weeks. Heavier crops such as daikon and red radishes, carrots, beans and peas call for less frequent harvests.

Fundraising efforts continue to cover most of $6,000 needed to operate the greenhouse every year. The society’s most recent fundraising successes include proceeds raised through sales of a cookbook produced by members, and a trivia contest this year.

“We want to expand our membership to people who need the food the most,” Etheridge said, “particularly for families that can’t afford it otherwise.”