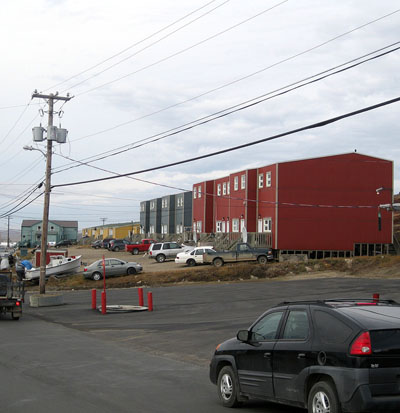 The Nunavut Housing Corp. asserts ownership of these three buildings in Iqaluit, but the city has not registered the NHC’s name for the lot that the building sits on and still sends tax bills to the former owner, the NWT Métis Development Corp., which relinquished ownership in 2007 when its lease expired. The corporation has asked the city to forgive accumulated interest charges on the $336,000 bill racked up by the Métis corporation, but the city won’t change its lot lease records until after the entire bill is paid. (PHOTO BY PETER VARGA)

The Nunavut Housing Corp. refuses to pay city tax arrears of more than $336,000 on a set of buildings it controls in Iqaluit, until the city agrees to forgive one-third of the bill, which represents interest charges racked up by the previous owner.

“All we’re asking for is relief from the penalties, because it’s unfair that those should be paid by the Nunavut Housing Corp.,” Alain Barriault, president and CEO of the corporation, told the city’s planning and development committee of the whole in a Sept. 25 meeting.

The corporation has not registered the lot lease under its name with the city, and must first pay all arrears in order to do so, Jennifer Catarino, Iqaluit’s director acting director of planning and development, told Barriault.

Throughout the meeting, city staff and members of city council repeatedly reminded Barriault and Larry Journal, manager of mortgages and housing with the corporation, that forgiving any part of the arrears is against the law.

City officials also reminded them that the Métis corporation’s lease was never properly surrendered, and that the Housing Corp. must follow due process by registering as leaseholders of the property.

“The land lease still needs to be surrendered,” Catarino said.

“You keep saying you’re willing to pay the property taxes, but you haven’t done anything to correctly get Nunavut Housing Corporation’s name on the lease,” Catarino continued.

“It’s convenient to say you’re willing to pay, but you don’t want to pay the penalties, when this could have been avoided had you been [declared] the owner at the correct time.”

Barriault replied that the City of Iqaluit refused the Métis corporation’s surrender of the lease in 2006, until property taxes they owed were paid up.

The city also demanded that an equity lease be put in place, which was never done, he said.

“The city was asking for a $229,000 equity lease in order to accept the surrender,” he said. “That’s where things stalled.”

The Métis corporation’s lease expired in April 2007, at which point the land automatically reverted to the Government of Nunavut’s control, Barriault said.

Catarino countered that the city does not require an equity lease on the property for a transfer to occur, but that all taxes on properties must be paid before any property transfer occurs.

City councillors were clearly baffled and upset by the impasse. Coun. Mary Wilman reminded that the meter on the accumulated arrears, going back six years or more, continues to grow.

“There’s something I’m not quite understanding here,” she said. “I own a house. I know I should be getting bills – and if I don’t pay, it’s flying around there somewhere. I would be so scared. It would be on my onus to check.”

“It seems to me that Nunavut Housing Corp. at the beginning didn’t follow the proper process,” said Coun. Romeyn Stevenson.

“Rather than dealing with the problem it sounds like the GN walked away, and pretended it didn’t happen.

“I think this just speaks to the GN in the way they deal with municipalities.”

Stevenson said council has twice dealt with the Housing Corp. in the past five years, “and both times you’re trying to override process with the City of Iqaluit.”

Coun. Kenny Bell, who chaired the meeting, recommended that the city and the Housing Corp. meet together with the territorial Department of Community and Government Services to resolve the issue.