“There will be virtually no difference for the voter” 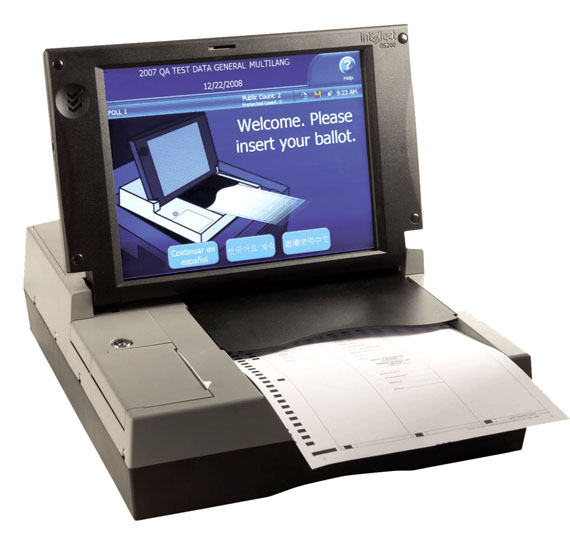 On Oct. 15, Iqaluit election workers will use this electronic scanner-tabulator to count ballots cast in the six Iqaluit voting events scheduled that day. (IMAGE COURTESY OF KIRT EJESIAK)

Even better, those results ought to be accurate.

“If everything works out fine, all the results should be available on the web in half an hour,” Ejesiak said.

Iqaluit City Council, at a meeting this past Aug. 28, authorized use of the vote scanning and tabulation machines, which are supplied by a firm called Elections Systems and Software, or “ES&S.”

This marks acceptance of a recommendation Ejesiak made in November 2009, following a municipal election that, after many hours of election night counting, produced preliminary results that left city councillors and many other residents scratching their heads.

After the Oct. 19 municipal election, candidate Romeyn Stevenson finished in ninth place on the preliminary council tally, just one vote behind David Alexander.

Stevenson asked for a recount.

The result of that recount, released Oct. 27, 2009, put Stevenson four votes ahead of Alexander for the eighth and final spot on council.

At the same time, the recount revealed big disparities between the preliminary election night count for city council and the actual result.

Mary Wilman, for example, ended up with 35 more votes than poll workers had counted on election night.

But this time around, an ES&S tabulation device, called the DS200, will do counting work once done by humans.

But after that, the ballot will be fed into the tabulation machine, which will scan the paper ballot and drop it into a secure container.

“There will be virtually no difference for the voter. We’ll make sure they’re on the voters’ list, we’ll hand them the ballot, they’ll mark their X and that basically is it,” Ejesiak said.

The firm that makes the DS200 will print the paper ballots to be used in the election, with text in English, Inuktitut and French.

And for the first time, they will include photographs of each candidate to help voters who don’t read well.

Election staff will keep all paper ballots as a backup, and if there’s a power failure on election day, those ballots can be counted manually, Ejesiak said.

They’ll also keep an extra machine on standby, and poll workers will get access to telephone support from ES&S, Ejesiak said.

Depending on where they live, where their children go to school and whether or not they own property, Iqaluit residents will get a chance to participate in up to six different voting events Oct 15.

• an election for mayor;

• an election, for Iqaluit residents who do not live in Apex, to choose five members of the Iqaluit District Education Authority;

• an election, for Iqaluit residents who do live in Apex, to choose four members of the Apex District Education Authority;

• an election among francophone parents to choose five members for the Commission scolaire francophone de Nunavut; and,

• a referendum, among ratepayers only, on the question of whether to allow the city to borrow up to $40 million to pay for a new aquatics centre.

The only exception is the ratepayers referendum. Eligible ratepayers will cast ballots for that referendum at the cadet hall only.

The deadline for making revisions to the voters list is Oct. 5. An advance poll will be held Oct. 5 also.

Information on the election, as well as downloadable forms, is available at the 2012 Iqaluit municipal election website.