Nunavut stands in solidarity with Muslims 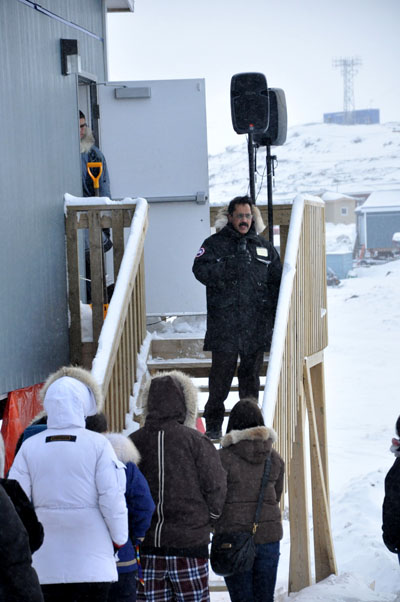 Muhammad Wani, vice president of the Islamic Society of Nunavut, speaks Jan. 30 in front of the Iqaluit mosque. (PHOTO BY THOMAS ROHNER) 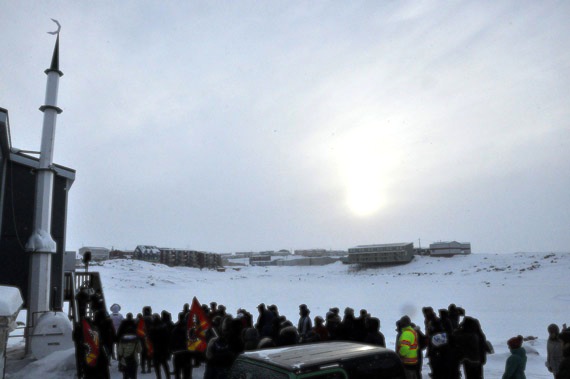 Iqalungmiut gather at the Iqaluit mosque Jan. 30 to show their solidarity with Muslims in the wake of yesterday’s deadly shootings at a mosque in Ste-Foy, Quebec.

As people in Canada and around the world reacted with grief and shock following news of a deadly attack on a Quebec City mosque Jan. 29, Iqaluit residents gathered for a display of love and solidarity around the local mosque Jan. 30.

More than 80 Iqalungmiut took time from their lunch break Jan. 30 to observe a moment of silence, as they held hands in a big circle in front of the Iqaluit mosque.

“I’m thankful… for their solidarity and support with the Muslim community,” Muhammad Wani, vice president of the Islamic Society of Nunavut, told media at the gathering.

“At the same time, I’m very sad for those people who died yesterday by that cowardly act of a terrorist attack on our Muslim brothers.”

The event was organized by the Qanak Group in Iqaluit, whose event page on Facebook said the event was “to show love and support fellow Nunavummiut,” in wake of the killings.

Media outlets across Canada and the world have reported that six people died Jan. 29 Cultural Centre of Quebec’s Grand Mosque in Ste-Foy, a suburb of Quebec City, after a gunman opened fire while evening prayers were ending.

Some 20 other people were injured and a few remain in critical condition, according to media reports.

The sole suspect, a 27-year-old student at Université Laval, was to have appeared in court today, multiple media reports said.

Police are still investigating the killings, but Prime Minister Justin Trudeau called the incident a “terrorist attack,” shortly after news of the killings broke.

“It is heart-wrenching to see such senseless violence. Diversity is our strength, and religious tolerance is a value that we, as Canadians, hold dear,” Trudeau said in the Jan. 29 statement.

In Iqaluit, Wani said the Iqaluit Muslim community would pray for those who lost their lives at the Cultural Centre of Quebec’s Grand Mosque Jan. 29, where roughly 40 people had gathered for Sunday evening prayers.

“We also pray for their families, to bear this irreparable, irrevocable loss,” said Wani.

None of those killed, or their families, have direct ties to the Muslim community in Iqaluit, Wani said, as far as he knew.

A day before the Ste-Foy shooting, United States President Donald Trump signed an executive order preventing nationals from seven mostly-Muslim countries from entering the U.S. for the next 90 days.

Trudeau later clarified that Canadians with dual citizenship from one of those seven countries—Syria, Iraq, Iran, Sudan, Libya, Somalia and Yemen—would not be affected by Trump’s order.

Wani said he didn’t know any Iqaluit Muslims affected by the travel restrictions either.

“We really condemn that as well, but as a government employee, I cannot comment more.”

Since the mosque opened about a year ago, Wani said Iqaluit residents have welcomed the Muslim community with open arms.