Organizers line up big mix of traditional and fresh events 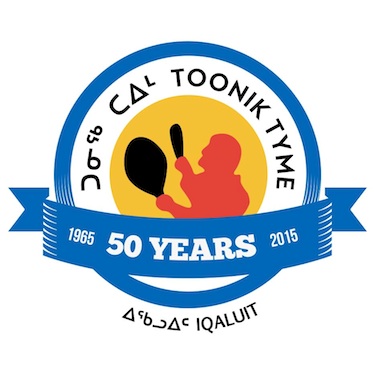 The Toonik Tyme spring festival celebrates its 50th this year. 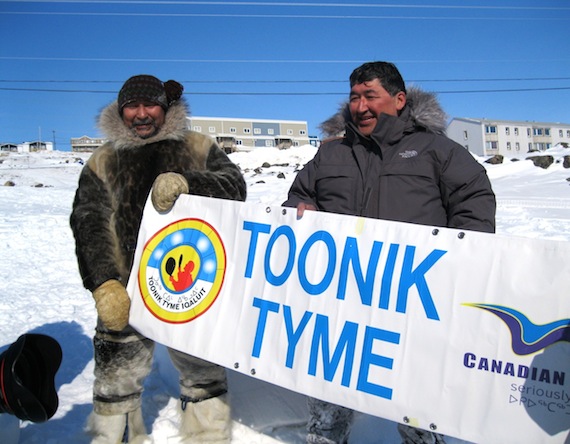 Solomon Awa, left, celebrates with the winner of the Toonik Tyme festival’s igloo-building contest in 2014, Paul Irngaut. Awa will direct many of the Iqaluit festival’s traditional Inuit activities for this year’s 50th anniversary. (PHOTO BY PETER VARGA)

Iqaluit’s 50th Toonik Tyme festival promises to make the Nunavut capital bloom with a city-wide celebration of spring, starting with the Easter weekend and running well into April.

Back by popular demand, organizers of this year’s half-century anniversary celebration have lined up more traditional Inuit activities, in keeping with the festival’s roots, and included some fresh events.

“It was a huge balancing act, with some people wanting some things modernized, and a lot of others wanting to keep it more traditional,” said Travis Cooper, president of the Toonik Tyme Society.

Cooper and fellow volunteer organizers lined up a bigger “cultural presence” at last year’s festival, he said, which worked out well.

“I was able to bring in a lot of new board members. And they’ve been a tremendous source of help and resources.”

This year’s slate of events is bigger than ever, Cooper said — amounting to nine days, plus an added weekend of “post-Toonik Tyme” events that take place after closing ceremonies.

“There’s so much going on, that we were having difficulties creating the schedule in the first place,” he said.

Well before the schedule came together, organizers were sure to line up the biggest show of this year’s festival. Tickets for the band, A Tribe Called Red, who will play for this year’s Big Band Night on April 3, were already up for sale on the internet at the beginning of March.

“Getting A Tribe Called Red up here is huge, and it’s a great way to celebrate the 50th,” said Blake Wilson, executive coordinator of Toonik Tyme’s 50th festival.

The Ottawa-based band blends modern electronic urban styles with the sounds of traditional pow-wow vocals and drumming of their First Nations cultures, the group says on its website.

This year’s festival also opens a view to other Canadian Aboriginal cultures through the imagiNATIVE film and video tour, which will be showing a feature film and a series of shorts by indigenous artists at Astro Theatre, April 2.

Toonik Tyme officially gets underway on the afternoon of Thursday, April 2, also a civic holiday in Iqaluit, when the first events kick off around Toonik Tyme Central — the organizers’ base of operations in front of Nakasuk School. It all starts with the opening face-off of a “kids’ skateless hockey tournament” at 1:00 p.m. on the school’s rink, and elders’ bingo at the Elders’ Qammaq across the street.

The curling rink will host an opening ceremony at 7:00 p.m., which will feature musical performances by Nunavut musicians.

Presented by Alianait, the show will open with the Inuksuk Drum Dancers and throat singing by Becky Kilabuk and Celina Kalluk.

Cooper will announce and introduce the 50th anniversary festival’s Honourary Toonik or “Tuniq,” who presides over the 10-day event.

“Nominations within the community will play a large factor in it,” Cooper said about the choice of the Toonik among more than 20 nominees.

Traditional Inuit games and cultural events will take up a big share of the festival’s busy schedule. Expert snowhouse-maker and former Toonik Solomon Awa will direct an outdoor and indoor series of traditional games on April 4, as well as another favourite, the igloo-building contest, on Easter Monday, April 6.

Fans and participants of traditional games will get a chance to witness the revival of a lacrosse-style stick-and-ball game, unique to Inuit, that faded away in the 1970s, Cooper said.

Cooper and the City of Iqaluit will direct other traditional events that showed great success last year, such as the youth Inuit games, tea and bannock contest, seal-hunting and seal-skinning contests.

A “closing community feast and fashion show” will celebrate the festival’s cultural roots in style, with food, music and a northern fashion show on April 9 at the curling rink. Gideonie Joamie and his band Kamaalukutaat will play a mix of traditional Inuktitut songs.

“We’ve doubled up the amount of food that we’ll be serving at the feast, as well as having Skills Canada come in and provide all of the cooking and support for that event,” Cooper said.

The closing feast, like most of this year’s events, will be free for the public.

“You’ll notice at some of the events, we’ll have donation boxes for the food bank,” Cooper added.

The festival’s last concert, April 10, will be a “wrap-up” show featuring the Jerry Cans at the curling rink.

The weekend of April 11 will feature a last rush of “post Toonik Tyme” events, starting with a geocache scavenger hunt at Sylvia Grinnell Park on Saturday morning.

Snowmobile drag races will be buzzing on the sea ice that afternoon. Meanwhile, the Iqaluit Centennial Library on the shore will host a quieter set of events: a chess tournament, and drop-in craft program for families.

Festival followers can keep on top of schedules, and any changes to events that are weather-dependent on the festival’s new website, Twitter feed, and Facebook page.

Each is marked with the festival’s unmistakable new logo, designed for the 50th anniversary.

Cooper credited the City of Iqaluit for offering added help with venues and financing for this year’s 50th festival, as well as expanded financial support offered by a long list of private companies and organizations this year.

“We got a lot of great sponsors this year, literally dozens of them,” Wilson said of the enlarged contributions from non-governmental organizations. “We got more broad support this year, so it’s a real community project this time.”