Eastern Arctic teams ready to do battle at season-ending tournament 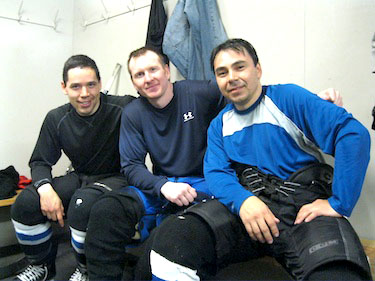 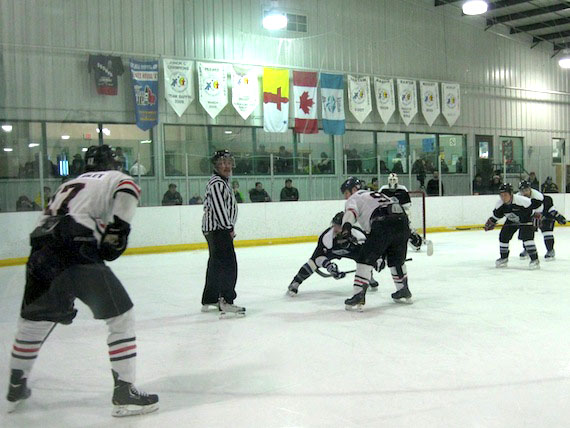 Team Rankin Inlet and Iqaluit line up for a face-off at the Arctic Winter Games Arena in Iqaluit during the 2013 Northern Hockey Challenge tournament. The two rivals will do so again in a shortened version of the tournament, April 25 to 27, in Iqaluit. (FILE PHOTO)

The North’s highest-level hockey tournament hits the ice again in Iqaluit this weekend, but this year’s edition won’t be the huge winter-long series that hockey fans saw in 2013.

Last year’s Northern Hockey Challenge was a one-of-a-kind battle between teams from seven communities, played out across Nunavut and the Northwest Territories over three months.

This year’s version will keep the tournament alive — but as an abridged weekend tournament with mens’ senior recreational teams from Iqaluit, Rankin Inlet, Kuujjuaq, and Ottawa.

As player-coach for the Iqaluit Icemen last year, Coté led a team of Iqaluit’s best in last year’s championship series against Yellowknife in the Northwest Territories capital, which Yellowknife won.

With only four teams, this year’s weekend tournament will be every bit as competitive but “not drawn-out,” said Coté. “You’re not playing six games over a weekend. It’s not as tiring and you get a bit more quality.”

This year’s sudden decision to hold a 2014 tournament was sparked by hockey-playing enthusiast Cody Dean, of Rankin Inlet, who lives in Iqaluit.

Too few members of team Rankin Inlet were able to make it to the Toonik Tyme senior men’s hockey tournament in Iqaluit this month, he said, which left the tournament without the usual high level of competition.

“The weather didn’t cooperate,” Dean said, and the core of his Team Rankin Inlet stayed home.

Dean and fellow hockey enthusiast Victor Tootoo decided to make up for the disappointment by putting out a call to bring back the Northern Hockey Challenge for 2014.

In just two days of hard work, Dean and Tootoo revived the tournament thanks to the willingness of lead sponsor First Air airlines, the men’s hockey senior leagues of Rankin Inlet and Iqaluit, and various corporate sponsors.

“From the moment I decided we were going to go ahead with this, we stuck with it and made it happen,” Dean said.

Last year’s top competitors were equally determined to make it to Iqaluit, regardless of lengthy flight travel times. Unfortunately, this year’s edition will have to do without the defending champion Yellowknife Flyers.

“It was more of a struggle for them, because of the cost and time,” Dean said.

Yellowknife was part of the four-team competition schedule until April 23, he said, when the call came back that they could not attend.

A team from Ottawa, made up of group of friends with connections to Iqaluit, will round out the tournament to four competing teams, Dean said.

The Ottawa Redwings will face off against the Iqaluit Icemen in the tournament’s opening match-up, Friday, April 25, at the Arctic Winter Games Arena.

“What’s nice to see is how excited all the kids get, to see the players from out of town,” said Dean, who will play for Rankin Inlet.

“It’s the highest level of hockey we play. The calibre is what sets it apart from other tournaments,” not only in Iqaluit but in the North overall, he said.

Plans for next year’s Northern Hockey Challenge are open, said Cote. This year’s tournament “helps bring continuity to the Challenge.”

No matter what format the tournament takes, “it’s a good challenge between the major centres, the bigger hockey communities,” he said. “We’re looking forward to keeping it alive for another year.”

The 2014 Northern Hockey Challenge opens Friday, April 25 at the Arctic Winter Games Arena in Iqaluit at 7:00 p.m., and continues throughout the weekend at the same rink.

The tournament closes with a championship game Sunday, April 27 at 6:00 p.m.

Admission is $10 for a day pass and $20 for a weekend pass. Entry is free for children under 12 years old and elders 65 years or older.

See the Northern Hockey Challenge website for schedules and other details.