“Even when it hurts or something, you have to get back up and try again” 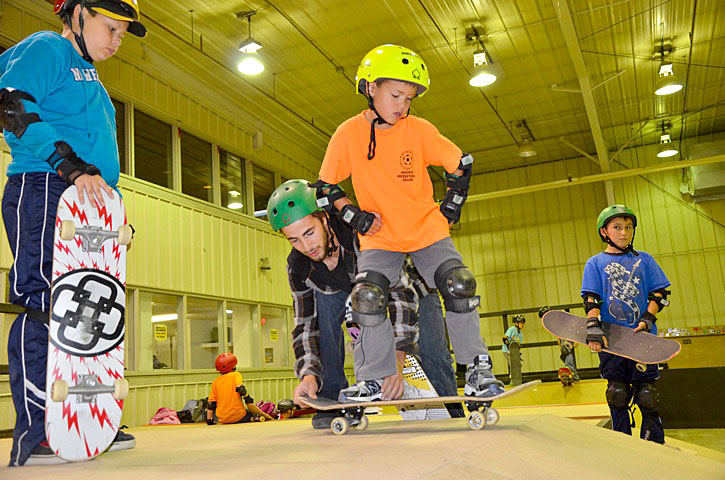 Instructor Roger Besserve, 26, helps a youngster preparing to roll down a ramp at the Iqaluit skate park Aug. 28 as part of the summer skate camp put on by the City of Iqaluit. The camp drew 30 kids this year — the biggest turnout ever. (PHOTO BY DAVID MURPHY) 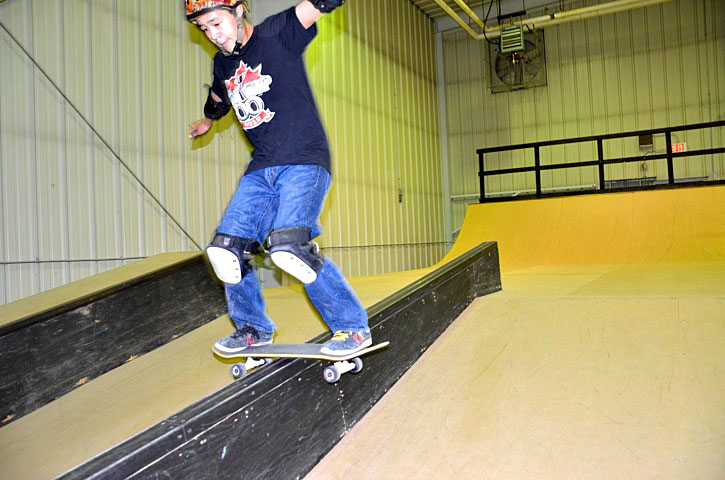 Isaac Idlout, 16, slides down a rail at the Iqaluit skate park Aug. 28 as part of a summer skate camp put on by the City of Iqaluit. The camp runs until Aug. 30 and ends in a competition. (PHOTO BY DAVID MURPHY)

A kid no older than 12, decked out in a helmet, elbow and knee pads, climbs to the top of a steep three-metre high ramp, dragging behind him a skateboard that’s half his size.

He wedges the front of the skateboard onto the lip of the ramp, suspends the rest in mid-air, and prepares for his smooth descent downwards.

That’s the goal, at least.

After receiving a word of instruction from skateboard instructor Ian Gauthier who kneels down next to him, the boy pushes off.

He stands on the board for maybe half-a-second before his knees thump against the wooden ramp, and he slides the rest of the way on his legs.

He stays down for another second — blinks — and gets back up to do the whole process over again.

But the second time he falls down even harder, sprawling on his elbow pads this time. The third time proves not-so-lucky either.

“It’s kind of like life, when you [fall], even when it hurts or something, you have to get back up and try again,” Besserve said.

“[Then] you have to get back up and conquer your move and, like, once you do it you feel like — oh, okay, that’s why I fell three times, but it’s worth it,” said Besserve in a casual California-surfer-like tone, but with a francophone accent.

Besserve has been skateboarding for 13 years and has some podium-finishes under his belt from various competitions in Quebec and Ontario, all the while being sponsored by a skateboarding shop in his hometown of Gatineau.

He has also visited Iqaluit over the past five years to help run the skateboard camp.

“I will come as long as they ask me to. Just helping the kids in general, I love the sport,” Besserve said.

“It’s a wooden board with wheels on it, but the love you can get from that — it’s pretty amazing. And since kids don’t have much to do here, it’s fun to teach them something else that’s not really from their environment,” he said.

The main goal of the camp is to teach kids the basics of rolling around on skateboards or rollerblades.

“How to balance yourself, concentration on how to stay focused and do the tricks,” said the coordinator of the skateboard camp, Allyson Story.

Story said the kids idolize skateboarders like Besserve and Gauthier.

“They gain that relationship with the kids, and we have a lot of the same kids coming back when they’re older,” Story said.

One of those returning kids is 16-year-old Isaac Idlout. He’s been coming to the camp for six years now. Besserve said Idlout didn’t know what a skateboard was when he started.

Now, Idlout jumps and glides down rails at the park, while helping out the younger group of skaters.

“If we didn’t have the skate park it’d be pretty boring,” Idlout said after helping a toddler glide down a miniature ramp by holding both the toddlers hands above his head.

This year, 30 kids donned pads and skateboards lent to them by the Makkuttukkuvik Youth Council and participated in the camp.

That’s the largest number of kids ever to attend the camp, Story said..

And that’s partly because summer camps around town have wrapped up, and schools in Iqaluit don’t start until next week, leaving a full week open for kids with free time on their hands.

The skateboarding camp’s intention in previous years, however, was to draw kids who aren’t interested in other activities, such playing games on the Arctic Winter Games Arena’s artificial turf.

“It was just something different for the kids to do,” Story said. “It’s a different type of kid that will come to the skate park, as opposed to the turf.”

The camp ends Aug. 30 with a competition on the final day. The skate park wraps up its season Sept. 15, when the space will be turned back into a curling rink.