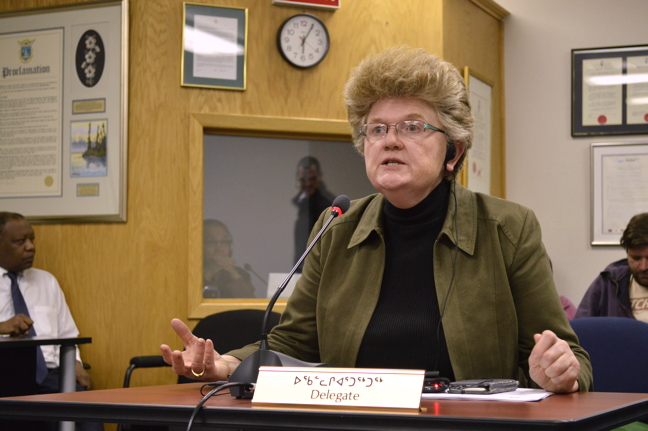 Apex resident Anne Crawford presents concerns to Iqaluit city council Aug. 25 about the recent decrease in trucked water services to some residents of Iqaluit. Councillors decided to hold a public consultation on the issue “as soon as it can be organized.” Mayor Wilman voted against holding such a consultation. She was the only one to do so. (PHOTO STEVE DUCHARME) 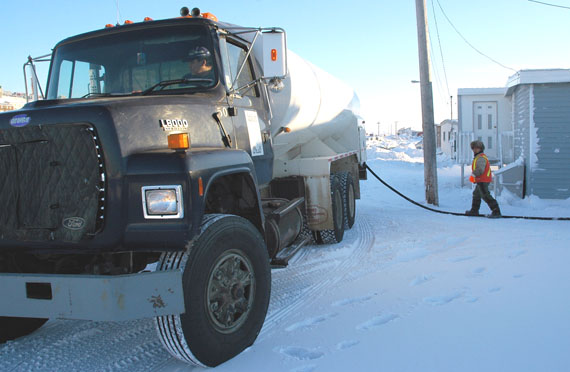 Only 11 per cent of Iqaluit’s population requires trucked water delivery and sewage pump-out — but trucked services account for about 40 per cent of the $8 million budget set aside for water and sewage, the city’s director of engineering and public works, Matthew Hamp, told city council Aug. 25. (FILE PHOTO)

Iqaluit’s city council passed a motion Aug. 25 to hold a public consultation “as soon as it can be organized” about a recent decrease in trucked water services to some residents.

Apex resident Anne Crawford, who lives in one of the 491 residences that receives daily trucked water service, asked for the public consultation when she presented the concerns of a number of residents to council Aug. 25.

“We would like the opportunity to hear from the city the logic behind the change,” Crawford told council.

“There must be logic behind it… but it’s not something we understand.”

Matthew Hamp, the city’s director of engineering and public works, explained some of that logic to council later in the meeting.

In a policy change that started Aug. 19, trucked water service is not available in Iqaluit on Wednesdays except by call-out, Hamp said.

The change was made because the city’s system of delivering water to residents not connected to a water utilidor is “highly inefficient,” Hamp added.

Of the $8-million annual budget allocated for water and sewage services, 40 per cent goes to providing trucked water service, Hamp explained, which only serves 11 per cent of Iqaluit’s population.

The city’s $5-million deficit is growing at a rate of about $1 million each year, chief administrative officer Muhamud Hassan told council, which is why he and Hamp met in early June to talk about cost-saving measures Hamp could implement.

Under the old system, water trucks drove around neighbourhoods looking for water tanks with light indicators on, looping around most streets multiple times a day, Hamp said.

“We’re working with our drivers on more efficient routing,” he said, adding trucks would still look for the light indicators.

In total, over 600 buildings in Iqaluit are serviced by trucked water, including businesses and government offices, Hamp said.

Coun. Terry Dobbin asked Hamp if exemptions would be made for some buildings, such as daycares, which Dobbin said might have to close for a day each week because they can’t afford to pay for a callout.

“People don’t like hearing this, but that’s the cost of doing business,” he added.

But Lauralee Campbell, assistant director of the not-for-profit First Steps Daycare, told Nunatsiaq News outside council chambers that each of the 44 kids at her daycare wash their hands about seven times a day.

“We pay taxes like anybody else, why should we get less water service [than those on a water utilidor]?” McDermott said.

“The city should be going after people not paying their property taxes.”

Those most affected will likely be businesses with higher water needs and homeowners with small water tanks, Coun. Romeyn Stevenson said.

The motion to hold a public consultation — on a date still to be determined — passed by majority, with mayor Mary Wilman the only vote against the motion.

Wilman asked Hamp how many complaints he received from the first Wednesday without trucked water service.

But outside council chambers, where a handful of residents continued a heated conversation after the motion passed but while the municipal meeting continued, Iqaluit resident Crawford told Nunatsiaq News she’s confused by the mayor’s logic.

“I know more than two people called, but they were asked to speak to [Hamp’s] subordinates,” Crawford said.

During the Aug. 25 council meeting, Coun. Stephen Mansell and Coun. Kenny Bell announced they would not seek re-election in the Oct. 19 municipal vote.

On Oct. 19, the same day as the federal election, Iqaluit municipal voters will choose a mayor, eight city councillors and people to sit on the community’s three elected school bodies.