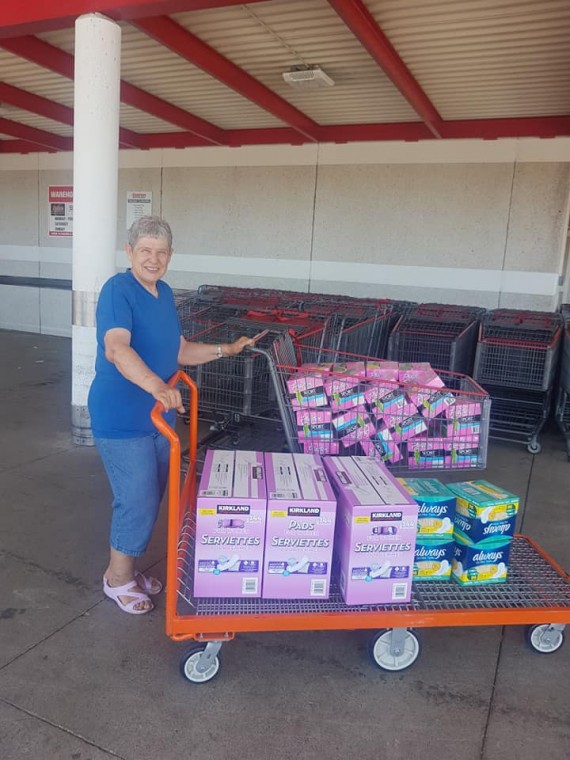 Vicki Briscal, the mother of Patti Krawec, went on a shopping spree for feminine hygiene products to distribute for free in Iqaluit. (PHOTO COURTESY OF PATTI KRAWEC) At grocery stores in Iqaluit, some of the most popular feminine hygiene brands are nearly $20, which is often about twice the price in southern urban centres. A woman from Niagara Falls brought four hockey bags full of menstrual products up during a visit to help those who need them in Iqaluit. (PHOTO BY COURTNEY EDGAR)

She was flying up from her home in Niagara Falls, Ont., to visit her son. When she realized she could bring two suitcases onboard for free, she knew that there would be a lot of leftover luggage space.

So she decided to bring up something for those in need in the community.

Krawec reached out to Michael Murphy, who runs a food drive for the breakfast program at Iqaluit schools, to see what he thought might be needed.

She expected him to suggest canned goods. Instead, he told her that he had heard from some Iqaluit teachers that there was a need for more feminine hygiene products at the schools.

Murphy had just read about how, in other Indigenous communities, girls sometimes miss school during their menstrual cycles, so he told her that menstrual supplies was a much higher priority, but that school supplies, scarves and hats were also needed.

“I thought, I’ll just throw it out to the universe and see what happens,” Krawec said.

So Krawec “rage-tweeted” about the subject. “You don’t need to be visiting family in Nunavut to do something,” Krawec wrote on June 12.

Here are 4 hockey bags full of $1600 worth of menstrual supplies and clothing for a breakfast program in Iqaluit.

I just learned that.

It was retweeted and retweeted. And the universe provided.

Only two days after her call-out for donations, Krawec had received a total of $2,250 sent to her Paypal account, and with the help of donated gift cards she went on a shopping spree for pads, tampons and 19 reusable Diva Cups in both sizes.

Donations came from 24 people across Canada and the United States, most of whom she did not know personally. Donations ranged from $10 to $250 each.

Now, just over a week later, Krawec is in Iqaluit with her four hockey bags filled with the kind of necessities that don’t typically come to mind when one thinks about donating to a school breakfast program. Krawec says her mother Vicki Briscal went crazy with the shopping and even donated her own pile of gift cards to the initiative.

“We cleaned out Walmart and Shoppers of Diva Cups,” Krawec said, laughing.

Krawec also has $400 in Amazon gift cards and $270 in cash to give to other Nunavut communities. And the donations are still coming in.

Now she is trying to plot out how to get those donations and supplies to more remote communities, which might have greater needs. The goal, said Krawec, is to make this a lasting endeavour that spans northern communities.

Romeyn Stevenson, the vice principal at Inuksuk High School, said that staff are conscientious about keeping a well-stocked supply of feminine hygiene products available at at least four different locations.

The school has offered these products to students for free for at least the last 19 years, said Stevenson. And he said students are welcome to take these products home to ensure they have protection after the school day is over.

Stevenson couldn’t speak for other schools, but said he could only assume they have similar stock available at a student’s request.

On Monday, Krawec went with Murphy to the high school and the middle school to distribute supplies. On Tuesday she went to the women’s shelter.

“You can eat Kraft Dinner and hotdogs, but you can’t not bleed for a week,” she said.

Krawec’s initiative is not the first this year to consider new ways of tackling the issue of the high prices of feminine hygiene products. A Quebec-based group called Flo Collective is working to create a customizable subscription service for northern communities so that tampons are no longer about $1 each.

This week at Arctic Ventures some of the most popular brands of tampons like Tampax cost $17.99 for 40 tampons. Those who menstruate typically will bleed for roughly one week, and doctors recommend changing a tampon at least every four to eight hours to avoid infections and toxic shock syndrome.

That means that a menstruating woman could go through at least 21 tampons each month. Over the course of a year, that adds up to anywhere between 250 and 500 tampons, or six to 12 boxes. At Iqaluit retail prices, that could cost between $107.94 and $215.88 a year.

Krawec said everyone travelling to Nunavut communities has the power to help with this. She said she knows that a lot of people will think to pack extra stuff to give to hotel staff when they visit places like Jamaica or Cuba, but when it comes to our own country, the idea seems foreign.

“It was really just a simple easy thing. We had the extra luggage space. People were just crazy generous,” Krawec said.