In wake of yes vote, Iqaluit prepares to move on new aquatic centre 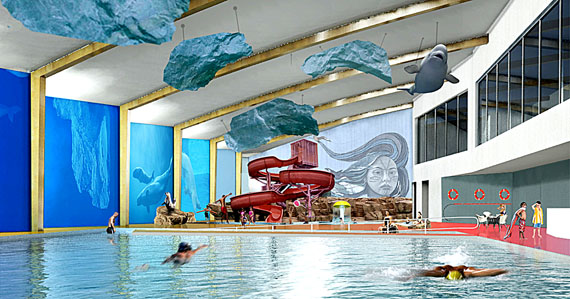 It’s a go: the ratepayers of Iqaluit say the City of Iqaluit can borrow up to $40-million to build a new aquatic centre.

In a referendum on the project, held at the same time as the Oct. 15 municipal election, 49 per cent of eligible, property-owning ratepayers voted.

This means the city can go forward with the third reading of the bylaw, which will allow it to legally borrow the money for the aquatic centre.

But Iqaluit may not end up with a centre as plush as the Malik centre in Greenland’s capital city of Nuuk.

John Graham, who was elected mayor of Iqaluit on Oct. 15, told Nunatsiaq News that the yes vote is a “bold” move from ratepayers — a “coming of age for the city,” he said.

But Graham also said he’s concerned about the cost of the project.

“I spoke to hundreds of people, the majority of folks are well aware of the fact that we need a new swimming pool. But a $40-million version is beyond what folks really expect,” he said. “I’m pleased with the decision, but I just want to caution people — our council is not going to borrow $40-million. We won’t spend one more penny than we have to.”

The new mayor also suggested there needs to be another way to address such an issue other than just restricting the vote to ratepayers.

Amy Elgersma, Iqaluit’s director of recreation and chairperson of the fundraising campaign, was elated by the referendum results. She said the yes vote “shows support of the ratepayers and the community.”

“This will only help us in getting more funding, more support from the community and businesses,” Elgersma said.

Many social and economic benefits will flow from the aquatic centre, because it will help “with retention of employment, and out-migration,” she said.

The centre’s construction will be an economic stimulus for Iqaluit, “great for local and Inuit employment.”

“It will also help make sport and recreation as the norm. Young people really need alternatives,” she said.

Newly re-elected councillor Romeyn Stevenson had one word to describe his emotions after the referendum results: “excited.”

And he sees more money streaming in to the project. This means the city may not need to borrow as much money as it once thought.

“We need to find money from the GN [Government of Nunavut], and from the [federal government]. Both those avenues are still open and plausible in terms of bringing the cost down for the City of Iqaluit,” Stevenson said.

He and Elgersma said this doesn’t bring an end to the project’s fundraising campaign, called “Reach,” which has raised $200,000 of its $3-million target to date.

“There are corporate sponsors in the waiting to say, ‘yes we’ll give money when we see an actual go ahead, an actual project date,’” Stevenson said.