Iqaluit wants to clamp down on stray dogs, arsonists 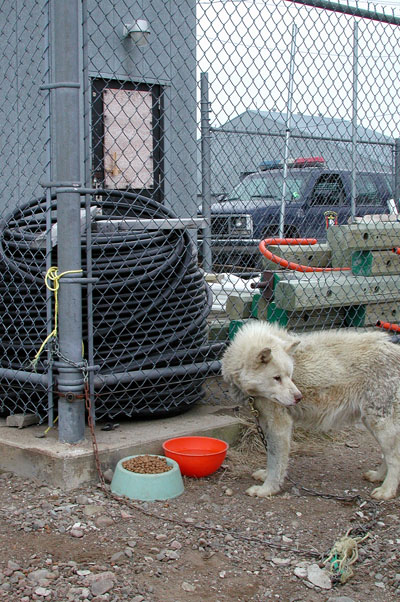 A stray dog bides his time at the Iqaluit pound, in an undated file photo. Iqaluit City Council will soon look at a new dog bylaw, to be introduced as soon as the draft is translated into Inuktitut. (FILE PHOTO)

Public safety issues emerged as a top concern at Iqaluit’s first city council meeting of the summer, as councillors turned their attention to dangerous dogs, fire safety, and municipal enforcement.

Councillors Joanasie Akumalik and Terry Dobbin remarked that unleashed threatening dogs have become all too common.

“We should put a leash on the issue,” Akumalik said at the June 25 meeting. “There are too many dogs around, and they’ve become too much for by-law enforcement and RCMP.”

The councillor recalled strays were a persistent issue for previous city councils.

Dobbin remarked that the city’s public safety committee finally completed a draft of a new bylaw to deal with the problem, which will be brought to the next council meeting, when Inuktitut translations will be completed.

Dobbin pointed to a recent attack by two dogs, described as “short-haired” breeds, around the Northmart store June 19. One store employee was bitten, and an RCMP member shot one of the animals when it attacked the officer.

“There were two incidents in January,” said Dobbin, recalling other attacks this year. “A lady walking home was attacked by two dogs, and a week later there was a taxi-driver that had an encounter with a dog.”

A young woman was seriously injured in a vicious attack by a pit bull dog in July last year, Dobbin recalled, when an owner directed the animal to attack the woman near her home.

“There’s got to be a solution,” said Dobbin. “These owners have to be responsible for their dogs.

Deputy mayor Mary Wilman said work on the new dog bylaw first started under the previous council, thanks to the efforts of former councillor Stephen Mansell.

“Hopefully it will appear in the next council meeting July 10,” she said.

Council turned its attention to another troubling safety issue – fire prevention – when Wilman said that 83 per cent of Iqaluit’s fire losses and two casualties in 2012 were the result of “suspicious fires or arson” caused largely by adults.

The Iqaluit fire chief, Luc Grandmaison, submitted a report to council this past April containing that information.

Only two of the 19 suspicious fires were attributed to minors, said Wilman. The fire department reported these fires caused $7.69 million in damages.

“It’s not young kids that are starting the fires, which is problematic,” said Wilman, who summarized the fire department’s annual report as chair of the city’s public safety committee.

“There is very little prevention,” she said. “We have no devoted resource person right now to do that.”

Councillors agreed to increase prevention efforts through public service announcements, handouts and brochures, as recommended by fire chief Luc Grandmaison, but held off on commitments to assign or hire resource people for the effort until they could discuss its costs.