“[It] makes a difference when you have a good facility” 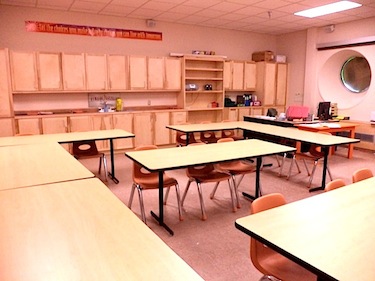 A renovated classroom in Iqaluit’s Inuksuk high school now includes new desks and chairs chosen by the school. And each classroom is equipped with an interactive smart board teaching tool. (PHOTO BY SAMANTHA DAWSON) 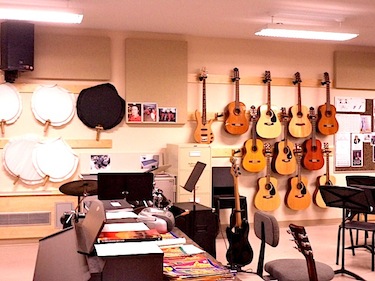 Drums and guitars are some of the instruments purchased as part of the Inuksuk High School makeover and upgrade. (PHOTO BY SAMANTHA DAWSON)

Welcome to Inuksuk High School in Iqaluit, where 400 students in Grades 9 to 12 started classes this past week — and where the school now offers a more high-tech, environmentally-friendly and safe environment for everyone.

That’s what more than $21 million in renovations can achieve.

Now, the worst of the multi-year Inuksuk renovation project is over.

And all that’s left to do are touch-ups next year, such as adding some furniture and renovating the shop area, said Barry Cornthwaite, capital planner for the Government of Nunavut’s education department, on a recent tour of the 42-year-old building.

On display outside the school, you’ll see jaw bones from last year’s bowhead whale near Iqaluit.

And, as you walk into the school, you’ll head into the school’s meeting area, the tisi block, where students play table tennis and host events such as band performances.

The tisi received a new paint job — and in the next round of renovations, will get foldable bleachers. The lift on its stairs was replaced two years ago, but all of the other stairwells were re-done this summer.

So far, the school has also seen the addition of 25 “smart boards.” These are similar to a projector, but have touch-screens and can be used for teaching instead of traditional blackboards.

And these smart boards add to the audio-visual component of the technical upgrades, which also include a speaker system so that students can hear better in each classroom, and television screens around the school that show announcements.

The physical aspect of the school received an overhaul as well.

You’ll see new cabinetry in junior and senior high classrooms, new flooring, new desks and chairs, and the school has been painted inside and out.

This is after most of the first year of the construction project was spent cleaning and washing the school.

Inside the gym, change rooms still need to be renovated. The gym’s floor was refurbished in earlier years.

The only wooden gym floor in Nunavut is lasting well, Cornthwaite said. “[It] makes a difference when you have a good facility,” he said.

This year, the library also received a new floor. But for now, the books remain in boxes and not on the shelves. New books are being ordered, “but other than that we’re doing okay.”

Energy efficiency was another aspect tackled in the renovations, Cornthwaite said: new hallway dimmers, which dim the lights when they are vacant, were installed in 2011.

Although the porthole-shaped windows in the school remain the same, these now feature triple-pane glass for better heat retention.

The music room was equipped with new instruments and a humidifying system to keep its guitars, drums and other instruments in good condition.

Inuksuk now also has a special needs facility, which consists of a room, bed, toilet and lift, to help people out of wheelchairs, for example. The space can also be used as a nurse’s room.

“We can handle whatever type of student comes to the school,” Cornthwaite said.

A new water fountain features a sensor that allows students to fill up their water bottles during the day — and it also counts how many plastic water bottles are being saved.

“It’s a little bit of an environment thing, so it’s nice for the kids to have,” Cornthwaite said.

But “it’s been hard, having to do everything over two months,” he said. The goal of the renovation was to fix up the school but not disrupt the students, Cornthwaite said.

Terry Young, the principal at Inuksuk, said the work that remains won’t interfere with school activities. “Everything’s on schedule here,” he said.

Next up: overhauling the wood and jewelry-making shops downstairs.

Inuksuk, which originally served as a high school for the entire Baffin region, was first slated for a $19-million facelift in 2002.

But those plans were delayed as officials dithered over where to put students during the course of the project and when to start.

The Department of Education finally decided to renovate during the summer months, with a $21.2 million dollar budget.