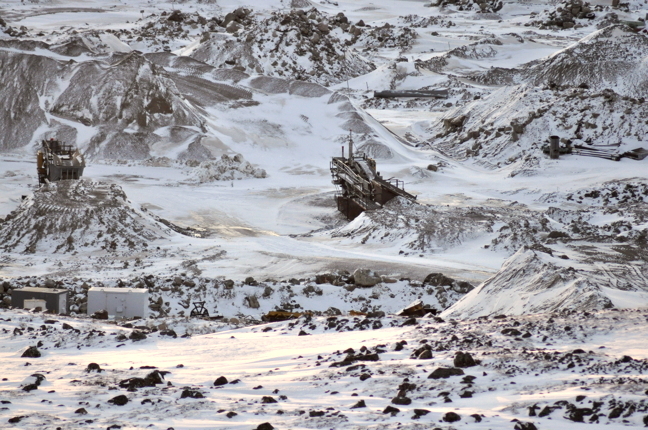 Having exhausted its own supply of gravel, the City of Iqaluit is now buying back its own gravel from contractors. (PHOTO BY THOMAS ROHNER)

Iqaluit’s only gravel pit has dried up, forcing the city to buy back its own gravel from contractors who initially bought the gravel from the city on an honour system, Iqaluit City Council heard at a Nov. 24 meeting.

Deputy Mayor Romeyn Stevenson told councillors that the now defunct gravel pit didn’t make the city much money, and that staff and councillors need to find a new system for selling gravel if they open a new pit.

“If and when we open a new gravel source, we need to ensure we’re being paid for exactly what’s being taken out of it, or contract [its operation] out,” Stevenson said.

“I think the honour system was a failed system in terms of ensuring we got paid for gravel coming out of it.”

The city’s director of public works, Matthew Hamp, who appeared before council Nov. 24, said the Iqaluit’s need for gravel is low and limited to road maintenance.

The city now gets its sand for road use from a site on the Road to Nowhere, Hamp said.

A project to develop a new gravel pit for Iqaluit, called the Northwest Deposit project, was postponed in July, Hamp said, after the city reduced the project’s 2015 budget from over $4 million to about $665,000 in order to reduce the city’s operating deficit.

But by that point, and after tallying bills from the work already done by a construction company and a consulting company, Hamp said costs incurred exceeded the reduced budget of $665,000 by about $32,000.

For that reason, Hamp appeared before council Nov. 24 to ask for a small increase to the project’s 2015 budget, which council approved.

The work on the new gravel quarry project done this year included building 200 metres of road-base towards the new gravel source, Hamp said, located near the now defunct pit at the bottom of Upper Base.

That road would eventually be four kilometres long, Hamp told Nunatsiaq News Nov. 27, but it will up to city council and staff to decide whether the project goes ahead in 2016.

Hamp said the city itself has very little need for gravel compared to industry—such as contractors hired by the city to build roads, or independent companies developing projects.

“There seems to be a lot of stockpiled gravel around town. But how long that’ll last is anyone’s guess,” Hamp said.