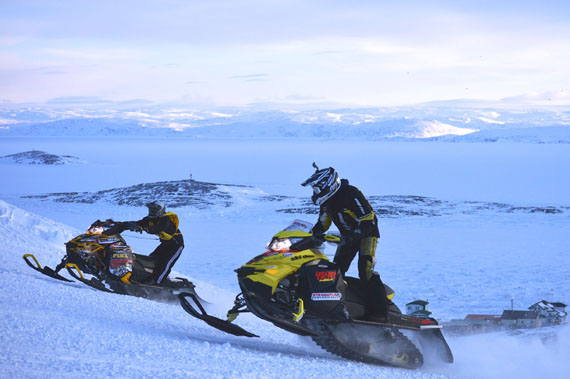 A volunteer-run Toonik Tyme festival in Iqaluit may be over after this year, after its president confirmed that the 2017 festival will be the last time he’ll organize the event, with no heir-apparent waiting in the wings.

The annual spring celebration—which drew record crowds for its 50th anniversary in 2015—has a long history in Nunavut’s capital.

However, in recent years the grassroots society responsible for running the festival has struggled to find volunteers to organize events.

“There’s a lot of well-intentioned individuals that put themselves out to the community and they find that they’re doing far too much and they need to go ahead and get some rest, which is completely understandable,” Cooper said.

This year is no exception, Cooper said, adding that “it’s pretty much ad hoc right now.”

Last year, the Toonik Tyme Society requested that the City of Iqaluit take over management of the multi-day event.

Councillors deferred the matter to the city’s recreation committee, which Cooper said expressed interest in taking over the festival after the meeting.

But the final steps leading to the opening of Iqaluit’s new aquatic centre kept the recreation department from dedicating any time to it this year.

Cooper said he’ll make another request to the city some time after the festival wraps up.

“For the time being, I want to make sure the festival goes off, the events go off and everything goes off on time,” he said.

The official schedule for this year’s Toonik Tyme, which runs from April 13 to April 22, includes:

• the popular Iqaluit-Kimmirut race will return this year, April 15, thanks in part to a $15,000 donation from C & K Services;

• an ice-fishing derby will be held April 16;

• on April 20, a cardboard boat race will take place during the afternoon at Iqaluit’s aquatic centre, with a registration cost of $100 per team, but student entries are free;

• the popular Nunavut metal band, Northern Haze, will perform during the festival, on a date yet to be determined;

• an “Iqaluit Idol” competition is slated for April 20; and,

• a crafts fair will close out the festival April 22.