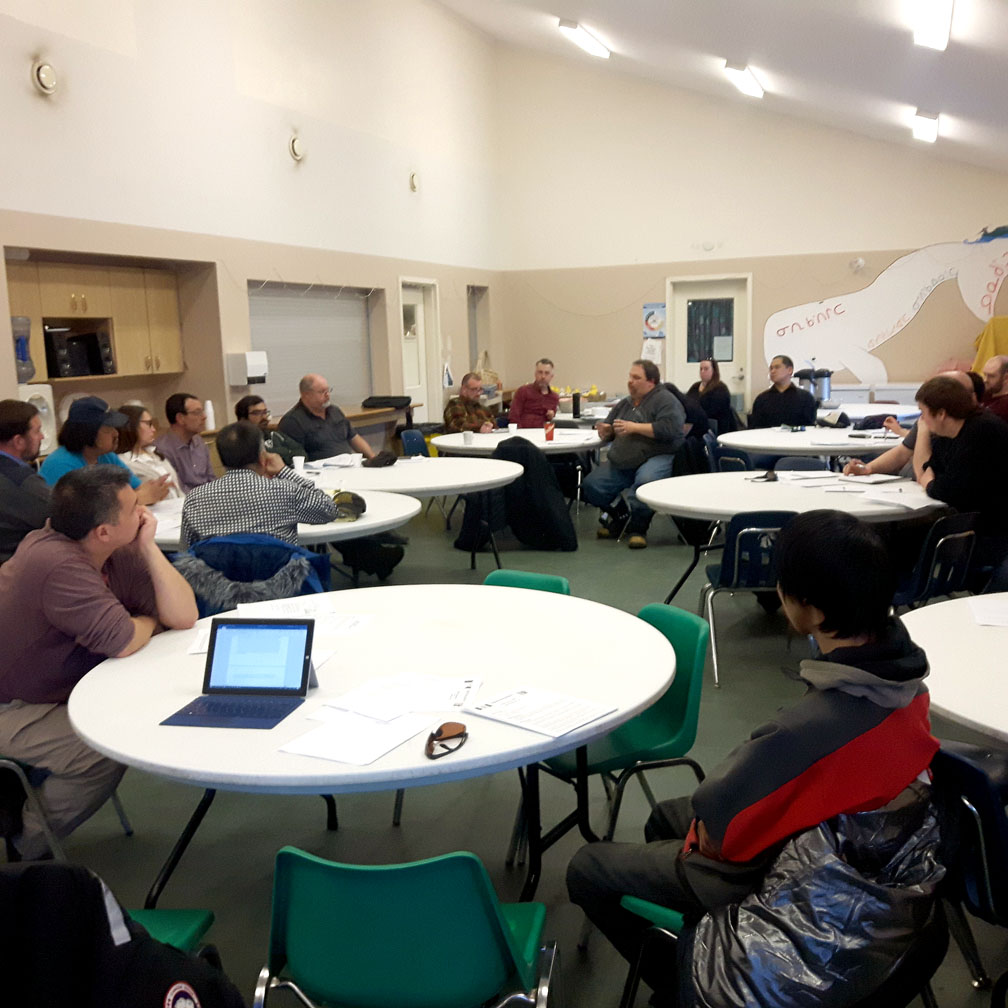 Iqaluit residents at the April 16 annual general meeting of the Uquutaq Society, which oversees the shelter that serves homeless men. They’re now analyzing the idea of purchasing two buildings to offer more space for programming and for a transitional shelter for clients. (PHOTO BY THOMAS ROHNER)

“We’ve been working with the City [of Iqaluit] to plan and purchase two buildings,” the society’s outgoing chairperson, Janet Pitsiulaaq Brewster, told about two dozen people who gathered at the soup kitchen.

“We would use one building for a shelter to house our clients and provide programming space, and an additional building that could provide transitional housing for our clients.”

The current 20-bed shelter on Fred Coman Dr. has been chronically overcrowded for years.

Brewster, who recently secured a letter of support from the Qikiqtani Inuit Association, did not say which two buildings in Iqaluit are on the society’s radar.

But after exploring a number of options, she said the society wants to either buy those two buildings outright or in partnership with another organization.

Matthew Clark, the society’s treasurer, said the outgoing board has laid out a plan to acquire the buildings.

“I’m really into finances and have been pushing a lot of questions. We are asking those questions and ensuring it makes sense,” Clark said.

Iqaluit Mayor Madeleine Redfern attended the meeting. She said the city helped facilitate three assessments over the past year for the society, for a total of $95,000.

Those assessments, which were paid for by the federal and territorial governments, included building a business case and assessing operations and capacity training.

“Nobody’s going to move forward with a big initiative like this without significant analysis,” Redfern said.

Meanwhile, more and more men from across Nunavut are using the shelter’s services, the shelter’s acting manager, Guy Boulanger, said at the meeting.

Boulanger presented the shelter’s 2017-18 annual report, which said the shelter operated at 166 per cent of its capacity last year, compared to 133 per cent the previous year.

“The average age of our client is 43, and their length of stay is anywhere from a few hours to over eight years. Long-term clients have no means of escaping shelter life due to the usual reasons for homelessness—a lack of affordable housing, mental illness and poverty,” Boulanger said.

He also noted the opening of the beer and wine store in Iqaluit about a year ago has had an impact on the shelter.

Those impacts include more men showing up intoxicated, but binge drinking and aggression appear to be down.

Brewster said one of the biggest concerns is where men go if they are turned away from the shelter.

“We’re just as concerned with their safety as those who are following the rules. We are trying to capture data so the board can make informed decisions on whether we should have a wet or a semi-wet shelter to provide that safe space,” she said.

According to their audited financial report from 2016-17, the society received the bulk of its funding—$377,000 out of $635,000—from Nunavut’s Department of Family Services.

With an eye on acquiring the new buildings and offering greater support to their clients, Brewster said the society would seek additional funding from the department.

Added space and programming is much-needed, because the face of homelessness in Nunavut is changing, said Brian Tagalik, who attended the meeting.

“Recently, I turned around and suddenly I’m homeless and it hurts. I thought of the shelter, but I didn’t know if I was welcome there, just to say I need a bed for a night. Homelessness is such a serious issue, and I feel I have a lot to give, I had to come here tonight,” said Tagalik, tearing up.

At the end of the meeting Tagalik was one of 10 people voted onto the new board of directors, along with at least two other Inuit and one woman.