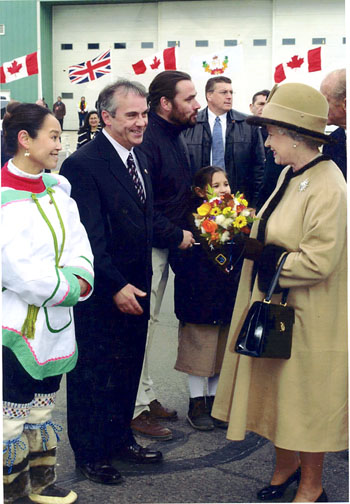 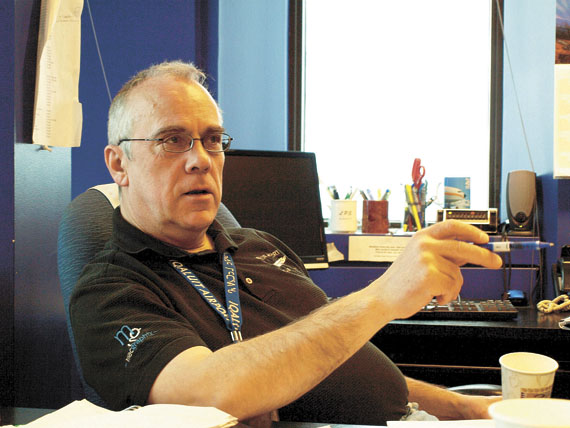 John Graham, Iqaluit’s airport manager, in the seat he’s occupied for the past 15 years, overseeing daily operations at the busiest airport in Nunavut. On Feb. 3, Graham will retire from his position to take a job with an as-yet unnamed private company. (PHOTO BY DEAN MORRISON)

“Be ever vigilant” — those are the words that John Graham, Iqaluit’s veteran airport manager, has lived by for the past 15 years.

On Aug. 14, 1996, at 9:00 a.m. Graham took a seat in the chair that he would occupy for the next 15 years on the second floor of Iqaluit’s bright yellow airport, reviewing the airport’s safety plans.

Outside his window, a squadron of CF-18’s were taking off as part annual military exercises in Iqaluit.

Graham watched with excitement as one of the jets began to take off.

“I wasn’t sure if the pilot was going to land or what and then the pilot ejected right at the end of the runway,” Graham said.

“The plane went down over the road and blew up in a huge mushroom cloud not far from the sewage lagoon.”

That day Graham earned that, in a job where safety is always the highest priority, things can change in a heart beat.

“It was a pretty dramatic first day as the airport manger.”

But on Feb. 3, Graham, 55, will turn in his keys and embark on a new career – for an employer he has been sworn not to divulge.

“When the time comes, the information will be released,” Graham said with a smile.

For almost 16 years now, Graham said even on the darkest of days he has never woken up and wished he didn’t have to go to work.

“I think in this day and age that is pretty special,” Graham said.

As airport manager, Graham estimates he has overseen the safe execution of more than 250,000 aircraft takeoffs and landings, the importation of millions of pounds of freight, and moved 1.2 million people in and out of Iqaluit.

While growing up on a farm outside of Selkirk, Scotland, Graham always had his eye to the sky and was fascinated by aviation and space exploration.

“I was a youngster growing up in the 1960s, right at the height of the moon program, so I always new I would do something with flight,” Graham said.

Graham said when he was growing up in Scotland, most families had their children’s futures planned out.

So, it was taken for granted he would join the Royal Air Force.

But that’s not how Graham found find his way into aviation.

In 1976, Graham read an ad in a local newspaper looking for young men to travel to Canada’s north where they would work in the retail and fur industry for the Hudson’s Bay Company.

“There really wasn’t much thought process that went into deciding I would move to the Arctic,” Graham said. “I read the advertisement and said, jeepers, I’m going to apply.”

Graham got the job and arrived in Frobisher Bay, as Iqaluit was then called, where he started working for Gordon Rennie and the Hudson’s Bay Company.

At the HBC store, then located at the Astro Hill complex near the Frobisher Inn, Rennie was a legend in the company, Graham said.

“He had been in the service of the HBC since 1947, 30 years before I joined in 1976,” he said. “The Frobisher Bay store was the biggest one in the HBC’s northern empire.”

When Graham arrived in the North, the fur trade was still an important economic driver of the Arctic economy. But Graham ended up being the last person Rennie trained to grade sealskins.

“When you are young like that you don’t feel like you are doing anything with a historical perspective,” Graham said. “But trading furs, that is a part of Canadian history.”

Graham was recently featured in a documentary produced by the BBC that follows the stories of a handful of young men that set out in the 1970’s from Scotland to work for the Hudson’s Bay Company, entitled The Hudson’s Bay Boys, which screened Jan. 6 at the Legion in Iqaluit.

But Graham had not given up his dream of working in aviation.

On his days off from the Bay, Graham could be found outside the airport’s fence tracking the flight numbers of planes flying in – a hobby Graham likens to stamp collecting.

In 1981 a job opportunity came up with the Government of the Northewest Territories; Arctic airports program, and Graham jumped on it, becoming the regional manager for the Arctic airports at that time still under the control of the GNWT.

He held that job until his current position became available in 1996.

Looking back at his time as Iqaluit’s airport manager, Graham recalls a number of highlights that stand out for him.

“One of the greatest weekends for the Iqaluit airport in terms of airplanes was during the Arctic Winter Games in 2002,” Graham said.

“In a period of about 48 hours, we had something like 340 airplanes moved through here,” Graham said. “It was a modern record for the Iqaluit airport.”

The visit of Queen Elizabeth II to Iqaluit in 2002 remains another standout memory.

“That was planned to the nth degree,” Graham said. “To the point where I went out with a spray can and marked with an X where the plane was going to put its nose.”

But the event that makes Graham most proud was the use of the Iqaluit airport as place where the Airbus A380 made its first transatlantic flight and where it conducted its first cold weather testing.

“This was the most revolutionary thing since 1969 when they launched the Boeing 747,” Graham said. “People in other airports across the country and the world laughed at me for thinking I could get the Airbus A3-80 to come up here.”

But Graham did just that, travelling with a team from Nunavut’s Department of Economic Development and Transportation and the Iqaluit Airport Authority to the Paris air show in 2005.

The representatives from Airbus in Paris were mpressed with the Nunavut delegation’s determination.

“I was just so focused on getting the Airbus A380 that it was unbelievable,” Graham said.

When Graham starts the next step in his career, he will be well served by the dogged determination and singularity of focus which have served him so well since he arrived in Iqaluit in 1976.