“They want to take away our authority, and the rights we have as local members” 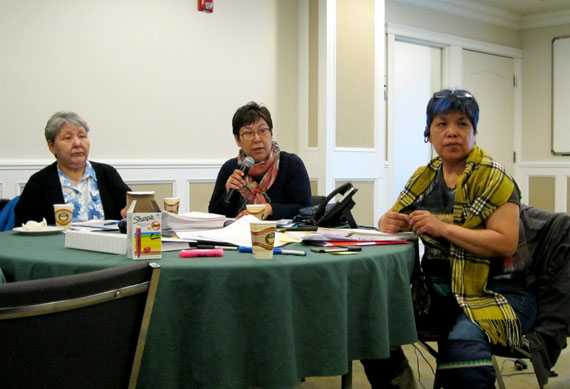 Donna Adams of Rankin Inlet, chair of the Coalition of Nunavut DEAs, puts a question to a presenter at the coalition’s board meeting in Iqaluit March 29 as Nikki Eegeesiak, executive director of the coalition, right, and board member Uluta Ivalutanar of Naujaat listen to the discussion. (PHOTO BY PETER VARGA) 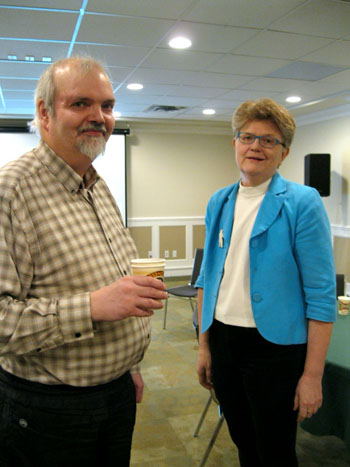 Anne Crawford, legal consultant for the Coalition of Nunavut DEAs explained to the coalition’s vice-chair, Doug Workman, left, and to the board at large March 28 about how Bill 37 will affect the territory’s 26 school bodies. (PHOTO BY PETER VARGA)

Despite government claims to the contrary, Nunavut’s 26 district education authorities maintain that a Nunavut government bill to amend the Education Act tabled March 7, will centralize control of school administration within the GN’s administration in Iqaluit.

“Nobody knows why they’ve come to that decision to take more control,” said Donna Adams, chair of the Rankin Inlet District Education Authority and chair the Coalition of Nunavut DEAs.

The government “is wanting to standardize things and put us in a box, like ‘one size fits all,’ and it’s not,” Adams said on the second and final day of a coalition meeting in Iqaluit, March 29.

Just days after the government tabled its amendments to the education act within Bill 37, the Department of Education said the DEAs would in fact have a greater say on education policy through a new Council of DEAs – which will replace the Coalition of DEAs.

But the Coalition of Nunavut DEAs says the government is actually taking away control from local school groups on all fronts, including such matters as hiring school staff, language of education, early childhood education, school schedules and school programming.

Coalition directors concluded at their two-day meeting that the government has not made good on its promise to hear out DEAs’ concerns made in written submissions and public consultations, which began in 2015.

“For the last year and a half, we’ve been getting a lot of information from the department on policy intentions,” Doug Workman, vice-chair of the coalition and chair of the Iqaluit DEA, told the board.

“They’ve always said we’re listening to you. You know what, they haven’t listened a damn bit.”

Government proposals that the coalition considered last spring have hardly changed at all, Workman said.

“They’ve changed some words, they made it sound a little nicer, but they haven’t changed very much from last year this time, and it just makes me sick,” he said.

“It’s all about their control, and to hell with the rest of us, those of us who’ve been elected by our communities to represent the best needs of our children. Frankly, we’re being told by the department, this government, this minister, ‘go to hell, get the hell out.’”

The new Council of DEAs will have many of the same responsibilities as the Coalition of Nunavut DEAs, but unlike the coalition, which sets its own goals and priorities, the Council’s roles are clearly set out in Bill 37.

Workman and other Coalition of Nunavut DEAs board members said they believe the government concluded that district education authorities, which assumed their current role under the territory’s Education Act of 2008, have failed to live up to their mandate.

Board members said the government gave DEAs big responsibilities with too few resources to carry them out.

Rather than shore up DEA resources and make an effort to ensure they can carry out their work, the coalition believes the government has now chosen centralize power in the Department of Education, at the expense of local control in the communities.

“It’s like coming out with a measuring stick, and measuring how badly we’ve done and looking at all the negativity,” Adams said.

“They way they want to take away our authority, and the rights we have as local members, its just feels like they don’t want to give us a second chance.

“They don’t give the time to explain, there’s no teamwork, there’s no spirit of collaboration.”

In a presentation on how Bill 37 alters the roles and responsibilities of DEAs, the coalition’s legal consultant, Anne Crawford, said the documents and associated legislation are complex, and the government has done too little to clearly explain proposed changes to regulations on education.

“As a trained lawyer, I’ve struggled with them,” Crawford, who is also a DEA member for Apex, told the coalition’s board of directors.

Bill 37 has gone to the legislative assembly’s standing committee on legislation, which has asked the coalition to make a submission by April 21.

The standing committee usually has 120 days to review legislation after it passes second reading in the assembly.

The April 21 deadline—just 46 days after second reading—shows the government is shortening time-frames to push the bill through as quickly as possible, Crawford said.

That, she added, is because the next territorial election is in September, “and this legislation is one of the important achievements this government wants to put through,” she said.

“I suspect this timetable depends entirely on how much concern is raised, and how many people and how effectively people suggest that there need to be changes.”

Bill 37 curbs the DEAs’ administrative authority on matters such as hiring of staff for schools, Crawford said.

Decisions on hiring principals and vice principals, for example, used to be carried out by a panel of the DEA members, with one government member.

Bill 37 calls for a panel of government officials, with one DEA member, Crawford told the coalition board. This means principals will be less concerned about getting along with the DEA to keep their job, she said.

Bill 37 also says student enrolment, which is now completely within the DEAs’ authority, will fall under the authority of the education minister, meaning “whoever the minister authorizes down the line, can make those decisions,” Crawford said.

Coalition board members questioned the government’s commitment on implementing Inuktut as a language of instruction from kindergarten through to Grade 12.

Workman said the government’s struggle to meet its goals on Inuit-language instruction are hampered by the lack of school administrators who can actually speak the language.

“We certainly need inspectors who will be able to supervise and ensure that the quality of Inuktitut programs are being delivered through all the schools, so that we can ensure that the standard is at the level it should be,” he said.

“There needs to be a commitment, and the only way we can make that commitment is to include it in the act.”