Operation Nunalivut to kick off April 10 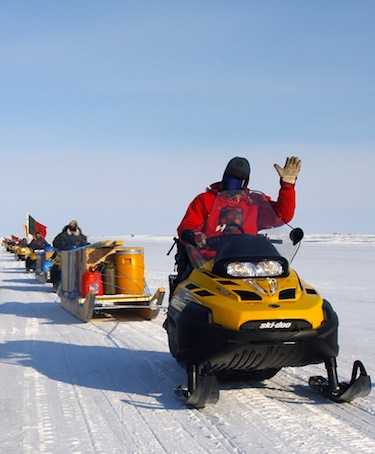 Canadian Rangers on their snowmobiles parade in front of visitors during the 2010 Operation Nunavlivut in Alert. (FILE PHOTO)

In this year’s operation, members of the Canadian Forces and Rangers will respond to two different scenarios.

The first, near Beechey Island, will test search and rescue training with a dive operation.

The op centre will be located in the recently-renovated and expanded Polar Continental Shelf Program facility. That facility now includes a new wing with 100 more beds for the Canadian Forces Arctic Training Centre, “a multi-purpose facility for Arctic military training as well as operations.”

During Nunalivut 2012, a ski-equipped Twin Otter will carry material for troops on the sea ice.

And a CC-130 Hercules, a CH-149 Cormorant helicopter, and a CC-115 Buffalo will also head to Resolute Bay to transport fuel, rations, snowmobiles and personnel.

A combined dive team is slated to visit Devon Island, where they will conduct diving operations as part of Defence Research and Development Canada’s $10-million northern watch project.

That project installs undersea surveillance devices in various locations along the Northwest Passage.

The divers will also conduct a remotely operated vehicle survey of HMS Breadalbane, a Franklin expedition rescue ship that sank in 1853, which is the world’s most northern ship wreck and a national historical site.