It’s not too late to fight the flu: Nunavut health officials 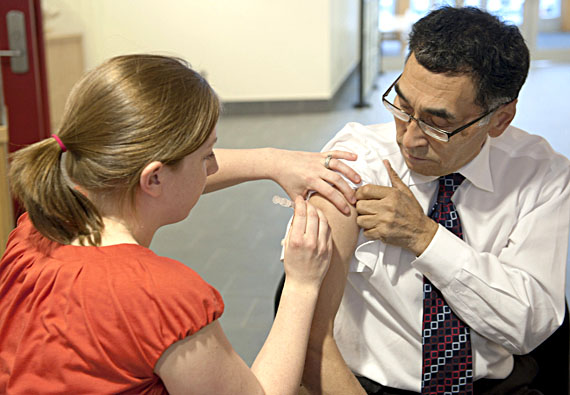 This year’s flu vaccine campaign kicked off October, 2011 at Nunavut’s legislative assembly in Iqaluit, where former health minister Tagak Curley was among the first to receive the vaccine. So far, only 17 per cent of Nunavummiut have received the vaccination. (FILE PHOTO)

Nunavut health officials are encouraging members of the public to get vaccinated against the flu, if they haven’t already.

The Department of Health and Social Services put out a news release Jan. 30 urging Nunavummiut to protect themselves against the flu, as the territory recently recorded its first case of influenza this season.

Flu shots are available free of charge at health centres across Nunavik or at the Public Health building in Iqaluit.

But only 17 per cent of Nunavummiut have opted to be vaccinated since the health department launched its seasonal campaign in October, 2011.

Health officials call that percentage “very low” – particularly as the department’s goal this year was to vaccinate at least 50 per cent of the population and 70 per cent of children between two and four years of age.

Young children and the elderly remain most at risk, they say.

But for some reason, health officials haven’t been able to convince the majority of Nunavummiut to get vaccinated. In 2010, only 25 per cent of Nunavummiut received the vaccine.

You can also protect yourself against influenza by regularly washing your hands and coughing and sneezing into your sleeves, the GN says.

Symptoms of flu could include fever, chills, coughing nausea, sore muscles and fatigue.

“People, who have the flu or flu-like symptoms, should stay home until they are symptom-free and able to return to normal activities,” Osborne said.