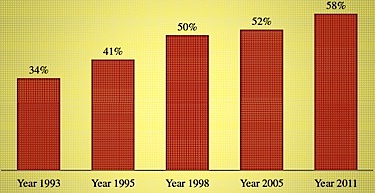 This figure from the “Jobs in Nunavik” 2011 survey shows how many more jobs require post-secondary studies than before. 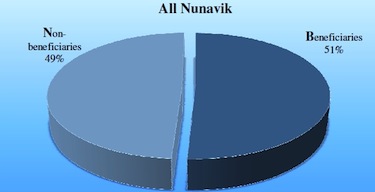 This figure from the “Jobs in Nunavik 2011” survey shows the split of jobs between Inuit and non-Inuit.

KUUJJUAQ — Nunavik Inuit are losing ground to non-Inuit when it comes to jobs, a new survey for the Kativik Regional Government shows.

But the percentage of full-time jobs held by non-Inuit has grown.

This increased by 46 per cent between 2005 and 2011, while full time jobs held by Inuit increased by only 19 per cent during the same period.

That’s down from 56 per cent in 2005, when the last job survey was conducted.

The huge majority of workers in regular part-time jobs remain Inuit, although non-Inuit have made strides in the number of part-time and seasonal jobs they fill in Nunavik.

At Xstrata’s Raglan nickel mine in Nunavik, non-Inuit workers are taking more than eight in 10 jobs.

Only 15 per cent of the workers on site are Inuit, that is, 162 workers out of 1,083, according to statistics tabled Nov. 29 at the KRG council meeting in Kuujjuaq.

While about half of Nunavik’s workforce are women, jobs in mining are also leaving women behind, with only one in 10 mine jobs being held by a woman.

“For instance, jobs in mining require not only trade certifications but also university degrees (geologists, engineers, etc.) and college diplomas (mining technicians, etc.). There is a wide variety of positions in Nunavik but 58 per cent of full-time positions require post-secondary education or trade certification. Therefore, a lot of jobs still cannot be filled by the local workforce,” it states.

Of Nunavik’s 7,000-plus jobs, 654 are actually located outside Nunavik, mainly in Montreal.

Most of jobs in Nunavik organizations that are still located in Montreal are held by non-Inuit, more than eight in 10.

With the Plan Nord, and the thousands of jobs linked to the development of northern Quebec, “getting more qualified workers into mining related positions will be quite a challenge,” the survey concludes.

“There is a limit for the relatively small Nunavik population to generate miners and other specialized workers,” it says.

To improve the situation, the KRG’s sustainable employment department has started a new youth employment service, called YES, which will work try to encourage youth to continue their education and increase their “employability.”

The KRG is also involved in a work training program, called Tamatumani, at the Raglan mine, which has managed to transform the turnover in its participants from the norm of 70 per cent among Inuit workers at the mine to 70 per cent retention.

The KRG has also wants Nunavik to become its own trades region under Quebec’s Commissions de la construction du Québec, a move which could encourage more Inuit to get into the trades.

Speaking at the meeting Nov. 29, Emudluk enouraged youth to continue their education.

This figure from the “Jobs in Nunavik 2011” survey shows that outside the mining industry, most jobs in Nunavik are still held by Inuit.