Judge shortage worsens with changing of the guard at Nunavut court 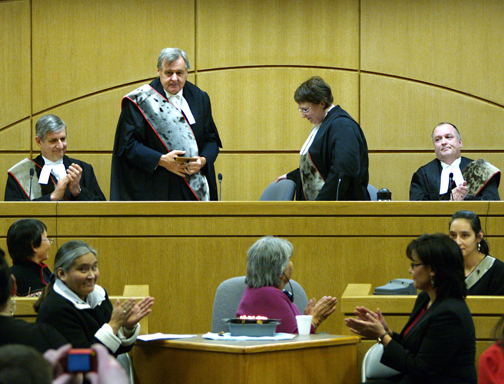 Neil Sharkey, top, second from left, sworn in as Nunavut’s fourth judge in February 2009. Sharkey, who has practiced law in Iqaluit since 1986, was the first Nunavut-based lawyer to be appointed to the bench. Justice Beverly Browne, who left the Nunavut court in October 2009, is standing to the right of Sharkey and the now retired Justice Earl Johnson is sitting to his left. On the far right is Justice Robert Kilpatrick, who retired Sept. 20. (FILE PHOTO)

A recent changing of the guard at the Nunavut Court of Justice has created yet another empty seat on Nunavut’s bench.

The veteran Senior Justice Robert Kilpatrick, who has served in that position since October 2009, retired Sept. 20, making way for a new senior judge: Justice Neil Sharkey, who took the position on Oct. 1.

Sharkey is Nunavut’s third senior judge. The first was Justice Beverly Browne, who served in that position from April 1, 1999 until October 2009.

Kilpatrick stepped into the senior judge’s position in 2009 after Browne left to take a seat on the Alberta Court of Queen’s Bench.

His departure means that as of Oct. 1, there are two empty judicial seats in Nunavut, the office of the senior judge told Nunatsiaq News recently.

“These [vacancies] are a result of Justice Kilpatrick’s retirement and the vacancy created by Justice Earl Johnson on September 30, 2015,” Clare Henderson, the Nunavut court’s executive legal officer, said in an email.

Nearly a year ago, Kilpatrick made a rare public comment about the need for more judges in Nunavut, where only four of six judge’s positions are currently filled.

“The [Nunavut Court of Justice] will likely be unable to meet all of its core commitments in 2016 without further judicial appointments,” Kilpatrick said in December 2015 at the swearing in ceremony of Justice Paul Bychok.

The Nunavut court had to cancel a jury trial scheduled for February 2016 and converted two court circuits from Nunavut Court of Justice sittings into Justice of the Peace Court sittings, Henderson said in another email.

“This was after reducing the schedule by 16 sitting weeks already when setting the 2016 schedule in anticipation of the vacancies. The Court is presently trying to find a deputy judge to preside over an upcoming circuit as well so there may be further cancellations,” Henderson said.

Judicial appointments are made by a federally-run screening committee but that committee had not met to vet candidates in four years at the time of Kilpatrick’s comments.

The federal justice minister makes appointments based on the committee’s recommendations.

The minister made appointments in June in Alberta, Ontario, Quebec, British Columbia and for the federal court of appeal, but has not made any appointments for Nunavut in 2016.

To make up for the lack of a full complement of judges, the court often relies on deputy judges from other jurisdictions, appointed by the federal minister of justice.

But over the past several years, nearly half of Nunavut’s 92 deputy judges have been lost to retirement or sickness, Kilpatrick said in 2015.

“If no deputy judge can be found to take the place of a resident judge, circuit [courts] may have to be cancelled. This court is acutely aware of the terrible stress that delay has on families in crisis,” Kilpatrick said in 2015.

The stress on victims involved in the criminal justice system in Nunavut is indeed terrible. While a recent report did applaud the court’s efficiency, it gave the Nunavut justice system a failing grade, or “F,” for its support of victims.

Henderson said the Nunavut court looks forward to the appointment of resident judges, since a full bench is important to the administration of justice.

“The court understands that this process may take time and is hopeful that in the interim the minister will be appointing additional deputy judges to the court to alleviate the impact of the two vacancies on court scheduling.”