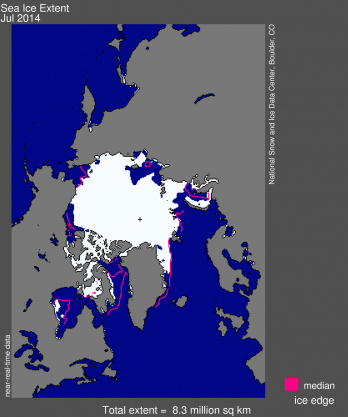 Arctic sea ice extent for July 2014 was 8.25 million square kilometres, as seen in this image. (PHOTO COURTESY OF THE NSIDC)

Arctic sea ice retreated quickly through the first three weeks of July, slowing towards the end of the month with a shift in weather patterns.

But ice extent is still below average in nearly all regions of the Arctic, noted the U.S. National Snow and Ice Data Center, with July 2014 ending with the fourth lowest Arctic sea ice extent on its satellite record.

In the first three quarters of July, ice extent declined at an average rate of 86,900 square km per day, which comes close to the 1981 to 2010 average for that month.

But while high pressure sea level dominated the central Arctic Ocean for much of the month, this pattern broke towards the end of July. It was replaced by a lower-than-average pressure that tends to bring cool conditions; the shift in winds often seen with that pattern tends to spread the ice out, the NSIDC said.

In the Canadian Arctic, Hudson Bay, Baffin Bay and Davis Strait are now mostly ice-free, the report noted, although channels of the Northwest Passage remain choked with ice.

The NSIDC pointed to the relatively low ice extent reported last March as having created the conditions for this summer’s low ice extent.

At the other end of the Arctic, the advance of sea ice in Antartica nearly halted for a week in early July, but then resumed. By the end of the month, the sea ice extent in Antartica was at or near record high for this time of year, the NSIDC said.