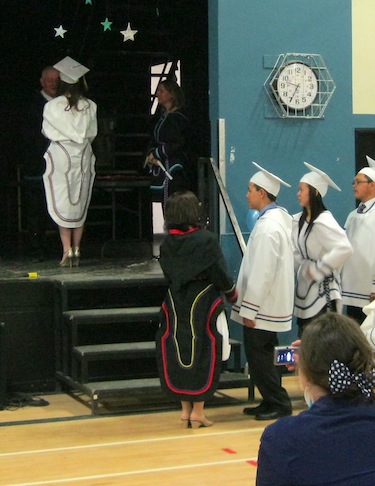 Graduation ceremonies at Inuksuk High School, June 1, marked a milestone not only for the Class of 2013, but for the school itself, says outgoing principal Terry Young.

This year’s class of 2013, amounting to 40 graduates, is almost double the number that Young saw at the start of his tenure at the school 13 years ago, Young said.

Then, the average annual number of graduates ranged between 18 and 25 students.

“Overall, the average number is way above what it was if you go back five to ten years ago,” said Young, who is leaving his position the school to become president of the Nunavut Teachers’ Association.

While at Inuksuk, Young saw a steady growth in numbers of graduates to numbers ranging from 40 to 55 in recent years.

“There’s a wonderful group of leaders within the group, and with lots of opportunities,” Young said of this year’s graduating class. “There’s lots of support for those who want to take advantage of it in Inuksuk High School.”

Support from many community groups and agencies for the school’s wide range of programs help drive Inuksuk’s success, he said.

Awards for student achievement were handed out this year by no fewer than 10 private, public and community agencies, ranging from Canadian North airline to the Nunavut Speed Skating Association.

And staff who are well-established in Iqaluit and involved with all activities also contribute to the school’s onsistent success, according to teachers and administrators.

“We all work really well as a team,” said Renata Solski, who has taught at Inuksuk for 10 years. “We support each other and I think that really makes a difference.”

Solski was one of five teachers who organized and directed the June 1 graduation ceremony and celebrations. Fellow teacher Linda Grant organized the creation of the student’s prom night venue in the school’s foyer.

Grant’s art students also created an ornate park-like setting for the event, which took place in the evening of graduation day.

“Every single staff member is involved,” Solski said of the day’s graduation celebrations. “That’s what’s so nice about this school.”

This year’s ceremony was particularly memorable for vice-principal Romeyn Stevenson, who witnessed the graduation of his daughter and his niece.

Stevenson, who has worked for nine years at the school as an administrator and, for his first five years, as a teacher, recalled seeing many of the students grow up.

“I taught a lot of those kids who were up there,” he said. “So it feels pretty good to see them graduate.”